I just got a sneak peak at the 2009 Fox Racing Shox catalog and boy are there some great new innovations they are packing into their already-strong lineup of forks. New crowns, new steerers, new sealed lockout mechanism, and entirely new TALAS 32 and 36 models that include a 150mm travel 32 TALAS and oh yeah, a new little thing called the 15QR.

I’ve long been a detractor of the current 9mm quick-release standard and have exclusively ridden 20mm thru-axle forks since my first Marzocchi Z1 in 2001. The difference in torsional-rigidity between a 9mm quick-release and a 20mm thru-axle is huge… so much so that I simply don’t consider the standard 9mm dropout to be an option. Not that I’m a DH racer or a roof-jumping freerider, I just like my front wheel to track straight and true with no noticeable flex, that’s all. I believe you should too.

And, with the myriad of forks using the 20mm thru-axle, I have yet to feel limited in my fork selection. However, with the new 15QR standard coming on the 2009 Fox 32 and F-Series forks, I will now have another set of fork options to choose from. So, lets dig into the nitty gritty on the new 15QR. 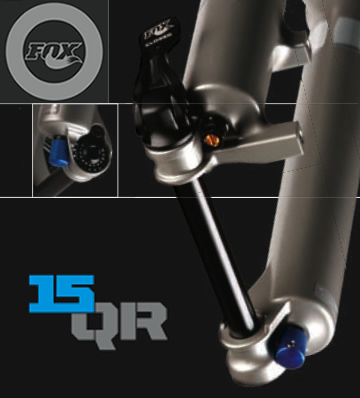 About the Fox 15QR Thru Axle

In the beginning, mountain bikes used borrowed standards from road bikes. Quill stems, drop bars, lever shifters and the infamous 9mm quick-release axle standard were all adopted from roadies. Thankfully, many of that hand-me-down technology has since been replaced by better and stronger parts made specifically for mountain bikes… everything except for those wimpy 9mm skewers keeping your fork and wheelset from separating themselves and causing you some serious grillwork.

Yeah, those spindly things are relics in my book, hence my adoption of 20mm thru-axles. However, looking over the new 15QR jointly-developed by Fox and Shimano, I’m sold and here’s why:

While I’m stoked on this new design, it doesn’t come without some concerns. The most obvious one is that anyone wanting a new 15QR fork will need to upgrade their front hub, which isn’t cheap or easy. It’s something that many people simply won’t be willing to do. My other concern is that it’s not really that much different than the current 20mm thru-axle standard. I’m not a gram-counting weight weenie, so dropping 71 grams is not worth the hassle in my book.

And, what about bike racks? Many people will have to upgrade their fork-mounted bike racks in favor of upright racks or hitch racks… another potential expense for someone wishing to upgrade to the new 15QR.

However, I can only hope that the 15QR catches on and we finally see the 9mm quick-release die a fast death. Thru-axle designs are noticeably stiffer, they track better and have been just as easy-to-use for several years. The Fox 15QR design will be available as an option on their entire 32 and F-Series lineup for 2009. And, as a result, I’m crossing my fingers that this signals the end of skewers as we know them.