Want to saddle up in Yosemete? How about pedaling the East Rim of Zion Canyon? What about a mountain bike traverse of the Olympic National Park? Well, it’s not quite here, but the ball is in motion for opportunities to ride in America’s National Parks.

Currently, mountain biking is seen as “motorized” in National Parks and hence is off limits. While some areas within our national treasures will always remain off limits to mountain biking, there are some prime trails that have been debated for years. Why not allow mountain biking in certain areas of our National Parks? So long as mountain bikers can be good stewards and consistently obey trail etiquitte, I believe there is no reason to enforce an across-the-board ban on two-wheeled travel.

Again, this new rule change does not mandate that parks allow mountain biking at all. It merely will open up the decision to be made at the local park level instead of mandated by stuff shirts in Washington DC. Here’s to riding at a National Park near you. 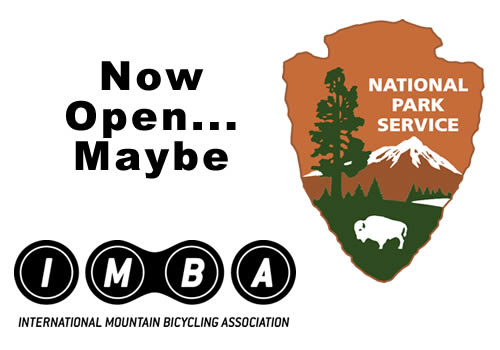 More Details on Mountain Biking in our National Parks

An upcoming National Park Service (NPS) rule change could greatly benefit mountain bicycling by improving the administrative process for opening trails to bicyclists. IMBA has been asking the agency to revise its policies since 1992, because the current “special regulations” process is needlessly cumbersome and treats bicycles like motorized vehicles.

The NPS has said the proposal for new rules will be formally announced later this year. IMBA hopes the enhanced procedure will allow park superintendents to make trail access decisions locally, instead of being tied to a Washington-based, multi-year regulatory journey. The new rule would treat bicycling like other non-motorized trail users, such as equestrians.

The suggested NPS rule change would only apply to places where including bicycling is deemed non controversial, and would maintain current requirements for environmental review and public notice. Opening a trail to bicycling must be done in compliance with the National Park Service Organic Act, the National Environmental Policy Act (NEPA), the Historic Preservation Act, and all NPS General Management Planning processes.

Recently, the American Hiking Society (AHS) published a national action alert opposing the as-yet-unreleased NPS rule. This alert is based on the incorrect assumption that requirements for comprehensive environmental review and public commentary about opening a trail to bicycling will be discarded. In fact, these safeguards will remain in place, as required by federal law. IMBA and AHS leaders met nationally on this issue a few weeks ago.

Unfortunately, the alert has rippled through the hiking community, causing consternation and confusion amongst the shared-use trails community. Some hiking-based groups have expressed concern that mountain biking will infringe on foot travel, but IMBA remains confident that shared-use trails can succeed in national parks, as they do in countless public land settings around the globe.

The alert also suggests that this regulatory change could affect how Wilderness, or areas proposed for Wilderness, will be managed. In fact, these issues are completely separate. IMBA recognizes that cycling is not allowed in areas designated as Wilderness. The NPS proposed rule change would have no impact on Wilderness regulations.

IMBA encourages mountain bike organizations to reach out to their local hiking trail partners and NPS local leaders with our fact sheet on the issue, to address concerns and answer questions about the rule change.

Creating opportunities for mountain biking will not diminish experiences for existing users such as hikers or equestrians. Park staff are skilled at selecting appropriate trails for shared-use experiences. Hikers and bikers can work together to repair eroded trails, get kids exercising in parks and build excitement about our national parks.

More on What the Rule Change Will Achieve

The current “special regulations” process for opening NPS trail to bicycling is onerous and cumbersome, often typically taking years to complete. Only two of the roughly 24 parks that currently allow singletrack mountain biking have managed to complete special regulations, highlighting the unrealistic and unnecessary burden it places on NPS staff. The special regulations process required for bicycles also applies to snowmobiles, jet skis, airplanes, commercial trucking and other similarly intensive park uses. IMBA believes local park management, using the inclusive NEPA process, can best make decisions regarding bicycle use on the trails that they oversee.

In one real-world example, Tennessee’s Big South Fork National River and Recreation Area, trail users and park staff worked for many years to open two existing routes to bicycling, detailing the process publicly in environmental reviews, park planning documents and rigorous scientific research. Regardless, the trail opening was prohibited because special regulations had not been completed. While bicyclists, NPS staff, hikers and equestrians all support opening these trails to bicycles, the opening date is likely several years in the future, at best.

Another example can be found in Washington, DC, at Fort Dupont National Park. IMBA affiliated club Trips for Kids has been bringing inner-city youth to the park to ride the existing network of singletrack trails for many years. This program helps build self-esteem, get kids exercising and exposes an often underserved population to the benefits of bicycling and national parks. Technically, these trails are out of compliance with this bureaucratic, special regulations process – although all groups involved would call this program wildly successful.