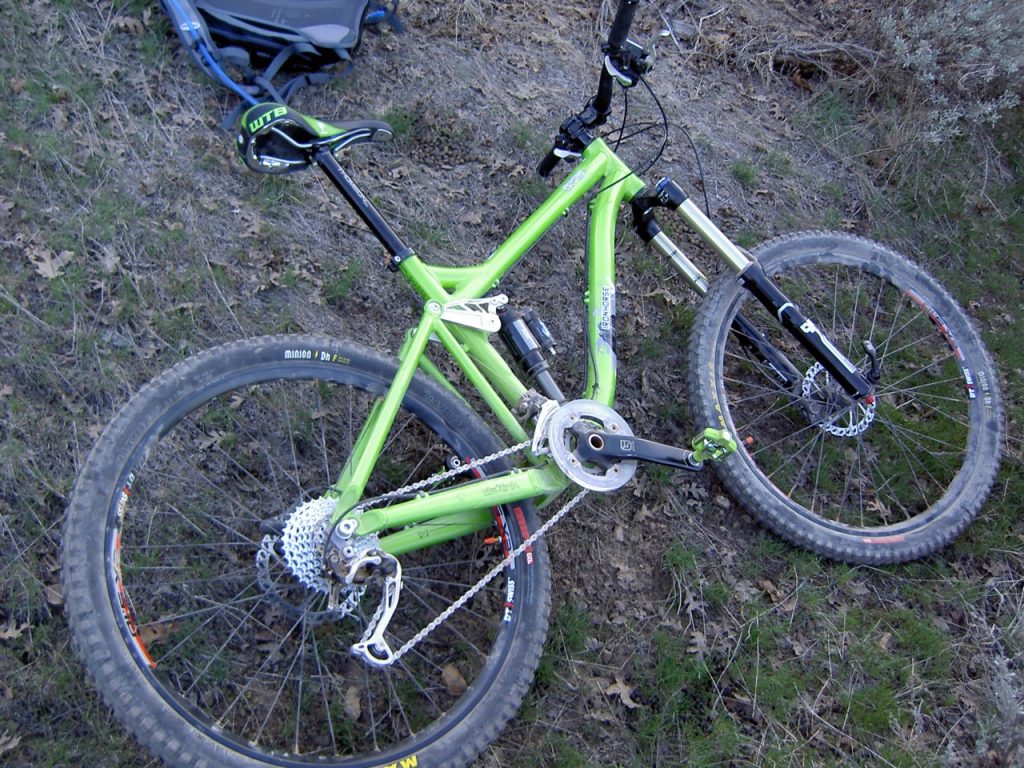 Iron Horse has really stepped it up over the past few seasons. Most of that success can be attributed to their adoption of the DW-Link suspension design for their top-of-the-line rides. And another part of that success is due to Iron Horse rider and current World Cup Downhill champion, Sam Hill. That guy blazes down DH courses on his Iron Horse Sunday faster than anyone on the planet.

His reign on the World Cup circuit has definitely attributed to the increase in sales of the Iron Horse Sunday downhill bike. Local DH bike shop, Go-Ride.com has seen their Sunday framesets fly off the shelves in recent years.

Even with the success of both Sam Hill and the Iron Horse Sunday, it doesn’t necessarily mean that the bike at hand, an Iron Horse 6Point6, is going to win a World Cup downhill. However, I was pretty confident that the 6Point would descend with the best of them… it was up to me to decide how well it would ride downhill while still being able to get back uphill. 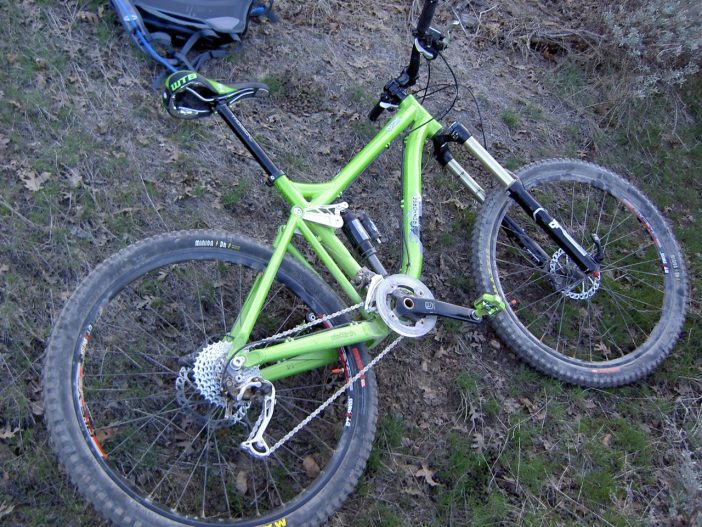 The Iron Horse 6Point6 is intended to be an aggressive all-mountain rig for those who can appreciate both the up and the down. Built around the famed DW-Link suspension, it yields 6.3-inches of travel via the Fox DHX Air 5.0 shock. This suspension design has received many accolades and is patented by Dave Weagle. Dave has worked with Iron Horse and a few other mountain bike manufacturers (most recently Pivot Cycles) to design their own particular flavors of the design.

The parts spec on the 6Point6 is top-notch with not a single slouchy part onboard. The mixture of Shimano XT drivetrain, RockShox Lyrik fork, DT Swiss Wheelset, FSA Gravity cranks and a Thompson stem and seatpost rounds out the stated 36 lb. package (mine weighed 32 lbs.).

With such a stellar parts spec, I would expect nothing less than excellent performance on the trail. I must point out that the exact bike I tested was the 6PointOD which has nearly the identical parts spec as the 6Point6 with a few exceptions: instead of a Lyrik Solo Air, mine had a Lyrik 2-step and the hoops were DT Swiss EX 5.10 in place of the E 540’s found on the standard 6Point6. 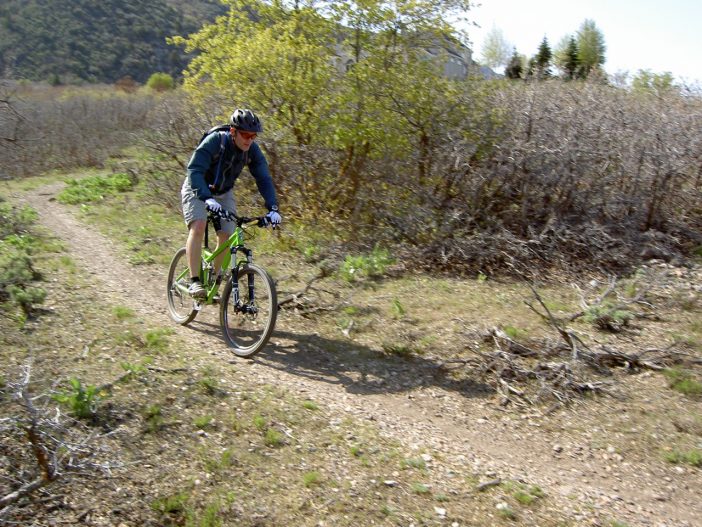 I had seen the bright green 6Point’s flying around Bootleg Canyon at Interbike last October, but never got a chance to get on one. Thanks to the great crew at Iron Horse HQ, I’ve been able to test the 6Point here on my local trails in Utah. The winter has been relentless (which has been great for backcountry skiing), but the local trails are just now beginning to thaw. After a few weeks of riding the 6Point, I’m stoked on its performance and here’s why.

I ordered the 17 over the 19-inch because I typically like my bikes to be quick and nimble (I typically ride an 18-inch frame). The only time I noticed it being a bit small was on a few tight switchbacks where my knees came close to the bars, but that could also be due to the shorter stem found on the 6PointOD. Other than that, the bike feels solid out of the box with a stout parts spec. Honestly, I was surprised to see the 36 lbs. listed weight because this bike felt noticeably lighter than the Norco Fluid LT3 that I’ve also got in the garage. A quick bathroom scale test says that the 6Point weighs 32 lbs–pretty good weight all things considered and much lighter than the stated weight.

Hitting the trail, the 6Point shows why the DW-Link is so amazing. With both pedaling and braking forces isolated, the pivot is fluid and smooth. On the flats, a natural pedaling platform keeps the rear end planted and efficient. Even standing sprints don’t overly compress the suspension.

Climbing, the 6Point feels natural and confident. The rear tire hooks up in all conditions and always feels ready for the unexpected steep, technical climb. It feels efficient on long climbs and I honestly didn’t notice I was pedaling such a squishy bike because it felt so responsive. As tested, the RockShox Lyrik 2-step allowed me to reduce the travel and increase the uphill capability. Without the travel reduced, it still climbed well, but did wander just a tad. 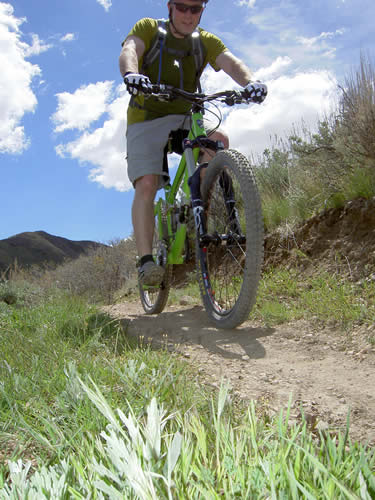 Descending nearly goes without saying. The 6Point6 is in its element when the trails start to go down. It is nimble, quick-turning and absolutely confidence-inspiring on the down. I felt myself laying into the corners and pushing harder than I have on many bikes. And, unlike some VPP-type designs, the Iron Horse 6Point remained flickable and easy to hop–positive traits of the DW-Link. Small obstacles and drop offs felt natural as I was able to get some decent pop off the lips. I felt like a rockstar on twisty, turny singletrack.

The drivetrain performance has been flawless. As a long-time Shimano detractor, I’m now a believer. The Shimano XT triggers now allow me to both up and downshift with my thumb (just like SRAM triggers), so my digits can focus 100% of the time on braking. Everything else on the bike felt solid with the DT Swiss wheelset providing enough burl to handle whatever I could throw at them. A nifty 150mm thru-axle rear hub contributes to the lateral stiffness of the wheels.

The seatclamp on my test bike wasn’t a quick-release, which made for a few buzz-killing moments when I had to stop and adjust, but it seems that the production model does have a quick-release. The only other drag is that the MSRP on this bike is pretty expensive at $3999. While Iron Horse is a solid brand, it doesn’t have quite the panache as Turner, Santa Cruz, Yeti or Ellsworth and at that price, that’s who you bump up against.

The Bottom Line on the Iron Horse 6Point6

Saying this bike is a solid descender nearly goes without saying. Where I was truly surprised is in the climbing ability of this rig. I stomped climbs as well as I’ve done on bikes with several inches less travel. I feel like my power is getting efficiently transferred to the wheels with every stroke. The build is solid and reliable with years of riding awaiting you. The bike’s performance has been stellar and has been my “go-to” bike when given the choice between several other all-mountain bikes in my garage.