While the ever-popular roof racks continue their dominance in the market, more and more innovative options are showing up in the hitch mount category. Kuat is well-known for offering high-quality hitch-mount bike racks that are sexy, functional and light. 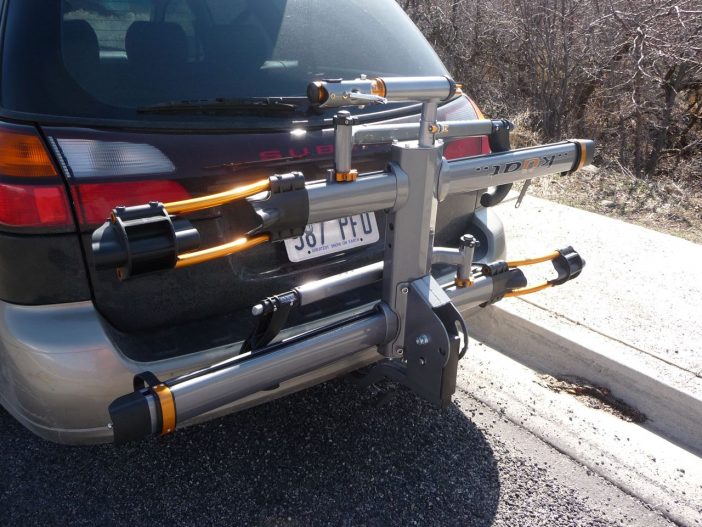 The NV is a little wider than some hitch racks, but is ultra-functional (The upside-down logo was my bad).

Like most hitch racks, the NV does require a bit of assembly to get it road-ready. Out of the box, the assembly steps are straightforward and can be completed in less than 30 minutes. To assemble, I slipped the rack onto my hitch and proceeded to piece the parts together. A sizable Allen wrench is included and that’s about all you’ll need. A separate adapter for wheels smaller than 24″ is included and must be attached to safely carry small bikes.

The overall fit and finish is impeccable. Many of the trailhead onlookers were first attracted to the anodized burnt orange bits that make the rack stand out. But, what wins people over is just how easy the rack is to use — securely attaching bikes is a breeze and tilting the rack up and down, then out of the way is likewise simple. 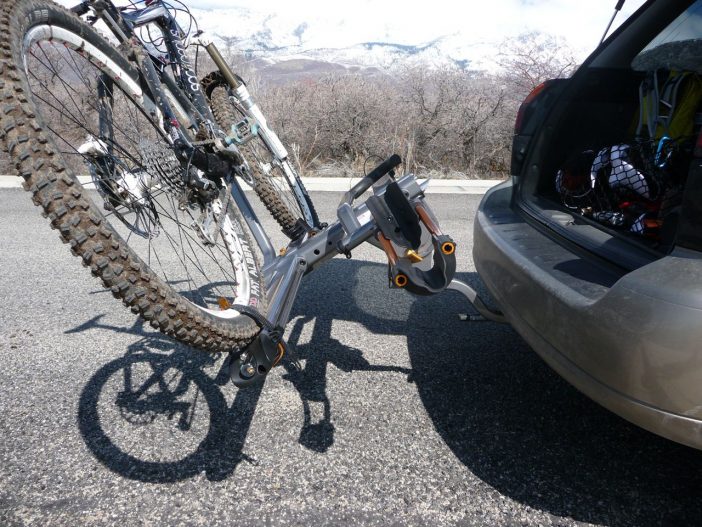 Tilt-away function is easy-to-use and gets bikes out of the way.

I really appreciated the tilting feature as it allows complete access to the rear of the vehicle (2001 Subaru Outback) even when two bikes are installed. Flipping the lever and letting the rack tilt back and repeating while lifting up was an easy process that was done hundreds of times throughout the course of the test. The mechanism has consistently performed and worked as expected. I love how the latch is spring-loaded so you don’t have to pull out and then re-insert a pin to achieve tilt-away nirvana… it does it automatically.

The stability wedge system provides for a wiggle-free attachment in the receiver. Many other racks suffer from wiggling rack syndrome, which can cause unnecessary bike movement while racked. There is still some minor sway in the rack itself, but the attachment at the hitch isn’t the culprit. 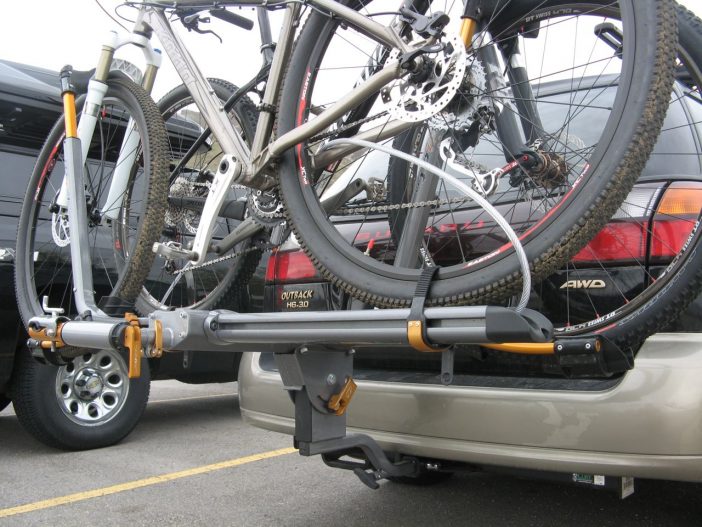 With the NV, you can safely haul road bikes, 29ers and freeride bikes alike in a stable and easy-to-use location. Not to mention, you’re getting the bikes off the roof where they can (in one easy act of forgetfulness) be crushed by the garage door, carport, parking garage or drive-thru restaurant. I loved being able to drive straight into the garage and shut the door — with bikes attached.

I have had some annoyances with the rack. The foremost was with the ratchet arms. Apparently, my test unit came with early-generation units that had problems releasing when needed. A quick email to Kuat and I had new lever arms that attached more securely and released with ease — problem solved. If you have these issues with your arms, contact Kuat for replacements.

The other issue that still lingers is with the retractable cable lock. Getting the lock cable to slide all the way back into the stowed position is no easy task. Lots of wiggling and finagling is involved and in the end, I’ve been OK leaving about 12″ extended that I can loop back into the tire strap (see below). I’ve been told a potential solution will be to file down the pin that holds the cable in place. Apparently this can cause snagging on occasion. When I get time, I’ll give that a whirl. 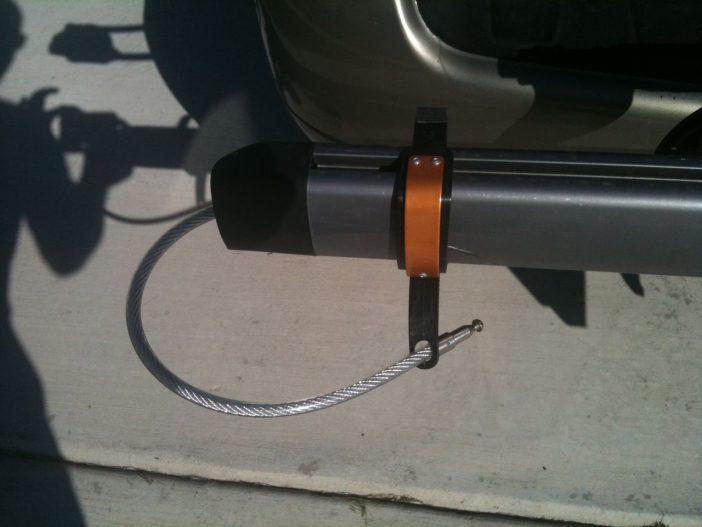 For some reason, this cable wouldn’t retract fully. I had to improvise.

With the NV’s built-in bike stand, it was easy to perform simple maintenance at the trailhead or in the garage. While it won’t replace your Park workstand, it is easy to operate and holds the bike securely. If you’re working on shifting performance in the bike stand, the inside pedal typically strikes the rack (when clamping on the seatpost), so I’d suggest a little longer arm on the stand to reduce this issue. 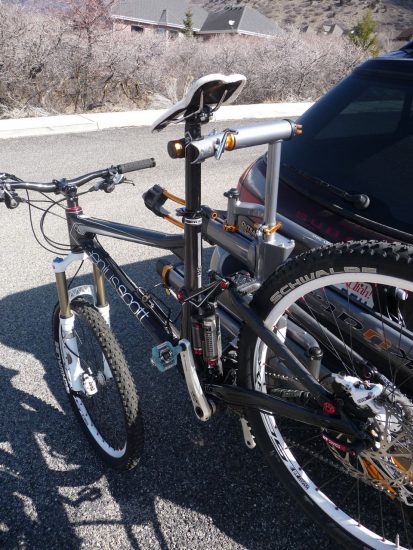 The built-in repair stand is awesome for trailside repairs.

Definitely one of the nicest-looking racks on the market, the Kuat NV bike rack is not all just good looks — it performs well and is super-easy to use. You can trust it with your burliest bikes and skinny’s alike.