The best early-season trails in Utah County can be found in Lambert Park in Alpine. The city maintains miles and miles of singletrack trails that meander through the 255 acre park. With so many different trail options to choose from, it’s rare that I’ll do the same trails in the same way every time.

March is about the time the trails are thawed enough and dry enough to have good riding conditions. I found that most of the trails were dry, while any of the new trails or re-aligned trails were a bit sloppy–it usually takes a season or two for the trails to drain properly. 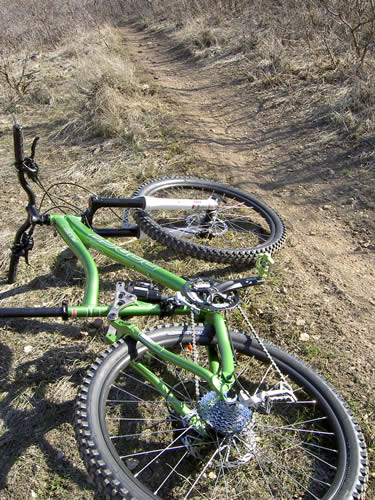 It was my first ride of the season and I was on an early-season test rig, the 2008 Norco Fluid LT 3 to work out some of the shifting and cockpit bugs before the season kicks into gear next month. I was also testing out some new shades from Ryders Eyewear.

It’s always good to take a couple of test rides on the local trails with new bikes and that was re-affirmed today as I ran into a few shifting bugs and some cockpit adjustments along the way. My initial thoughts on the Fluid LT are positive–the only thing I was wishing for was a fork with adjustable travel on the climbs. The Marzocchi Bomber 55R tracks well, but it sits up just a tad high on the climbs. 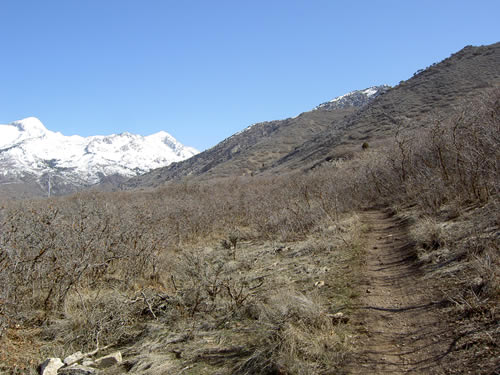 The one thing that irked me today was all the construction throughout the trail system. It appears that they are digging all kinds of trenches for pipes or maybe just for fun–right in the middle of the singletrack. My typical route (don’t know the trail name–too many to keep them straight) just ran right into a 10-foot deep and 20-foot wide trench that was about 100-feet long. I had to go around it and couldn’t make my way back to the singletrack, so I ended up pedaling up a new dirt road–kinda lame.

After meandering through neighborhoods, I hopped onto Indian (hard-to-find entrance off Rosanna Lane), then to Spring to head back to the car. Spring looks to have been recently re-aligned (possibly last Fall) around the parking area to the southwest of the Rodeo Grounds. That’s where I ran into a mucky mess. Once back into the established singletrack, it was once again dry and rideable–hitting the Lambert Luge and High Bench back to the car.

It’s great to have these trails in the backyard, but disappointing to have some of them torn up. Now that I know about those blockages, I’ll adjust my trail selection and stay on the dry, unblocked singletrack–there’s plenty to go around.