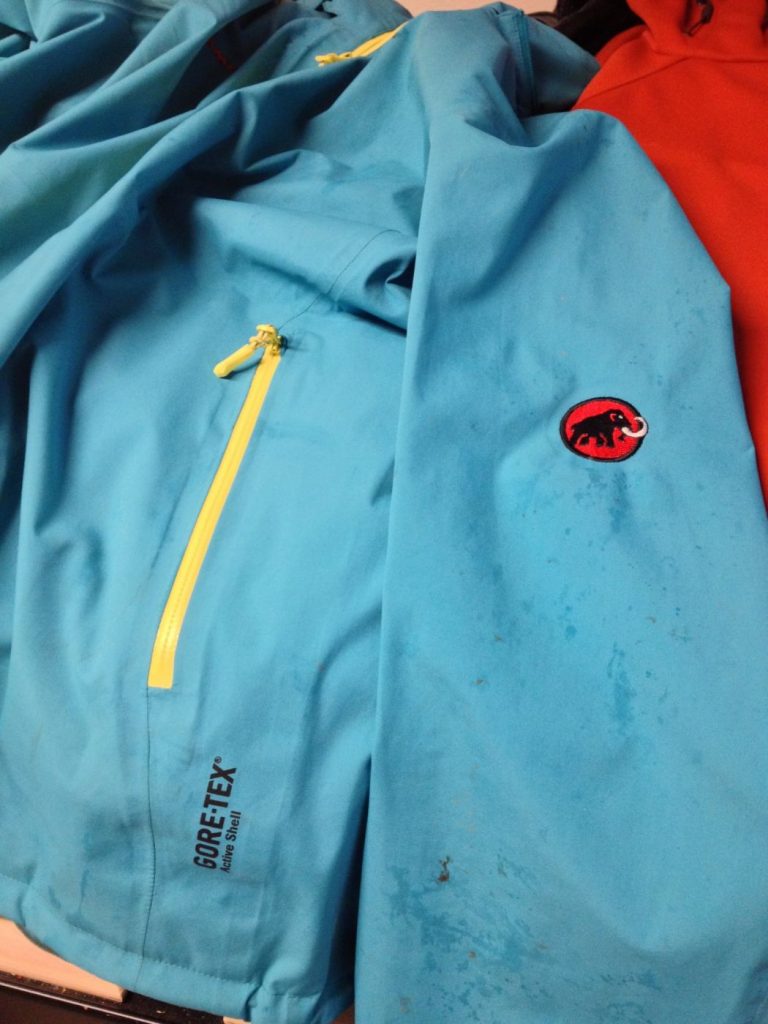 Active Shell is Gore’s lightest waterproof membrane and it has a way of turning good gear into great gear.  Mammut’s Shirko jacket is a nice jacket in a lot of ways, but Active Shell makes it absolutely shine. 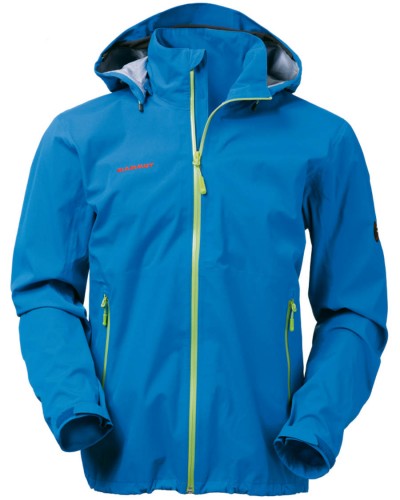 The Shirko weighs in at a feathery 11.5 oz on my test scale, which is a good indicator of what this jacket is meant for.  It’s an ultralight, highly packable shell that isn’t loaded with features like so many jackets nowadays are; the puny 4-square-inch chin guard testifies to this.  What the Shirko lacks in gadgets it makes up for in sheer performance: I agree with Jason that Active Shell is Gore’s very best fabric and the Shirko is a great application of this technology.  The minimalist cut of the Shirko works hand-in-hand with Active Shell’s phenomenal performance to create a sublime piece of outerwear for aerobic activities in wet weather.

It’s a bit of a toss-up whether Active Shell breathes or sheds water better – by all accounts, it excels at both.  The pores in Active Shell are 20,000x smaller than a droplet of water, and it’s not an overstatement to say that I never felt a drop of outside moisture while wearing the Shirko.  The water proofing just doesn’t mess around: to illustrate, I repeatedly filled my jacket from a spigot to put out our campfire, and when I put it back on the inside was still completely dry.  Yeah, it’s waterproof.

On the breathability front, the Shirko’s performance is just as impressive.  Gone is the mini-monsoon that I’ve generated inside of most other jackets; Active Shell eliminates the vast majority of water vapor while totally sealing out rain.  I’ve been biking around Spokane quite a bit this fall and a lot of it has been in rain — the Shirko shrugs off heavy rain while maintaining a reasonable climate inside of the jacket.  I only overcame the jacket’s abilities during one very exhausting ride in incredibly humid weather; for all ‘normal’ rainfall, though, Active Shell can hardly be beat. 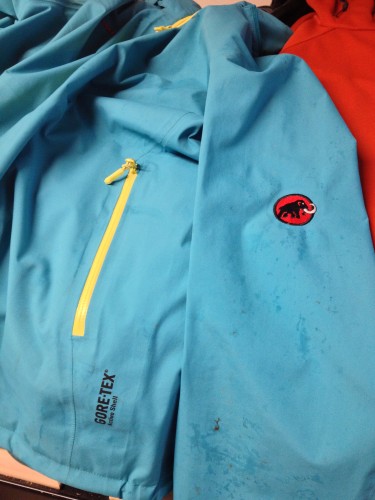 The jacket itself is rather nice, as befits a Swiss brand like Mammut.  The Shirko has a reasonably athletic cut but is oddly roomy in the sleeves, particularly on the upper arms.  The cut, combined with a moderately stretchy fabric, allows the jacket to move very well.  Mammut decided to make the pocket liners out of the same laminate as the rest of the jacket and I was a little concerned that precipitation would pool in there.  My fears were groundless – the seam at the bottom of the pocket is the only one on the jacket that’s not sealed, so rain or snow can drain to the outside of the jacket.

After nearly eight weeks of testing I’ve been impressed with the Shirko’s durability.  The fabric resists snagging and it’s held up to multiple washings in a fairly short period of time.  Water is still beading up well and I don’t expect to have to reapply the DWR anytime soon.  The only qualm I have with Active Shell’s performance is that the pores in the fabric tend to clog after a few uses in wet and muddy conditions; Active Shell can’t really be faulted here, though, since it’s only because the jacket is so breathable that clogged pores become an issue.

The Shirko’s sealed main zipper is the only bit of the jacket that isn’t top-notch.  It binds quite easily in both directions and this issue has been well-documented by other owners.  The removable hood is a great feature, and I thoroughly enjoyed removing it.  The hood can stow away into the collar and be secured by Velcro, but stowing it like that makes the collar pop more than a 50’s rock icon.

The bottom line on Active Shell is very simple: if you live somewhere that rains more than once a week, you’re missing out by not having Active Shell. It’s an expensive fabric, but its performance is absolutely top-notch and it makes activities (particularly mountain biking) loads more fun in the rain. I would highly recommend the Mammut Shirko simply because it’s a more affordable Active Shell jacket now that Mammut is no longer producing it. You can pick up a great Active Shell product from a Swiss company for around $200 – not chump change, but probably one of the better values on this can’t-miss fabric.