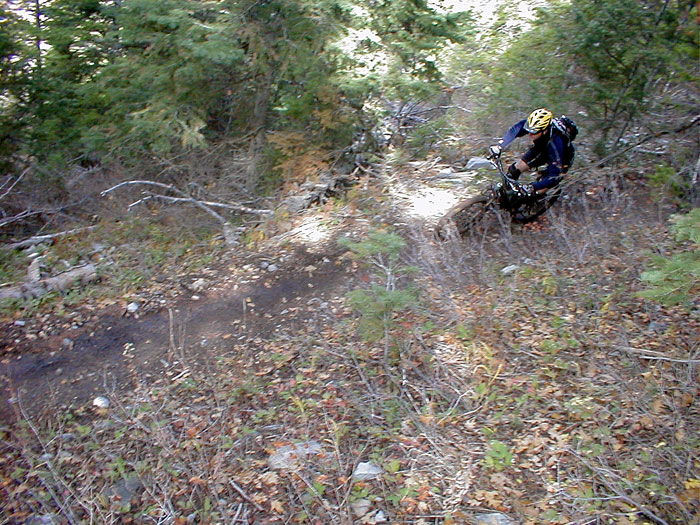 I’m downright bummed while writing this post. I feel like I’ve lost an old friend as I consider the quick demise of the once-stellar singletrack trails in American Fork Canyon that have now been destroyed by re-allowing motorcycles in the area. That decision has, in two short years,  done more damage to the area’s once-buttery trails than could ever be done in a lifetime of use by mountain bikers, hikers and equestrians combined.

I’ve seen battles rage between the moto and MTB crowds on UtahMountainBiking.com, I’ve seen tempers flare on the trails and, most of all I’ve seen first-hand the extreme damage that motorcycles have caused. I’d say it’s about time the IMBA, local trails groups (URMB and WAFTA) and the US Forest Service takes action and either changes the rules for motorcycles or does an about-face by banning them once more.

I realize that there are many motorcyclists who respect trail etiquette and/or who choose not to ride until the trails are completely dry, but the problem is that with such a powerful and heavy machine, all it takes is a single rider to turn a soft trail into “Jimbob’s Mudbog”. Add on top of that 3-4 friends and the trails get the 2-stroke beat-down in no time.

Once those deep ruts are placed in the trails, the trail no longer drains properly and water gathers in those ruts–thus exacerbating the problem. Just one rider who chooses to throttle his way through a muddy trail can and has caused extreme damage to much of the area’s best trails.

Not only are muddy areas increasing in size, but the ruts in now-dry trail sections are getting deeper and deeper, thus turning them into front-wheel grabbing danger zones. Many of these areas are now also unrideable because your pedals hit the sidewalls or your front wheel hooks up without warning and sends you over the bars in a jiffy.

On top of all this, many rocky sections are becoming filled with loose rocks that have been torn up by these motos. Those sections are very difficult to navigate on bike and make hiking in those areas dangerous–especially for older and younger hikers.

I realize that these trails are being ridden legally by motorcyclists, but it’s time we all do our part to ensure the trails in this area remain rideable and sustainable now and in the future. I propose one or more of the following solutions:

1) For starters just a single sign stating “Do Not Use Trails When Muddy” at every trailhead.
2) Place gates at all trailheads and close the trails to all users when deemed too wet for use.
2) Motorcycles be banned from the area until the trails are deemed dry enough to reduce damage by setting timelines for moto use (July – September?).
4) If the above options don’t work, motorcycles be banned completely or given access to the few trails that can sustain them

I recommend these options but also recognize that all user groups should refrain from riding the trails when muddy and walk bikes through short muddy sections. The closure gates that have been placed at the base of Clark’s and Ghost Falls Trails in Draper are great examples. Maybe some “Do Not Ride When Muddy” signs need to be placed at all trailheads in AF Canyon? It could be a simple interim solution.

I realize that motorcyclists feel they are entitled to ride the trails and feel like they contribute more in raw dollars to trail maintenance than other user groups.  They do have to pay licensing fees, which other user groups do not, but that’s no excuse or compensation for the damage that has been caused at the twist of their wrists. It’s time to make drastic changes to motorcycle access rules in American Fork Canyon or else these phenomenal trails will be permanently transformed into a 2-stroke wasteland.

Let me add to this a bit… Although my angst is directed squarely at the few moto riders who lack trail manners, there are people in every user group who are damaging the trails. Lets all be responsible in our use of trails and follow common courtesy by obeying the rules of the trails.

NOTE: Take a look at the trail damage on South Fork Deer Creek and decide for yourselves. This is just a sampling of the damage that’s prevalent not only on this trail but on many other trails in the area. Mud bogs have tripled in size, ruts have increased dramatically and loose rocks are much more prevalent than the pre-moto days. Pictures were taken the morning of June 6, 2009 and many of these trails have since been re-routed. It’s up to us to keep them from turning back into this again.