Many times, I’d driven through Grand Junction and Fruita, CO en route to Denver, but never stopped. I’ve always looked around and felt like there was something there that I needed to discover. I’ve felt some sort of pull to the area. Now that Fruita has well become the latest mountain biking Mecca, I decided I needed to find out what all the stink was about.

It all started in July when I found out that an old friend of mine was getting married at Powderhorn Ski Resort just outside of Grand Junction. The wheels in my head began to turn and I began to set my bearings for Fruita and Grand Junction–I wanted to ride and, oh yeah… I wanted to go to my friend’s wedding.

The week before I arrived, I called my friend, Jason, and said I was bringing my mountain bike to hit some trails in Fruita.

He said he could drum up some riding companions, then paused and said, “some guys go golfing the morning of their weddings, but in our family, we go for road rides.”

I said, “no problem, I’ll bring my road bike and I can do both a road and a mountain bike ride.”

After a comfortable night’s stay at the Balanced Rock Motel in Fruita, I loaded up the Subie and headed to where we were all to meet for the road ride–8:00 AM. I showed up and everyone was gone–apparently, they had changed the start time from 8:00 to 7:30. I boogied on up to the Monument entrance to catch up with them. I passed them in my car about 900 ft. into the climb out of the Grand Junction entrance, then stopped at Cold Shivers pullout.

We hooked up and were off to ride the rest of the loop to Fruita, then back to the Grand Junction entrance. What an amazing road ride! The views were absolutely stunning and not a single car on the entire loop.

I managed to still have a little over 1200 ft. of ascending to do over the course of the rest of the ride, but more importantly, I had over 2500 ft. of descending to do. Giddy up! The hairpin-filled descent to Fruita was filled with steep, fast turns and occasional tunnels.

I knew I liked the area already. This was by far the best road ride I’ve ever been on and that was just the start.

During the ride through the Colorado National Monument, I picked the other rider’s brains on the best mountain biking trails in the area. George and Eric (members of the mountain bike racing team for Mesa State College) were quick to suggest Horsethief Bench Loop after they saw my Turner RFX. They said I would love the technical rock drops and scenery. 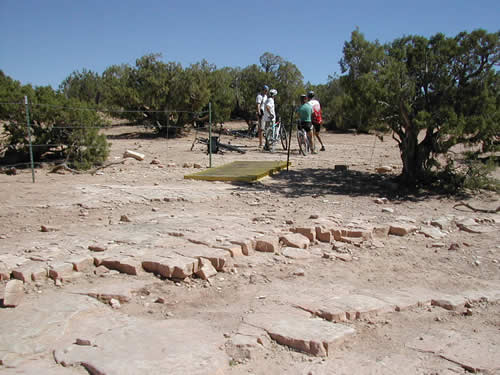 George and I met up with Cory and Hailey (I never got last names) at the Mary’s Loop and Horsethief trailheads. We quickly ascended up the dirt road, then dropped back into the mesa overlooking the Colorado River.

To reach Horsethief Bench, simply follow the signs to Mary’s Loop–Horsethief branches off about a mile into the initial climb up Mary’s Loop.

The descent into Horsethief is… well… sketchy! I followed George on his hardtail until he pulled out. I guess the 2-3 ft. drops were more than he could handle on his Gary Fisher. I continued another 50 ft., clearing rocks and drops galore. Then, the final challenge before making it to the bottom home free… a 6 ft. angled rock drop with a narrow entrance to a downramp on the right side of the trail. I decided not to go for the drop, but to hit the downramp (which happens to be a flat rock) when my front tire had other plans. I washed out and slammed into the rock. 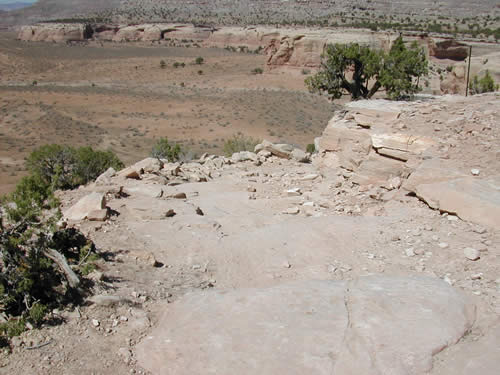 I decided not to attempt it again (I know, I’m a wuss), but opted to save it for another day, content with riding the farthest down of the group.

Once on the Bench, we took the loop trail clockwise. The trail winds up and down rocky sections with some 1-2 ft. step-ups and good rock drops thrown in every once in awhile just for fun. A couple of technical sections not too different from the entrance are thrown in just to keep everyone honest. On the loop back to the gnarly entrance, you ride up a dry creek bed made of sandstone. This was like riding on a bobsled trail. 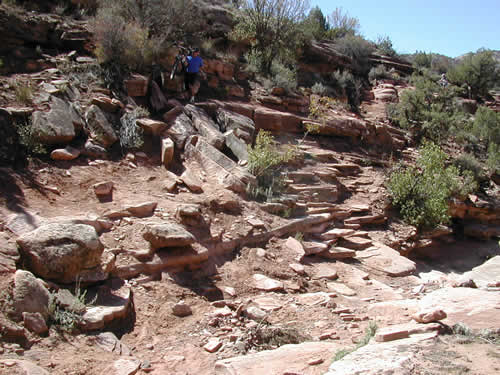 The loop is completed by a grueling hike-a-bike up the rock star entrance.

Basically, I barely touched the surface on the riding in Fruita and Grand Junction. There are plenty more trails that I didn’t even hear about.

For more information, I would suggest contacting Over the Edge Sports in Fruita, CO and hitting the trails. Fruita is a great place to spend a weekend of mountain biking. And at only 3.5 hours from Salt Lake City, it’s accessible to many riders.