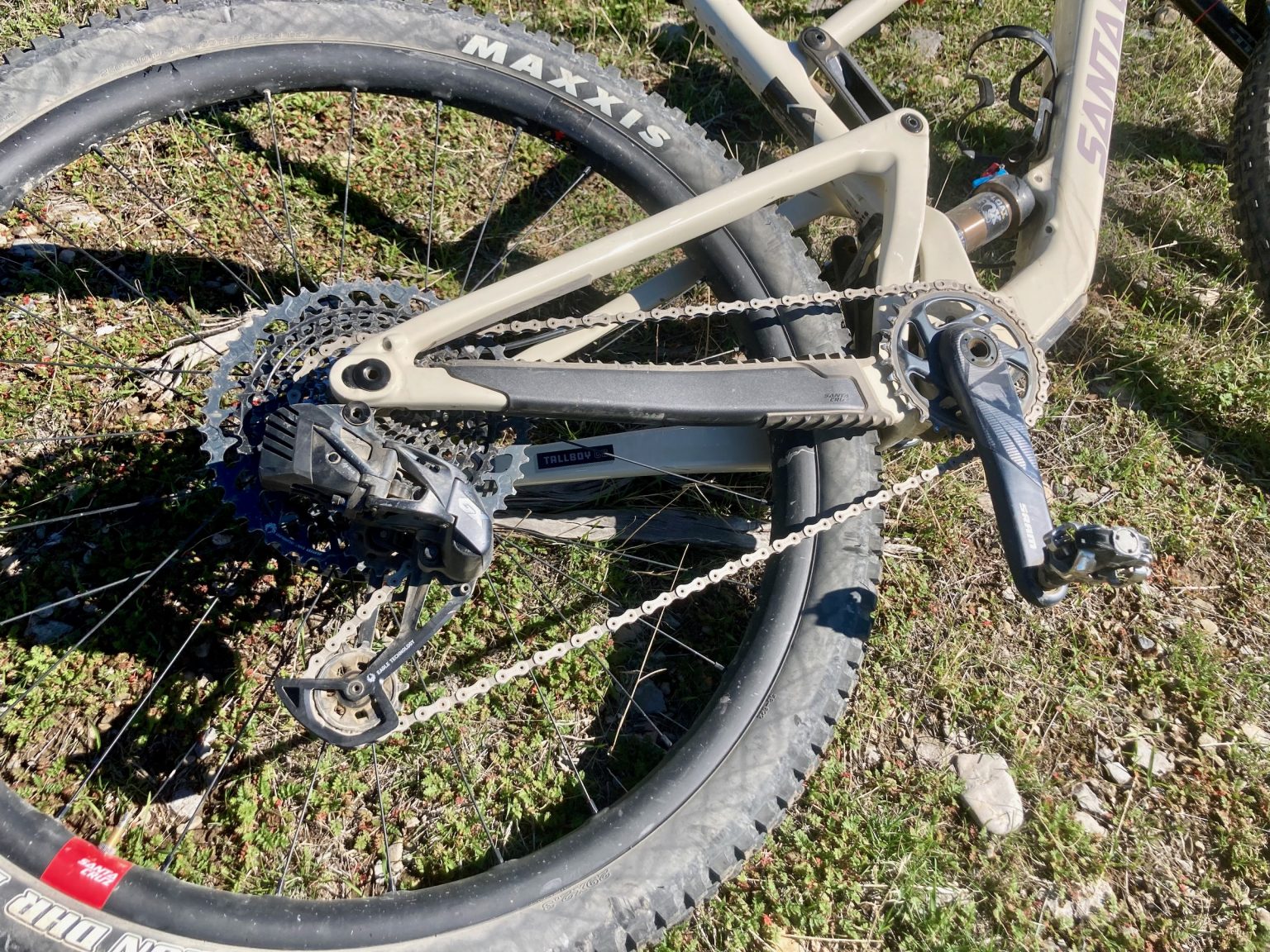 Electronic wireless shifting has reached new heights during the bicycle super boom. SRAM has somehow managed to expand their AXS lineup to both Rival and GX levels while also landing even more factory builds from just about every manufacturer on the planet. But… on the surface, electronic shifting on mountain bikes doesn’t quite have the same ring to it as it does on road and gravel bikes. I don’t know if it’s just personal preference or “roadie bias” but I haven’t even really considered electronic mountain bike shifting until the GX AXS level came to play.

With electronic shifting comes a whole new level of considerations. The idea that I now have to keep batteries charged or else my bike is bricked is sometimes a hard pill to swallow. Pulling the bike from the wall and realizing that the battery is low is a buzzkill — unless you have a spare at the ready at all times (a must). In this review, I will cover the installation, function and usability of SRAM GX AXS.

Installation and hedging my bet

The 2021 Santa Cruz Tallboy CC X01 came equipped with SRAM’s bulletproof mechanical X01 Eagle drivetrain. With that foundation, to go wireless, I could easily swap out the rear derailleur and shifter for a painless AXS upgrade. And… SRAM has just the thing with their $600 GX Eagle AXS Upgrade Kit, which includes all you need to get into the AXS game from any current Eagle groupset.

Before starting, I measured the chain to be sure it still had plenty of life (it does), I then removed the chain and began the process. While the GX Eagle AXS Upgrade Kit should be a cinch to install and configure, I didn’t want to be left high-and-dry during hero dirt season should my midrange wrenching skills prove lacking. So, hedged my bet a little by keeping the current groupset in place until I could confirm everything. To do that, I simply taped the derailleur out of the way and proceeded to AXS.

Once the X01 derailleur was out of the way and taped to the chainstay, I was clear to wrap up the install. Next, I locked the cage on the new derailleur and re-attached the newly-cleaned chain.

The next step was pretty straightforward using the included B-gap adjustment tool. Simply place it on the largest cog, with the chain in the second cog, then adjust the gap screw until the tip of the pointer is directly over the upper pulley bolt. Pretty much drop-dead simple if you ask me. Check out SRAM’s video.

The next step was to pair and test the GX Eagle AXS controller. With the mechanical derailleur safety taped out of the way, it was easy to configure. Here are the pairing steps:

Initially, I thought the shifter placement would be as easy as the existing X01 mechanical shifter. But, as it turns out, that couldn’t be farther from reality. My first ride had the shifter mounted just as I have many shifters before — using the MatchMaker X and mounting the shifter on the outer bolt. After that first ride, however, my wrist and thumb hurt and overall handling suffered because I couldn’t properly wrap my hand around the grip. Instead, my thumb had to rest on the shift paddle the whole ride instead of wrapped around my Ergon GE1’s (see above: my thumb got tired of having to be in this position). To use the MatchMaker X, I would need to place my brake levers further inward than I prefer.

Back home again, I removed the MatchMaker and went with the traditional mount. I’m not exaggerating that it subsequently took at least 5-10 rides before I found just the right placement. And now, I think it’s about as good as I can get it. My advice: have patience and keep tweaking, but at the end of the day, it’s a completely different shifting experience than your thumb is used to, so you’ll need to adapt a little.

All I was after with my endless placement tweaks was to allow my thumb to wrap around my grips uninhibited by the shifter, but still be able to reach it easily. Comparing where I started to where I have settled, it’s pretty obvious that you can toss your existing placement preferences out the window with GX AXS. The cool thing is, during this process, I’ve discovered a nice little shifting hack in the process (more on that later).

No question… electronic shifting is a blissful experience. Be it Shimano’s Di2 or SRAM’s AXS — it’s all so fast, smooth and responsive. But, my testing so far has been exclusively on road and gravel bikes (SRAM Red AXS, Force AXS and Rival AXS). It goes without saying that mountain bikes are different. The terrain is different. Movements are different and the demands on your drivetrain are all different. Terrain changes are much more extreme and shifting has to be blatantly felt.

With all that in mind, using GX Eagle AXS was unsettling at first. Where was the tactile shifter feedback I have become accustomed to? Gone was the positive click and engagement in favor of a tap and brrrrt. It’s hard to put down in words, but surprisingly this initially-mixed experience is coming from someone who LOVES electronic shifting. It’s all head-scratching, I know. But, I soldiered on both in search of the proper shifter placement and harmony with electronic shifting on a mountain bike.

As far as actual shifting goes, GX Eagle AXS is wicked-fast and smooth. Tap, shift. Tap, shift. Tap, shift. I mean, it’s electronic shifting, so you knew that already, but it remains delightful no matter the gear or terrain. Speaking of that, when the pitch steepens in a hurry and you find yourself overgeared, it’s always nice to simply smash that huge electronic paddle for instant relief. The shape and placement of the GX Eagle AXS Controller is dialed into frantic downshifts. I can be pretty sloppy and in my mashing, the default inclination is a downshift (which is what you want).

Further, you can set up Multishift on the SRAM AXS mobile app. Holding the buttons down to dump gears is nice to have for mountain biking, but not nearly as essential as it is on the road/gravel. Still, I found it useful enough to configure and keep it in that mode.

A shifting hack I stumbled upon is the ability to shift with the backside of your thumb. Using the front-facing trigger button with my trigger finger is now completely dead to me (even though that’s all we used back in the day). Why is it dead to me? Well, fingers are for braking and thumbs are for shifting, dummy. With that, I’ve found that I can hit that trigger button with the backside of my thumb. I think it helps that my thumbs are double-jointed, but with that, I can maintain hand position and slightly pull my thumb backwards to tap the trigger and shift to a higher gear. This is particularly helpful on descents where I’d prefer to keep my hands in place and not reach backwards to upshift. Now, if that trigger button was more soft and rubbery, that would be even better.

With the derailleur, you get a battery cover to add extra protection. While the derailleur is built extra durable, this added cover adds even more confidence. It is a little challenging to remove, but that’s a good thing since you don’t want it falling off erroneously.

The inevitable shifting tweaks are awesome with GX AXS. Instead of thinking through which direction to twist the barrel adjusters at either end, you enter adjustment mode and tap the shifter up or down. I’ve been able to reliably fine-tune shifting while in the saddle without accidentally twisting things the wrong way.

And, unless you have extra coin to get the RockShox Reverb AXS dropper, you’ll have to deal with a mechanical dropper lever and electronic shifting. It does introduce a little bit of a mismatched feel, but I got used to it. And, at some point, eliminating yet another cable from the cockpit seems pretty nice.

For $600, the SRAM GX Eagle AXS Upgrade Kit provides a ton of value. Admittedly, I’m more of an electronic shifting fan on the road or gravel, but it absolutely works here. A little more tactile feedback would be nice, but the speed with which it shifts is astounding — even under load. Ergonomics is still taking time to adjust to, but I’m at the point where after four months, it’s becoming more and more comfortable.

If you want to get into the full SRAM AXS ecosystem on a budget, there’s no way around just how fast and smooth this system shifts.