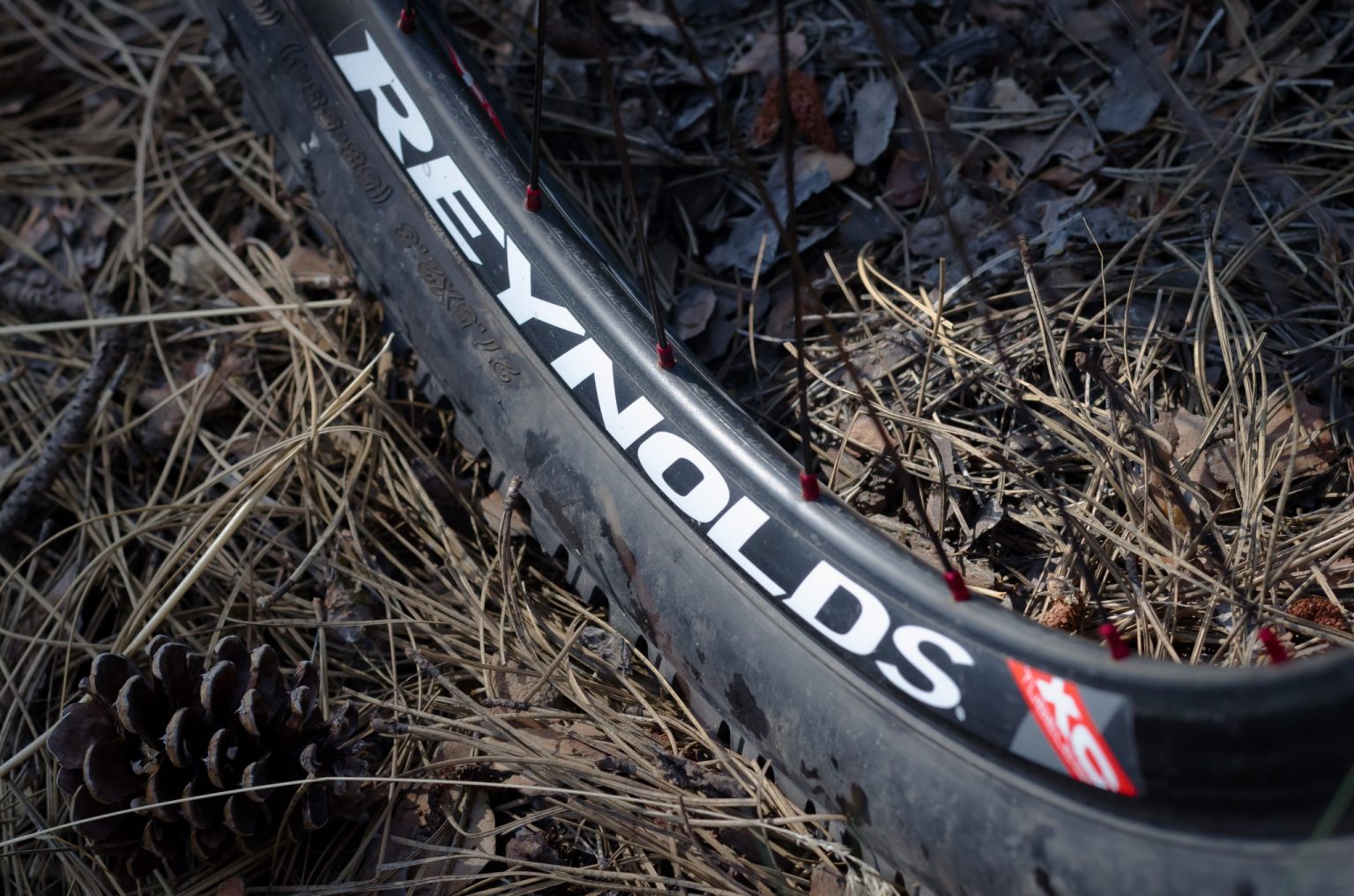 Reynolds popped up in the foothills of the Wasatch Mountains in the early 1990’s. They’ve long been known as one of the brands at the cutting edge of carbon development, starting with the release of their Ouzo fork and continuing from there. Reynolds calls themselves ‘scientific’ in their approach to building bicycle wheels, and since I am a biologist by training I was intrigued by that statement. To me, it suggests a program of rigorous testing and experimentation, backed by a bulletproof rationale grounded in dynamic and material physics. Needless to say, this set up some very high expectations for the Reynolds 27.5 XC carbon wheels that I’ve been testing for the season. 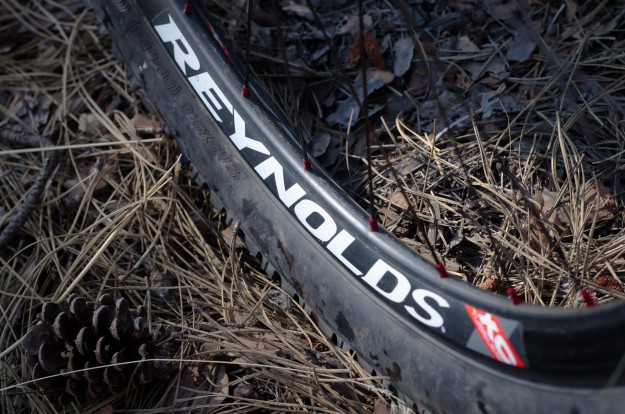 These are the three words that Reynolds use to describe their products. For the 27.5 XC Carbons, we must add one more: affordable. Although the wheelset’s $1900 price tag still manages to generate sticker shock, the wheels are actually one of Reynolds’ more affordable carbon offerings and, correspondingly, they stack up pretty well to competitor’s prices; many carbon wheels of comparable construction and intended use wind up in the high $2,000’s, and it should be noted that the wheels being reviewed here can often be found for hundreds of dollars off the MSRP. Nonetheless, anyone looking to upgrade to a carbon wheelset is doing so largely because they’re ready to drop serious money for serious performance, and that’s the lens that we’ll use for the rest of the review.

Out of the box, the wheels come ready to roll with a 9mm front and 125x9mm rear QR axle, with the necessary parts to convert to 15mm through-axle front and 142x12mm rear through-axle. My Santa Cruz 5010 runs the 15/12mm through-axle setup, so I got to play around with swapping out the parts. Reynolds has made it super easy, with simple push-on adapters that allow you to swap things around without tools.

The hub is laced with 28 straight-pull spokes, which wind up in flashy red allow nipples that take a standard nipple wrench. As I’ll discuss later in the review, I hardly had any need to true up the wheels during the test period, but it’s nice to have the simplicity of standard nipples. Reynolds is using a six pawl ratchet system, which is a good fit for a wide variety of terrain and offer quick catching in jerky technical sections of trail.

Perhaps the most significant factor that makes Reynolds wheels special is their careful selection of carbon layups for different parts of the rim. They vary the epoxy, resin and fiber of five different sections of the rim to make the most of carbon’s magnificent properties: tensile strength, stiffness and elongation. Reynolds calls this their MR5 (Mountain Rim 5 technology) because they use five different carbon blends. Specifically, the side wall, rim hook bead, nipple bed, tire channel and the spoke face are all treated independently.

The carbon rim is 29mm wide externally and 21mm wide internally, dimensions that help the wheel to excel in cross country applications. I ran Maxxis High Roller II tires (2.35″), a fairly wide tire for a cross country rim, and was very impressed with how the wheels took the tire. Tubeless setup is, incidentally, a breeze with this combination – I’m no pro at seating tubeless wheels, but I got a perfect seal and true bead on my first attempt. Three months on, the wheels still hold pressure like a champ. For reference, I used Stan’s as my sealant. 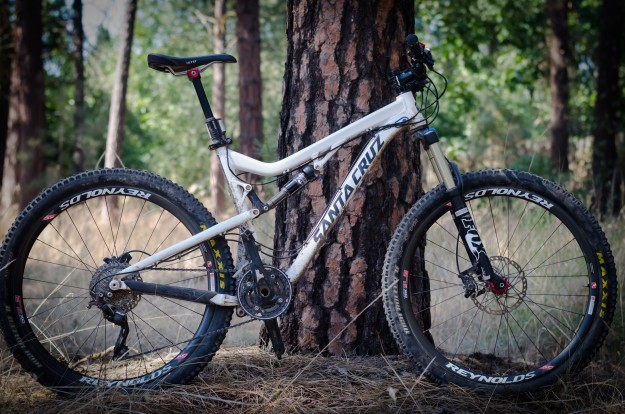 This is where things get a little bit more interesting. This wheelset is intended for cross country use, but I’m not a cross country rider — I’m in the all mountain/technical trail camp. I emailed my editor, Jason Mitchell, and asked him what he thought I should do, since these wheels aren’t really built for the jumping, dropping and root/rock busting that I was about to throw at them. His answer: test them hard, you idiot. And that, ladies and gentleman, is what I’ve done.

One of the fun things about having a good three months with these wheels is that I’ve put good miles onto them in three states: Washington, Montana and Nevada. Each place offers wildly different terrain: Washington is the site of my home park, Beacon Hill, which sports tons of rock and wooden features that test my ability in the air; Montana was the site of miles and miles of world-class technical singletrack, including the epic Bangtail Divide which, though not technical, pushed the XC Carbon wheels for all of its 31 miles; finally, Nevada is the site of demanding hiking trails that were never intended for bicycles, and leave you gasping for breath as you climb between 6,000 and 10,000 feet. What’s more, I started with the wheels in the springtime and am completing the test period in the last bit of summer, so the wheels have gone from spring slop to rutted late-season switchbacks. In short, the wheels have seen everything that they were ever intended to see, and quite a bit more besides that.

Since I have had so much variety under the wheels, I’ve had a chance to see all of the places that the XC wheels shine. There really aren’t any significant disadvantages to carbon wheels other than durability (discussed below), so this section necessarily has to be a discussion of to what degree the carbon wheels imparted their benefits to my ride.

The XC Carbon wheels offered a noticeable improvement over the stock alloy rims on my Santa Cruz, noticeable first in how easily they roll. Lightening up the wheels of a bicycle helps more than just about any other improvement, and I experienced huge gains with the XC Carbons. They spin up much more easily than the old alloy rims, helping me at the starts of climbs or to regain momentum after being tossed off course by an obstacle.

The light weight also manifests itself in noticeably decreased fatigue over long rides. My longest ride with these wheels was the 31 mile Bangtail Divide. The day was hot and the ride was long and dry, and frankly the exertion-saving traits of the XC Carbons were a crucial part in helping me to complete the ride without becoming unsafely exhausted. My 5010 is no fairy and it’s definitely no cross country bike, but these wheels helped me to blur the boundaries of what my bike can reasonably conquer.

Everyone knows that carbon components generally offer far superior ride dampening compared to their alloy counterparts, and that was wildly apparent with the XC Carbon. If you cast your thoughts back to around 2013, you’ll recall that Fox began kitting out thousands of bikes with redesigned Evolution forks. Two years on, I am hard pressed to find a shop mechanic who speaks highly of those forks – they’re harsh, unrefined clunkers. Or at least that’s my humble opinion. In any case, my 5010 sports a Fox 32 Evolution with 130mm of travel that feels like it has taken years off of my arms and elbows.

This is where these wheels come in — pairing this excellent wheel with a mediocre fork clearly demonstrated the significant gains in ride quality offered by a carbon wheelset. I experienced significantly less discomfort (particularly in my elbows) riding long, bumpy sections of trail with the Reynolds wheels versus my old kit, and that’s in large part because the wheels are compensating for the fork’s poor compliance. I knew that the ride quality would improve, of course, but the degree to which is improved is really a testament to Reynolds’ expertise and their MR5 technology.

The wheels are pleasantly stiff, too. I found that my steering accuracy was greatly improved over the stock rims. This was especially noticeable in technical bits where rocks would have deflected my stock rims much more badly. The XC Carbon, in contrast, plowed through all sorts of trying terrain with aplomb. 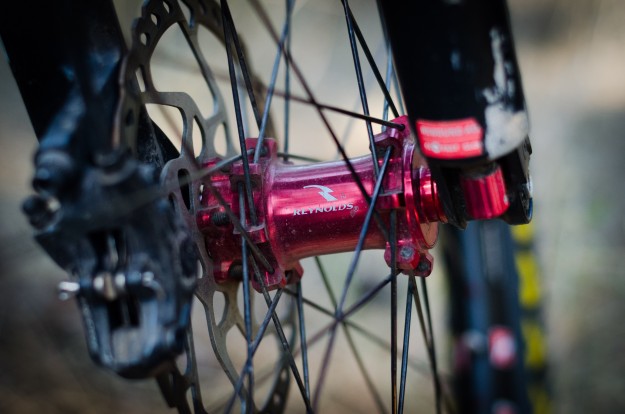 By all accounts, this should be the most remarkable section of the review. As I mentioned, these are cross country wheels that I rode in the neighborhood of all mountain/technical trail. These wheels have seen the worst of Bozeman’s trail system, including the tail-busting rocks of Sypes Canyon and the white-knuckle, heavily rooted descent from Mt. Blackmore. Further, they’re experienced all of the air, whether from straight drops to sweet jumps, that the downhill courses at Beacon Hill have to offer. Now, of course, none of this is really big-hit stuff, but they’ve had plenty of time with three or four feet of air beneath them.

What’s more, during a ride in Montana I encountered a dirt biker who yielded for me in a foolish spot. As I road underneath her, her foot slipped and her motorcycle fell on top me of and my bike. I was able to hop out just fine, but some of the weight of her bike ended up directly on the rear wheel. I checked it out and it looked alright on the trail, so I glowered at her and rode away.

Finally, the other somewhat questionable use that these wheels have seen is one that I wasn’t a fan of participating in, either: they’ve been wrecked three times, once quite hard and twice more gently.

After completing the test period, I took the wheels to a shop to be trued up. The results were pretty remarkable. The front wheel was still perfectly true, while the rear wheel was just slightly out of true. I imagine that the latter was due to the weight of the motorcycle, but the mechanic was able to easily true it up again.

When it comes down to it, these wheels simply perform and it’s difficult to make comments about price in light of that fact. Yes, upgrading wheels is always going to be expensive and there’s plenty of competition, but this is one wheelset that simply won’t disappoint. I was immensely impressed by the capability of these wheels outside of the cross country scene, but that suggests that they’re great for riders who gobble miles of XC but also like to feel the air under their tires. Reynolds has built a winner, and they’re taken care to include common-sense measures like easily convertible axles that make these wheels a real riders’ favorite.