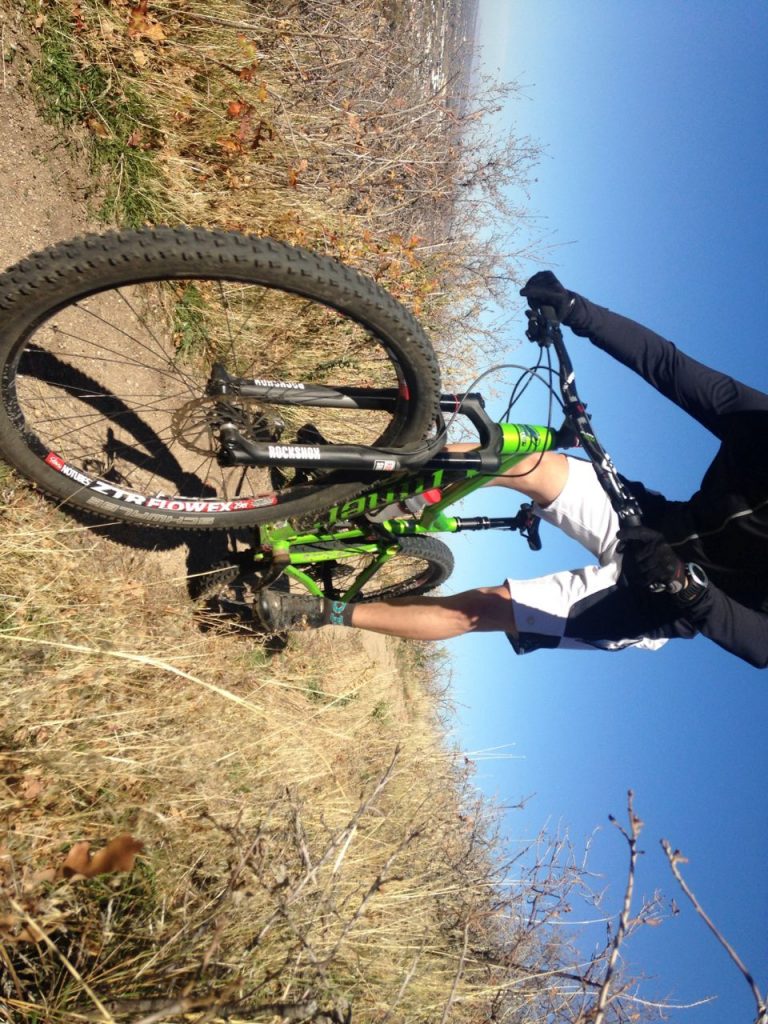 When SRAM re-introduced the RockShox PIKE for 2014, they didn’t just want to revive the old moniker — they wanted to drop-kick it to the curb and come out with something new and innovative. They wanted to re-establish the PIKE as the “go-to” all-mountain fork for all wheel sizes. While that success is still in the works, I’m convinced this is the best RockShox fork I’ve ridden to date. 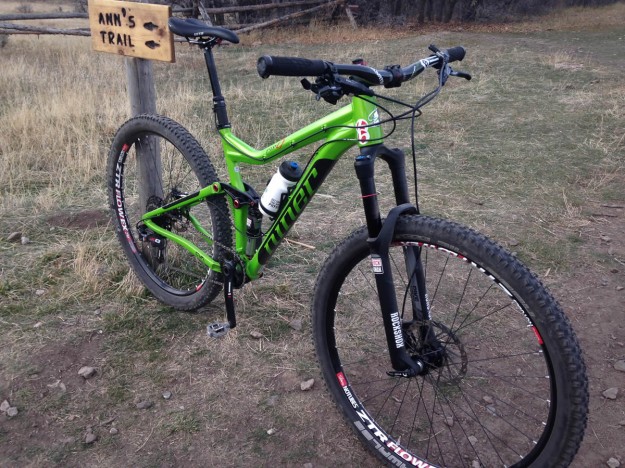 The PIKE is Back in Black

The all-new RockShox PIKE RCT3 is aimed squarely at the aggressive trail market. With offerings for a all wheel sizes and a range of travel options, the PIKE finds itself at home on bikes meant to do-it-all. My test sled has been the all-new Niner RIP 9 Al with its 125mm of trail-gobbling suspension. Niner recommends 120-140mm travel forks on their one-bike-quiver. Riding the PIKE 140 aboard the RIP was the perfect setup for all-day trail riding.

There’s lots to like about the new PIKE platform, but first off anyone who remembers the old PIKE just needs to forget it completely. Times have changed, technology has changed and this fork bears no resemblance to the PIKE of old. Since this is an entirely-new platform, RockShox put a stake in the ground and will only support the current standards for this type of fork: 15mm fromt axle and tapered steerer. They are, however still supporting all three popular wheel sizes (26, 27.5 and 29), so modern 26ers can still benefit from this new design.

The crux of the new PIKE is the all-new Charger Damper. This design utilizes oil to flow through the chambers as the forks are compressed. And, since, unlike air, oil can’t be compressed, a rubber bladder surrounds the damper to carefully allow for expansion throughout the stroke. This expanding bladder works much in the same way as a piggyback rear shock with controlled compression dampening that can maintain its smoothness on both small and large hits.

Initial fork travel tends to be the most supple part of the travel since all mechanisms are essentially at rest. RockShox designed the PIKE to take full advantage of that — thanks to the Charger. Small and large bumps are smoothed out with equal opportunity. 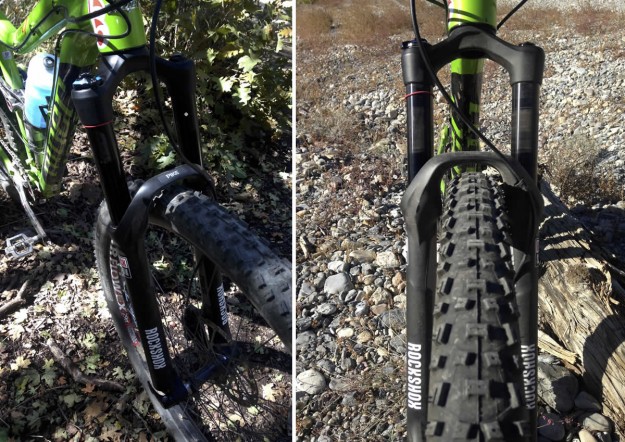 Setting up the fork required a new headset race (thanks, Niner!) and a quick trip to my LBS (Timpanogos Cyclery) for setting both the star nut and race. Once ready, I placed the fork on the scale and it came back at 4.25 lbs with race and star nut. Compared to the Fox TALAS I pulled off, that represented just over half a pound of weight savings, but I did lose the adjstable travel (which is fantastic on the RIP).

Now that RockShox has switched to Solo Air, the setup time is cut in half. Referencing the simple chart on the fork leg, initial spring rates can be set. After riding it at 70 psi for starters, I dropped ot to 65 psi and then down to 60 psi. While that’s a full 10-15 psi lower than is recommended, that’s where I felt it to be the smoothest and in my type of riding, I never once bottomed it out and when pushed hard I used the full travel.

For years, RockShox has battled a perception problem. Forks of the yesteryear lingered in the minds of riders and in spite of me telling them that the fork was actually really good, they still scoffed. Well, with the latest designs — and notably the PIKE — RockShox is back and riders are taking notice. Passing the RIP around to other riders, each one came away impressed by the performance of the PIKE. I’m no longer on an island anymore.

Mated to the RIP 9, the PIKE was right at home. With 125mm rear travel, the 140mm travel PIKE did rake things out just slightly. This made for a tiny degradation in climbing prowess, but put the RIP in a comfortable position once the trails pointed downward. As I climbed on the PIKE, I played around in both open and pedal modes (lock mode is unnecessary unless on the road). Between both modes, the only time I noticed a difference was during short standing sections where the fork would compress a little more in open mode than in climb mode. I just kept it in pedal mode for most ascents just for good measure.

In mixed terrain, I appreciated pedal mode as a good compromise between wide-open and efficient. Long descents, however, were best served in wide open mode as the fork effortlessly absorbed every bump (large and small) with controlled compression. I never felt like the fork bottomed out or “packed up” after rapid-fire compressions — it just felt smooth. The quality of travel on the PIKE is exactly what I expect a fork of this caliber to be. The Charger Damper delivers.

As mentioned, the lateral stiffness is solid with instant tracking under all types of conditions. Steering precision is immediate and the fork is unphased by rock gardens, drops and anything else I threw its way. 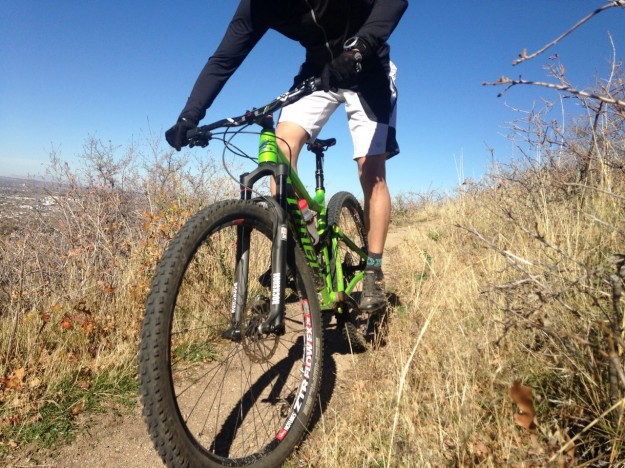 One thing that is better on Fox forks is the positive action on the CTD switch. As you’re flipping the lever, it easily engages in the correct mode with an almost-audible “click”. The PIKE doesn’t have quite that type of tactile and audible feedback when switching modes and sometimes I noticed that I hadn’t switched it completely. Additionally, I tried and tried, but I couldn’t really ever notice any difference in the low speed compression settings. Wide swings from one end to the other in both open and pedal modes yielded no discernable difference during low-speed chutter. I ended up keeping it in the middle and left it at that.

Independent validation of the PIKE’s performance confirms that I’m not alone in my praise of this fork’s performance. Everyone I’ve lent this bike to has commented on the quality of travel and overall smoothness of the PIKE.

Playing matchmaker with the PIKE, I’d say these frames are good candidates for the black beauty: Niner RIP 9 and RIP 9 RDO, Devinci Atlas Carbon, Ibis Ripley, Transition Covert 29, Intense Spider 29 Comp, Yeti SB95 and SB95 Carbon and the Santa Cruz Tallboy LT. Any one of those bikes would make the most out of what the PIKE brings to the table.

The 2014 RockShox PIKE is not only the best-looking, but is also the best-performing RockShox fork I’ve owned or tested to date with lights-out on-trail performance that matches and exceeds the performance of rivals. This is the fork that will win over any lingering detractors. The PIKE is back.