I still remember the very first Rocky Mountain bike I ever saw. It was the URT Pipeline at a local bike shop back in 1999. At that time, the purple-colored Pipeline was the lightest and burliest all-mountain/freeride bike on the market–I wanted one!

So, in 2000, I began my love affair with Rocky Mountain as I bought my first full-suspension bike–a Rocky Mountain Element Race. After getting my feet wet, I then upgraded to the first-generation Rocky Mountain Slayer in 2001. That bike got me hooked on more travel and was the beginning of my big bike movement in 2002-2004 before I began settling in on the current crop of lightweight all-mountain bikes that have since come on the scene.

Thankfully, technology has greatly improved since 2001 and we’re seeing a full spectrum of “all-mountain” bikes in the 5-6 inch travel range. I still prefer a bike that leans more towards squishy within that range and the new Rocky Mountain Slayer SXC 70 is just the ticket. With a 31-lb. weight, 160 mm travel and an outstanding suspension design to boot, the Slayer looks promising. After a few weeks of flogging, lets see how it fared. 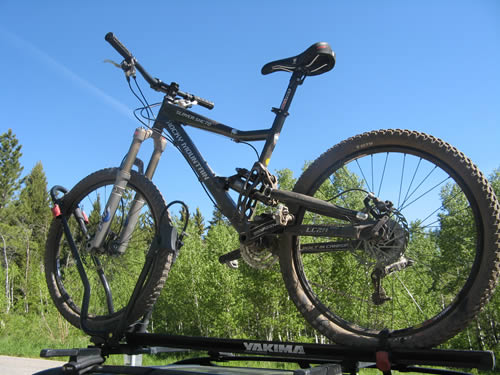 About the Rocky Mountain Slayer SXC70

Introduced in 2007, the Rocky Mountain Slayer SXC 70 is a capable all-mountain bike built Canadian-style. Being a huge fan of Canadian bikes, I’ve come to appreciate how Rocky Mountain, Norco and Banshee prefer to build their bikes. They don’t just lighten everything up for the sake of shaving weight. Weight savings are decidedly calculated by first ensuring that the bike will still be burly enough to handle the appropriate abuse.

Just throwing triple chainrings on a DH frame isn’t an option, but neither is slapping a long-travel fork on an XC machine. Canadian trailbikes simply ride smoother on the downhill than their domestic counterparts.

To do this, wheelsets are stouter, tires are wider, head angles are slacker, swingarms are overbuilt and forks typically err on the side of more travel.

That said, the new Slayer is built for everyday real-world trail riding. Not quite light enough to stay with the XC crowd, yet still capable of an all-day epic and inspiring when the trail points downward, the Slayer SXC 70 is everything a true all-mountain bike should be.

The build on the SXC 70 is solid. Headlined by a Fox TALAS 36 up front and Fox DHX Air 4.0 in the rear, the remaining parts are a mixture workhorse components like SRAM X.9 shifters and rear derailleur, RaceFace Deus XC cockpit, RaceFace Atlas cranks, Mavic XM 317 rims and Avid Juicy Seven brakes with 185mm rotors.

Noteworthy is the patented Low Center Counter Rotating (LC2R) rear suspension design utilized on the Slayer. Looking it over, the first thing that stands out is just how low everything sits on the frame. The center of gravity on the Slayer is well below anything else in the all-mountain field. Most bikes feature a high rocker arm with a top or downtube-mounted shock design. The LC2R design keeps everything low by utilizing a unique counter-rotating seatstay pivot. And as you go through the travel, the center-of-gravity continues to get lower and lower. To learn more, visit bikes.com.

Highlights of the Slayer SXC 70: 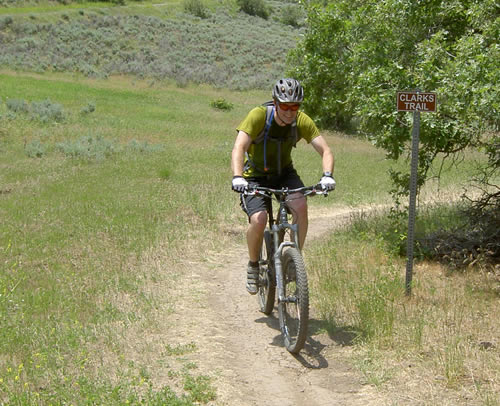 After a 6-year hiatus, I’m back on a Rocky Mountain–and loving every bit of it.  OK, before I start gushing over this bike, lets get down to some nitty gritty details.

Starting with its climbing ability, no, it’s not going to be the fastest one in the bunch, but if you’ve got good lungs, you won’t notice the extra pounds one bit (at 31 lbs., it’s still pretty darn light).  On rough or rocky climbs, I kept the Fox DHX Air 4.0 engaged and it stuck to the dirt like a magnet under all conditions. I felt I could pedal up anything and the bike would respond.

Typically, I don’t use lockout switches because I prefer the extra traction afforded by an active rear suspension.  However, I did make use of the ProPedal switch on a long, smooth singletrack climb on Clark’s Trail in Draper, Utah.  I switched it on and off during the climb to feel the difference and eventually settled into it being engaged on this particular climb.  All other climbs were easily tackled without the help of the ProPedal.

The LC2R rear suspension design is super stiff laterally. The beefy, asymmetrical swingarm is built burly in typical Rocky Mountain style. This is then mated to a carbon fiber one-piece seatstay for extra lateral stiffness.

Up front, a quick flip of the switch on the Fox TALAS 36 and I was in 130 mm travel mode, which was perfect for climbing.  Simple and effective, dropping 30mm in the front steepened things up for climbing. I never felt the need to drop further than that. Front-end wander was pretty much non-existent.  This thing tracks extremely well uphill.

My first descent on the Slayer was refreshing.  After riding several other bikes that have erred more on the XC side of all-mountain, the Slayer stands out as one leaning more towards the Super D or Freeride side of all-mountain.  The suspension design on this bike is amazing and the low center-of-gravity is immediately felt as you slice and dice through singletrack descents.

Without realizing I hadn’t even flipped the fork back to 160 mm mode, I was hooting and hollering all the way down some twisty turny rocky and rooted singletrack with the TALAS 36 in 130 mm mode–not knowing the wiser. On subsequent rides in 160 mm travel mode up front, the Slayer continued to push me to speeds and drops I hadn’t hit in years. Laying into the corners, the suspension just soaked everything up and felt increasingly stable–no matter how hard I pushed it.

You don’t get bounced around much on the Slayer when things get rough.  The Slayer can easily plow through just about anything you could ever throw its way. Confidence-inspiring is an understatement.  The Slayer simply crushes the downhill portion of the show. Not since my 2002 Turner RFX have I had a bike that has felt this capable both uphill and down. This bike is a hoot on the downhill–flickable and stable. 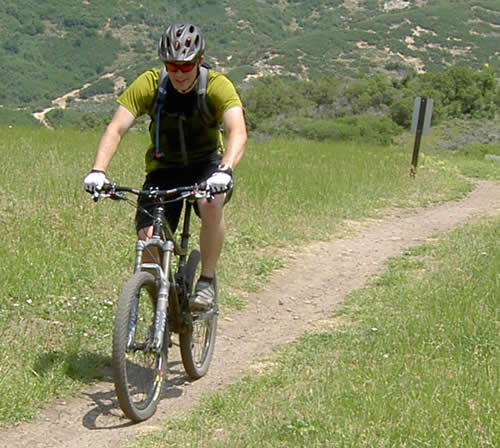 The Bottom Line on the Rocky Mountain Slayer SXC70

This is definitely one of the best trailbikes I’ve ridden to date.  It is built strong enough to sail through anything you can throw in its path. Smooth on the downhill is an understatement… this thing is one of the most capable descenders on the market. And, at 31 lbs., the Slayer maintains a respectable waistline that can power up any climb without wandering all over the place. This bike is a winner–the real deal if you’re looking for a trailbike that descends like a rocket and pedals uphill like a billygoat.

To buy a Rocky Mountain Bike in the Salt Lake City-area, check out Fishers Cyclery. For Park City folks, check out Cole Sport. Everyone else can just do a dealer search.