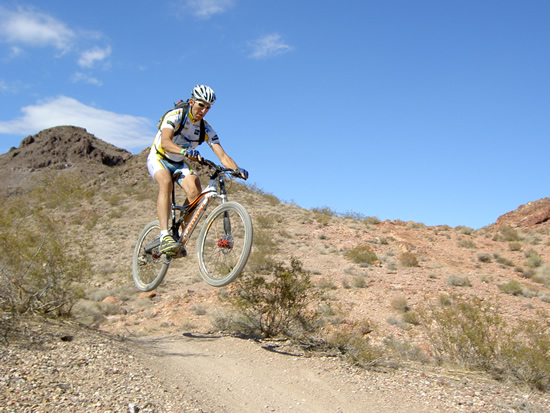 I’m a backcountry skier. Everyone that knows me could tell you that few things get me more stoked than skiing powder in the backcountry. Part of this passion is the reason we started this website back in 1999.

For a few years now we’ve had the tag-line “Getting sick since the 1900’s” on our business cards (yea, we’ve got ’em) and until FTH 3.0 we had it on the website. But when it came to the mountain bike side of the site, admittedly I’ve been MIA.

In 2000 I bought a Cannondale F700 Jekyl Lefty but it saw little to no action due to a trail running obsession. In 2003 it was listed on eBay and with a click, I said good-bye. Mountain biking had come (sort of) and gone for me.

During all these years Jason has been going to Interbike each September and has invited me multiple times to come to the demo to test mountain bikes. I finally took him up on the invitation and joined him today for the first day of the Interbike demo.

Reflecting on that tag-line I think the reality is that I have been sick in the head since the 1900’s. Halfway through our first lap on the first bike I tested I asked Jason, “What was I thinking all these years?!?”

In the hills above Boulder City, Nevada (just east of Las Vegas) you’ll find Bootleg Canyon, site of the Interbike demo since 2004. Full of trails both long and short with a handful of quick loops it’s a prime location. The trails are buffed out with technical sections of drops, rocky climbs, burmed corners and a nice sampling of stunts. The city has rolled out the red carpet and paved a couple of loops ideal for the demo booths.

Jason wondered if I could hang or if I would auger like any other rookie. Like my paper boy days, I rode like it was just another day in the hood, except for that one minor digger. I think my smile kept growing throughout the day with each trail and each lap. The cool people I met in the Specialized, Marin, Northwave, Intense, and Cannodale booths made me realize that the biking industry is a brotherhood, a collection of passionate people doing what they love. And the best thing was that they had rolled out the red carpet for me and hundreds more to test next years bikes, shoes, helmets and more.

Like a kid in a candy store it was hard to pick which brand and which flavor of bikes I would ride. But in the end I settled on the following bikes which I’ll soon be writing quick reviews of:

Take it from a rookie, I’ll not be making the mistake of missing another Interbike demo anytime soon. Aside from what tomorrow will bring, I’m already looking forward to next year. Stay tuned for the reviews and the photos.