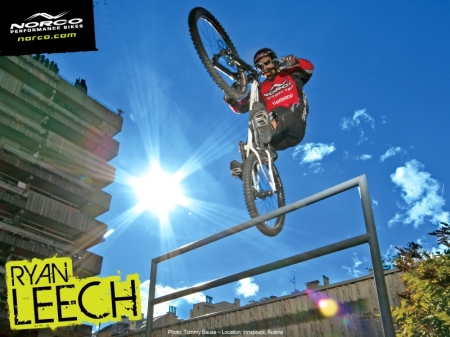 Ryan Leech has been a friend of FeedTheHabit.com for a long time. The man is likely the most talented trials rider ever and he’s a class act to boot. I chatted with him at Interbike last October as I swung a leg over the new Norco Fluid LT1 prototype and he was as happy and friendly as ever. Ryan is truly a one-of-a-kind individual and athlete who takes time to chat with fans and truly cares about the image he portrays of himself and of his sponsors.

I also had a good chat with Norco’s Peter Stace-Smith about Ryan and he had so many good things to say about Ryan that it just confirmed to me once more that we are all stoked to count Ryan as a friend and an industry icon.

We got our first glimpse of Ryan’s skills on the big screen when we premiered Kranked 4. We have since gawked at his amazing talents in The Collective and then ROAM. We will soon have our jaws wide open as we showcase Ryan once again with the showings of SEASONS in May (Salt Lake City – Brewvies) and June (Park City – IMBA World Summit).

So, hop on over to Ryan Leech’s new Web site and support the man, the legend.