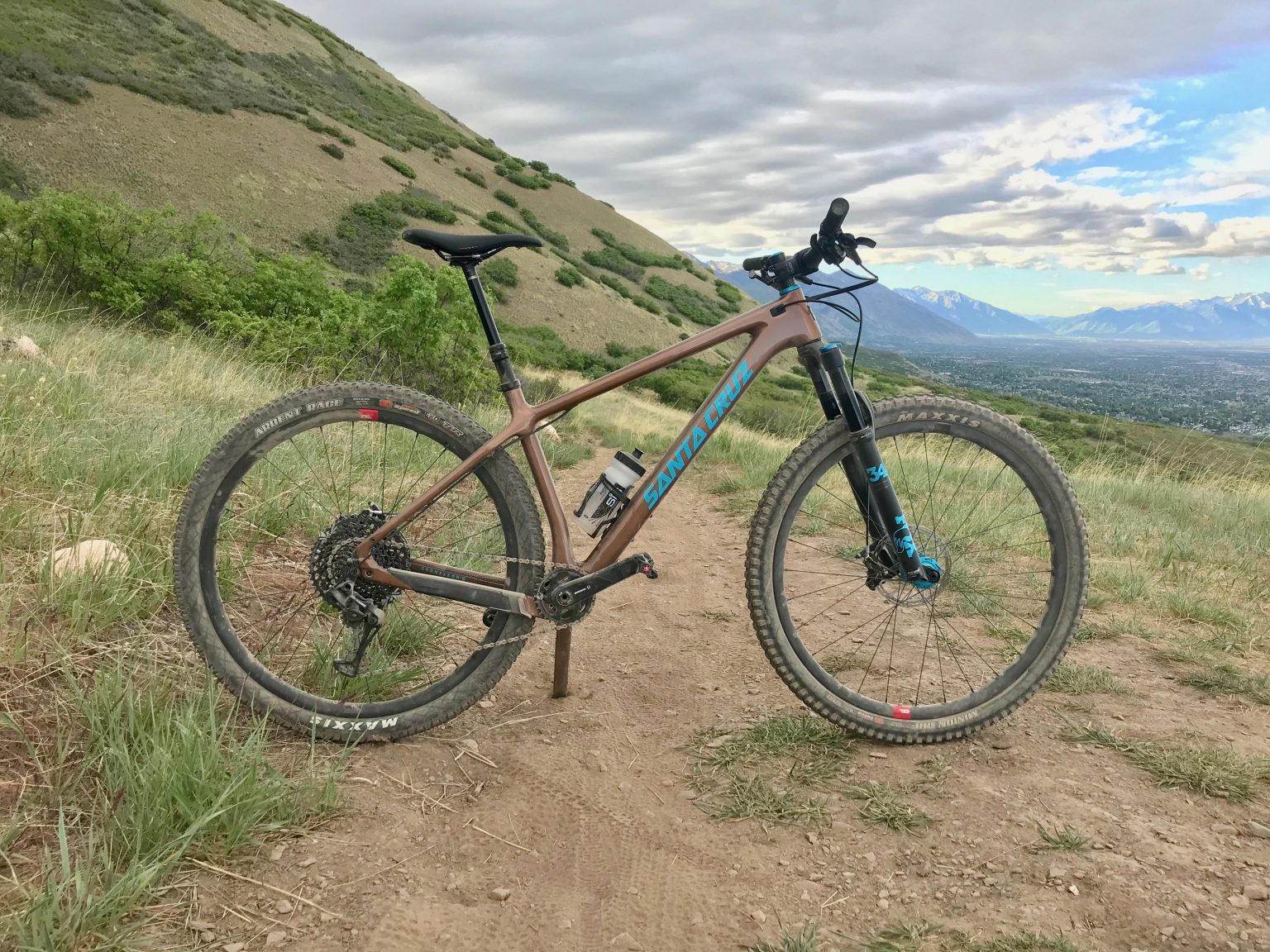 Almost every mountain biker got their start on a hardtail. The simplicity makes it easy for anyone to enjoy the sport and not worry about suspension settings and maintenance. Somewhere along the way, most upgrade to a full suspension, but that shouldn’t be the only choice. Santa Cruz offers up the Chameleon C as a rowdy hardtail that can reasonably serve as a full-suspension substitute that’s lightweight, capable and fun to ride.

The SE kit is a pricey, but awesome upgrade

Yes, you can get a Chameleon C starting at $2699, but just what makes the $4799 Chameleon C SE tick? For starters, it is decked out with a set of Santa Cruz Reserve 27 carbon wheels that don’t mess around. These hoops are 27mm wide internally for a fuller tire. They also feature a hookless bead that provides a stronger rim profile that’s durable enough to endure the best that Danny MacAskill can throw their way. They roll smooth, spin up well and have held air like champs throughout my testing.

On top of that, you’re looking at a capable, full SRAM GX Eagle 1×12 drivetrain mated to the X1 Carbon DUB crankset. Certainly, there are higher-level SRAM components you could add, but GX Eagle is all you really need (read our review) and helps keep the already budget-stretching price down. (Truthfully, GX Eagle is actually pretty common at this price point.) The full kit looks fantastic and those matching Hope hubs and headset really set the SE 29 build apart.

I’ll add that I pretty much always swap out any stock bar and stem with the RaceFace Turbine R 35. But, after a single test ride, I swapped them back to the RaceFace Aeffect R 35×780 bars that Santa Cruz spec’d on this bike. I’m going to trust the Santa Cruz product team here because it simply rides better with more overall comfort and control.

The third-tier Fox Performance 34 120mm fork is stiff and smooth and can take serious abuse. While I’d hope for the Factory version at this price, this one has done an admirable job with a stiff, responsive chassis. I used the on-the-fly compression to adjust between firm, trail and open as needed. I primarily kept it in trail mode, but did open it up or put it in firm as needed.

It didn’t take long to give the Chameleon C a proper Utah welcome. The local trails are filled with flowy singletrack and lung-searing switchback climbs. On the way down, there’s always the occasional rock garden and drops to keep things interesting. Most of the time I’m riding 12-15 miles with fire road approaches and a bevy of awesome singletrack in the middle.

On those approaches, the Chameleon is a willing partner that’s able to drone out the gravel miles like a champ. Since Santa Cruz bills the Chameleon as a bikepacking tool, it’s no surprise that the bike is perfectly-suited for this. But, the Chameleon C SE comes to life when the trails get rowdy. Now hold on… I know you’re thinking, “just how rowdy can a hardtail get?” Well, pretty rowdy, but don’t expect this to replace your 5010. It’s a different tool and takes the right strokes to maximize its potential.

The Maxxis Minion and Ardent Race combo are a good width (2.3/2.35) and feature significant lugs for the ultimate traction front and rear. But, since it is a hardtail, you have to balance tire pressure just right to keep the rear tire from bottoming out. At my 170 lb weight and riding style, 21 psi in the rear and 19 psi in the front allows me to toe the line between comfort, traction and impact protection. I will have a slight impact or two during an entire ride, but otherwise it’s golden.  The slack geometry of the Chameleon C does tend to put more weight rearward, so that’s also part of the challenge of choosing the right tire pressures.

So, with the right tire pressure, it’s time to push the limits of this rowdy little beast. It truly is a blast to rip down bermed descents with drops and hits. Drop that saddle and angulate — the Chameleon C SE is going to obey your every input. It feels balanced when hitting airs and always lands smoothly. Underneath you, that chassis is solid and unrelenting, so you can expect excellent power transfer and a bit of a stiff rear end. Going carbon over alloy in the Chameleon is really about weight reduction and snappiness, not necessarily comfort.

Again, whipping the Chameleon through fast, rough descents is great. Keep in mind that this is still a hardtail, so you’ll get a little bit of a buck every once in awhile if you choose the wrong line. So, take care and finesse those lines just right to maximize the Chameleon’s ability to pump through rolling terrain without getting kicked in the hind end.

As far as climbing goes, this 26 lb hardtail can hold its own, within reason. Santa Cruz makes the Blur and Highball as their top XC racers, so don’t expect the Chameleon to compete with those optimized machines. As such, I’m getting respectable times on all the long and challenging climbs I’m hitting. On rough sections, you’ll get bumped around a little (bounce with me bounce with me) as compared to a full-suspension . It does throw off your climbing cadence when it happens, but things settle back down and you’re off to the races.

Thanks to the Covid lockdowns, I’m in pretty good shape for this time of the year and I’m able to push the Chameleon with gusto. I actually felt really good about the time logged on the following segment until the Trek Supercaliber 9.8 came along and obliterated everything. I’m sure the Santa Cruz Blur would eat the Chameleon’s lunch in a similar battle.

So, that being said, the Chameleon is built for rowdy riding and can handle anything you can throw at it. It can climb well and is a blast to ride downhill. But, yes, it’s still a hardtail, so 45-yr-old dudes like me will develop a bit of a sore lower back on long rides. I’ll add that it can rip through uphill switchbacks with ease and remains straight and true on even the steepest of climbs. Keep on it and the front end doesn’t wander — you’ll make it to the top. You do have to find that proper balance point on standing climbs to maintain traction, but that’s standard stuff with a hardtail.

At slow speeds, the Chameleon C remains nimble and capable. When obstacles present themselves, you can course-correct and get back on the path. But, even if you can’t, it’s able to roll over rocks and roots like a monster truck in 4WD low.

Not only can the Chameleon C ride just about anything, it can also be converted to singlespeed if you’re into masochism… err… that sort of fun. And, with that wide-open front triangle, you can load the frame up with bags of all shapes and sizes to haul your butt deep into the backcountry. Speaking of the front triangle, there’s room for a single water bottle cage and it’s waaaaaaaay down at the base of the front triangle. With a standard bottle, it’s quite the stretch to reach, but with a larger bottle, it’s better. It’s placed down there to purposely accommodate bike bags, so I guess I’ll live with it. There is a single mount under the downtube if you’re into drinking from a water bottle nozzle that’s contaminated with who knows what from that front tire. Just get yourself a bottle with a nozzle cover if you’re going to use that mount.

Sizing: I’m 5’11” with normal proportions and I weigh 170 lbs. I went with the size large and kept the fork at 65 psi for best performance.

You know what the Santa Cruz Chameleon C SE is — it’s a bruiser of a hardtail that’s built to have fun anywhere you ride. With that, it is a capable and fun descender and loves to rail high-speed swoopy singletrack. As a climber, it holds its own and remains straight on the steepest of climbs. And, the overall spec is admirable with a durable, light and reliable wheelset. The price is up there, but if hardtail fun is what you’re after, this is a baller.

As one of their longest-running bikes, Santa Cruz finally delivered the Chameleon C(carbon) last year. With it came a full makeover with modern lines and a focus on geared, singlespeed and bikepacking options. It's a capable do-it-all bike that does a great job of trying to help you forget about full-suspension, but not quite. It's definitely an agile, capable climber but don't expect it to beat out an XC racer. At the SE Reserve trim level, you'll be spending a lot of hard-earned cash (and the price is the biggest knock on this fun machine), but it's a beautiful, reliable build with high-quality parts -- and those Reserve 27 carbon wheels are outstanding.