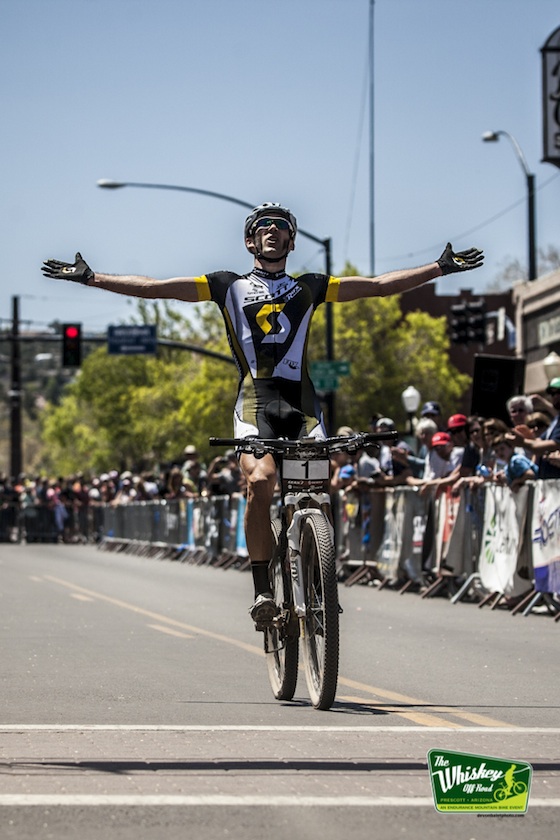 Team Scott-3Rox came to Prescott, AZ with the goal of repeating. Reigning men’s champ, Geoff Kabush, rocked the field for a 5 minute win while fellow team member, Lesley Paterson, rode away with the women’s title. Here are the details from Scott Sports:

The Whiskey 50 is one of America’s premier Mountain Bike events with a fat purse and the best riders on the continent contesting the event. SCOTT Sports is the Official Bike of the Whiskey 50 in Prescott, Arizona. Leading up to this weekend, tensions ran high for the registered Pro’s planning on competing when USA Cycling threatened to fine and suspend licensed professionals who started at the Bike Tournament. In reaction, several teams sent their entire roster, creating a field that was truly the best in North America. In the end, SCOTT-3Rox rider Geoff Kabush triumphed with a five minute gap to win the Men’s race while XTERRA World Champion Lesley Paterson delivered the win in the Women’s race with a two minute gap.

Geoff opted to ride his full suspension Spark 900 once again, feeling it offered him an advantage over the hardtail. “I was able to put several seconds into the field after the turnaround because I could carry more speed on the Spark,” said Kabush. “When I entered the final descent I could really open it up and put more time between myself and the rest of the field. It feels great to win a purse like this at an event that is so fun with great trails and atmosphere. I wish this is what every weekend was like.”

In the Women’s race there was a tight battle at the front until the group reached the climb at Skull Valley when Lesley Paterson made her move. “I went conservative in the beginning,” explained Paterson. “I felt like my advantage would be on the climb with my power to weight ration so I drilled it and put 1.5 minutes into the group by the top. I really didn’t know the course that well and just gave everything to bring my lead into town. In the end it paid off.”

“We came to Prescott guns a blazing for the Whiskey 50,” said Adrian Montgomery of Scott Sports. “It was perfect, we’re the Official Bike of the event and officially took home the ‘W’. Needless to say, the Whiskey Off Road is an event we’ll be back for and we are stoked looking forward to the Grand Junction event.”