We are looking forward to the release of Seasons from our long-time friends, The Collective. We will be bringing the film to Salt Lake City and Park City some time in early May 2008. Stay tuned for showtimes and locations. In the meantime, check out the trailer and more information directly from The Collective.

More Info from The Collective

The Collective, producers of Roam and The Collective have launched a new website and trailer in support of their latest mountain bike film, Seasons. Visit www.thecollectivefilm.com to see the trailer, rider videos, photo galleries, and more information about the film and its sponsors. Seasons is a film that follows seven of the world’s top mountain bikers through the course of four seasons of one year. The film explores what it means to be a full time rider as told through the lives of downhill racers, slopestyle competitors, and big mountain freeriders.

The main riders in the film are: Darren Berrecloth, Matt Hunter, Cam McCaul, Steve Peat, Andrew Shandro, Steve Smith, and Thomas Vanderham. There will also be some guest appearances by others who cross paths with the main seven riders. The Collective has been working on Seasons non-stop for the last twelve months, and is now in post production on the film, cutting together footage from multiple shoots with every rider, ranging from slopestyle competitions to World Cup downhill races, to epic backcountry freeride shoots.

“The film has been a ton of work for everyone involved,” says Jamie Houssian of The Collective, “so it’s nice to finally see it come together in the studio. It’s a new type of film for the action sports genre. We’re stoked to show people something a little different”.Seasons is sponsored by Specialized, Shimano, Adidas Eyewear, Whistler Mountain Bike Park, Bontrager, Dakine, Helly Hansen, and Pinkbike.com. The film’s theatrical World Tour starts in April 2008 and the DVD will be available in May 2008 in bike shops worldwide and from www.thecollectivefilm.com. 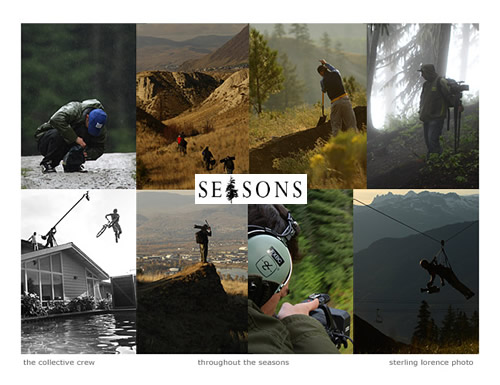