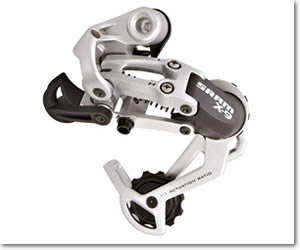 When I started mountain biking in 1990, the only viable mountain bike drivetrains were made by Shimano. Their RapidFire shifter pods enabled you to shift with the push of your thumb–both upshifting and downshifting. Then, along came GripShift (which became SRAM) with its moto-inspired throttle shifting mechanism. To me, it was weird, but for some, it was heaven sent–if only to kick behemoth Shimano in the shins. GripShift still lives on as SRAM.

Twist Shifters and has a strong following in the XC racing crowd, with offerings throughout their product lineup. But, their latest shifting technology–SRAM Trigger Shifters–are the slam-dunk that SRAM needed to finally not only kick Shimano in the shins, but beat them over the head with their shiny carbon bits.

Man, that sounds violent… I don’t mean to be violent. I’m just tired of underperforming, proprietary Shimano technology shoved down unassuming mountain bikers throats. I’m tired of Shimano forcing everyone to conform to their new “standards” in hub design and integrated shift/brake levers (didn’t that idea get killed once already?). I’m tired of having to take my fingers off the most important piece of equipment in a gnarly downhill–my brake levers–to shift. I’m tired of grabbing a fistfull of brake, only to downshift or upshift accidentally–thanks to Shimano Dual Control levers.

Is anyone listening to the real needs of mountain bikers? Does anyone really ride bikes anymore, or do they just sit in their Japanese headquarters creating awkward new shifting technologies that are a step backward?

Ok… I need to calm down. To answer my own question, SRAM has been quietly listening, taking notes, and carefully designing their Trigger Shifters and derailleurs to unseat the behemoth. SRAM and I are on the same page… fingers are for braking and steering, while thumbs are for shifting. Say it with me now: fingers are for braking and thumbs are for shifting. Now, lets see what they’ve come up with.

Over the past couple of seasons, SRAM has broadened their component offering to include complete drivetrains (shifters, front derailleur and rear derailleur) at many different pricepoints. The X.9 is the equivalent of Shimano’s XT series and offers workhorse performance in a lightweight and durable package.

Both SRAM Triggers and Twist shifters use a 1:1 ratio. That means, one short click translates into one quick shift. There’s no extra thumb movement to throw you out of your groove.

The X.9 product line consists of Trigger Shifters, Twist Shifters, front derailleur and rear derailleur. All components are primed and ready to be paired with any brakes on the market, and SRAM hopes you choose Avid brakes. Avid brakes are awesome, but that’s a different story.

The SRAM X.9 rear derailleur has been engineered to simplify adjustment and cable routing. Of course, it uses SRAM’s 1:1 actuation ratio for crisp shifting in all conditions, but there’s other features that make it stand out in my book. The first of those features is the ingenious cable routing. Those familiar with the loop of death required for all Shimano derailleurs will love the direct cable routing, thus reducing the chance of having your rear derailleur cable yanked out by an unassuming branch. Another great feature is the easy access to the high and low adjusting screws. The bottom line is that these derailleurs are a step above the competition.

After using the SRAM Triggers for an entire season, I can’t imagine going to anything else. And, when I do ride anything else, it makes me want to carry around a spare set of SRAM Triggers to swap them out on the spot. Once you ride SRAM Triggers, you’ll quickly realize something that should be brain-dead stupid–thumbs are for shifting and fingers are for braking. What a novel concept! so, with SRAM Triggers, you can upshift and downshift without taking your finger off your brake lever. You maintain complete control of your bike at all times and, most importantly, you are ready to grab a fistfull of brakes at any time. These shifters are by far the best shifters on the market. Try them and you’ll become a believer too.

SRAM has you covered with the best performing and most flexible mountain bike drivetrain components available today. After a year of flogging several X.9 and X.7 drivetrains, I am even more of a believer than ever before. Now I know that SRAM has built shifters that allow us to shift like God intended… with our thumbs! As you look for your next bike, you’ll begin to see more and more bikes SRAM-equipped, and that’s a beautiful thing.