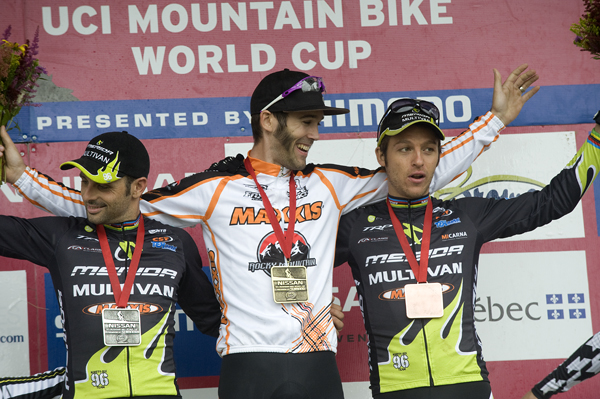 While the West of Canada experienced record setting high temperatures, the province of Quebec had been hit by heavy thunderstorms for several weeks in a row, turning the Bromont dirt into thick mud. Maxxis–Rocky Mountain’s Sabrina Jonnier who had won the previous five events felt out of her element in the extremely wet conditions and qualified in a disappointing sixth position. After Friday’s qualifying it appeared that a sixth consecutive win might not be possible for Jonnier. 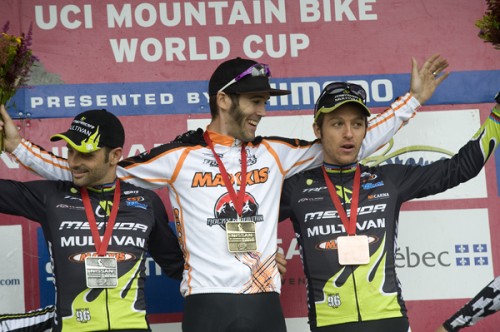 The rain held off for Friday afternoon and the sun came out on Saturday, just enough to dry the course a bit for the start of the women’s downhill event. Junior World Cup leader Anais Pajot (Team Sunn) was the first to go below three minutes and 12 seconds in the women’s race, and took the Nissan Hot Seat. Pajot held the top spot for three riders before being displaced by Anita Molcik (Yeti Fox Shox), who was in turn bumped by American Kathy Pruitt. Pruitt was immediately replaced by Canadian Micayla Gatto (Commencal). Gatto, lasted through one finisher before she also had to vacate the lead spot for Celine Gros (Morzine-Avoriaz 74). However, Jonnier was up only two riders later, after an uncharacteristically slow qualifier that had her seeded sixth. The French rider obliterated the rest of the field, becoming the only rider to clock under three minutes. Floriane Pugin (Iron Horse-Kenda-Playbiker) took second, while Japan’s Mio Suemasa was third.

“I’ve been sick all week,” revealed Jonnier “and I had no energy. I was really disappointed with my qualifier, it was the worst that I have had. But the weather changes dried the track out and made it more to my liking. Even so, I was really surprised at how fast my time was.” 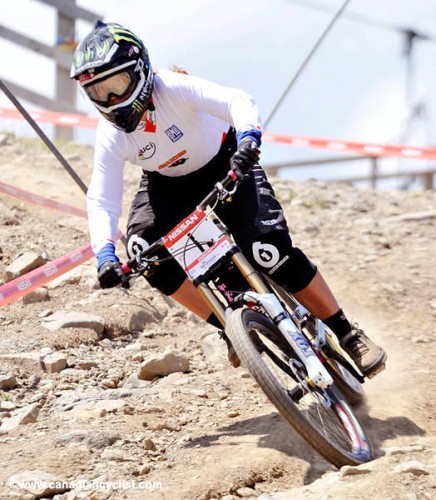 Team Maxxis-Rocky Mountain’s Geoff Kabush got the win of his career Sunday winning the Bromont World Cup in a stacked field. Kabush, who is currently tied for the most U.S. series cup wins of all time and has had 8 previous World Cup podium finishes, but until now had never stood at the top of the World Cup podium.

The men’s race began under worse conditions than the women, if that was possible, with officials reducing the distance by one lap to six. The rain and the 50-plus women racers had churned up the mud, making the climb an even harder grind than usual. The mud also began to impact equipment, with most riders experiencing brake failure at some point in the race as brake pads wore away in the gritty mud.

Ralph Näf (Multivan Merida) got off to his usual fast start, and was quickly joined by Absalon, with Kabush steadily making his way up towards the front. Näf dropped back from Absalon on lap two, to be passed by Kabush, who joined the Olympic champion near the top of the climb, just before Absalon broke his chain, putting him out of contention as he lost nearly 40 places before rejoining the race.

Kabush was now alone at the front, with Näf dropping back to a chase group with his team mate Jose Hermida, Florian Vogel (Scott-Swisspower) and Nino Schurter (Scott-Swisspower). Kabush would continue to power away from the chasers to finish over 90 seconds in front of Hermida, with Näf holding on for third ahead of Vogel and Lukas Flückiger (Trek World Team). Both Todd Wells (Specialized Factory Team) in ninth and Adam Craig (Giant) in tenth moved up in the latter half of the race. 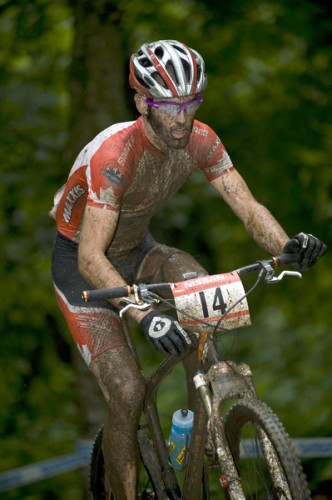 Brakes were a problem for many riders, with Näf explaining “in the final lap and a half I started to lose my brakes completely, and trying to ride through the technical parts became very, very dangerous. I had to slow down a lot, and I think otherwise I could have stayed in second. I could not have caught Geoff, because he was so strong today and riding everything so well.”

Hermida, the winner of round one in South Africa, said he also suffered from brake problems, but the timing was more fortuitous. “I was lucky that my brakes stopped working early in the race rather than late, because I stopped then in the technical area and was able to catch people later in the race when their brakes failed.”

“To win here, in my own country, it still hasn’t sunk in,” said Kabush. “I knew I was riding well, after finishing third a week earlier, and this course really suited me, so I was confident that I could go head to head with Julien. It’s too bad that he broke his chain, because I am still confident that I could have ridden against him. I didn’t have any of the mechanical problems the other riders were having, so I really have to thank my team and the mechanics. I went with the hardtail and the mud tires, and I was able to ride everything with no problems. This win is the biggest of my career, because with Julien so strong, for anyone to win a World Cup is very hard. This just shows that it can be done.”