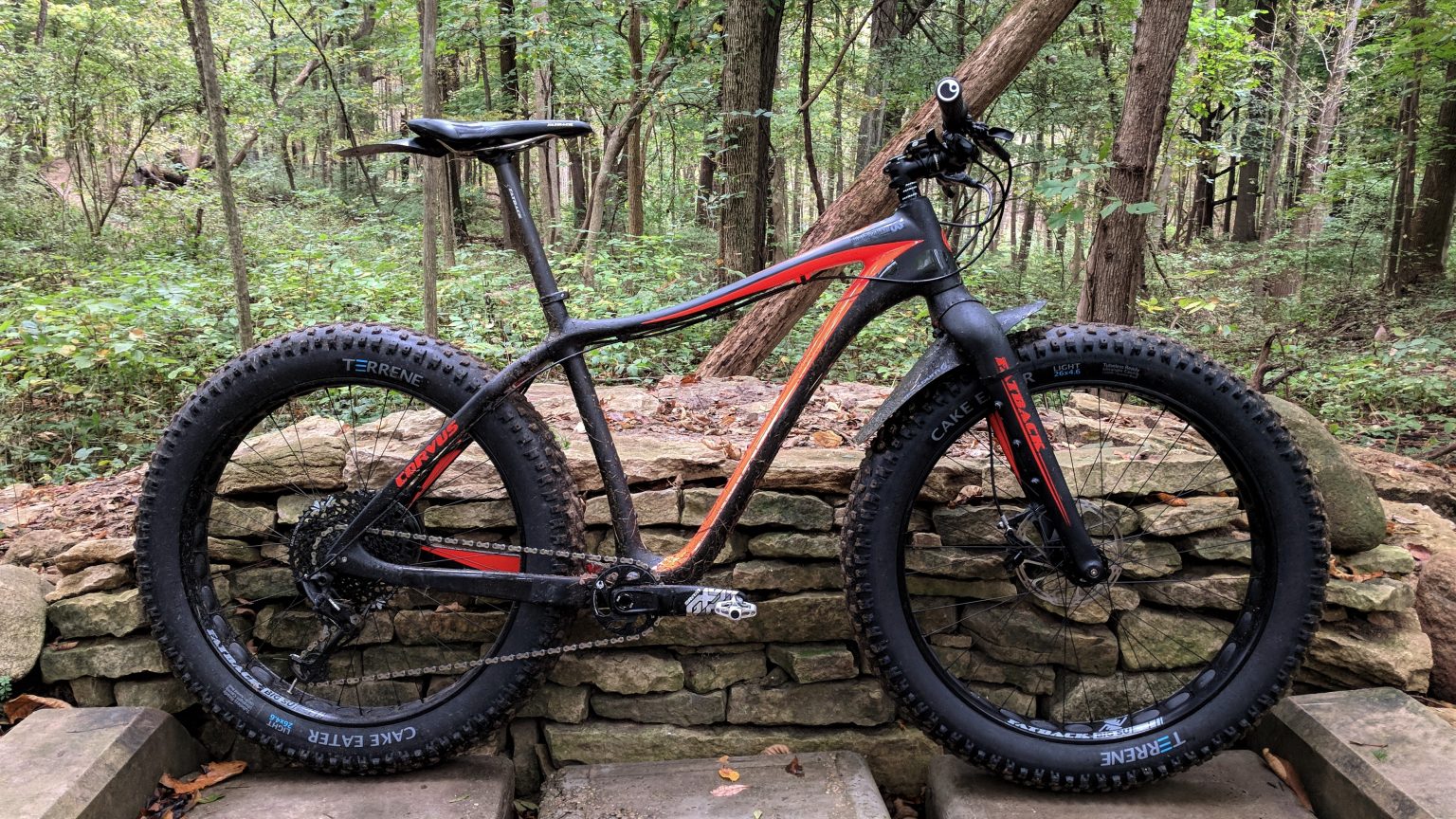 There is a tribe of fat-bike-riding hooligans near me who call themselves the Mad Cows. To be clear, they were riding fat bikes before it was cool. At first, they bought cheapish rigs off the internet, just to get outside during the long, soggy Ohio winters. They liked doing that so much, they built their own mountain bike park. Then they started racing their fat bikes at the park. And everywhere else.

Most of the Mad Cows now ride full-on fat race rigs, and the herd has swelled to the dozens. So has their race series. Their events are everything you loved about playing on bikes with your friends as a kid: completely ad hoc, free to anybody who shows up, and silly amounts of fun. Last year, feeling fit and frisky after I finished my second Lumberjack 100, I thought I’d crash a couple Mad Cow parties on my 29er hardtail. I reasoned that in short races, the quick-flicking handling would allow me to gobble up the field, and in longer races, the lighter weight and lower rolling resistance would let me pick them off at will.

On paper, these things are correct. In practice, I got my clock cleaned.

I fully expected a few Mad Cows to trample me. They have some absolute freaks on the squad. But I found myself challenged, passed, then dropped by riders who I thought I could handle. Well, I thought, if you can’t beat ‘em…

Luckily, my Bike Whisperer had just the solution for me. It was fat. It was carbon. And it was gorgeous. 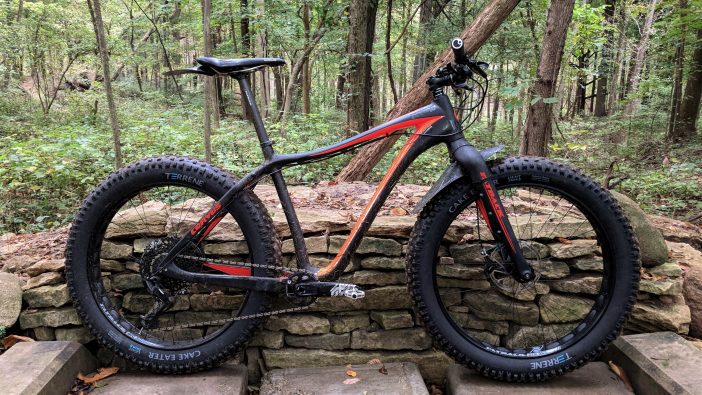 From Alaska, With Love

The Fatback Corvus is the all-carbon culmination of over a decade of development of the fat bike in its natural habitat: Alaska. Rather than trying to jump onboard the latest fad, Fatback has always made fat bikes and only fat bikes. That singular focus enabled them to solve the specific engineering problems fatties present: geometry, tire clearance, drivetrain and hub symmetry, and so on.

If you’re the kind of rider whose eyes glaze over when reading about hub standards, and head tube angles, and percentage gains in stiffness, good. Me too. This isn’t going to be that kind of review. I’m here to tell you how the Corvus works.

Prior to throwing a leg over the Corvus for the first time, I had toyed around on several different fat bikes. I thought they were fun, but niche. Grin-inducing, but impractical. It was cool to be able to run over logs and curbs at full speed without even lifting the front wheel, but I still ranked a fat bike purchase somewhere below a cargo bike on my mental “n+1” list. They were a tool for jobs I don’t often do: riding in snow or sand. Not a lot of beaches in southwest Ohio, and our annual snowfall is usually just enough to be annoying. There are no huskies pulling sleds past my house.

So even though I had been persuaded to give fatties a chance by a serving or three of competitive humble pie, my expectations were not high. I forecasted awkward handling, sluggish steering, brutally hard climbing, and shattered legs from pushing around all that rubber. I figured I’d tool around for a few months, never really like it, and get back to my comfortable, quick, and competent 29er.

In fact, these are the exact reasons I used to convince my wife (the most wonderful woman in the world, who has tolerated and even encouraged my two-wheeled shenanigans for the entirety of our thirteen years together) that it was okay for me to add yet another bike to the stable; one that I couldn’t even hang up with the rest, owing to the fact that none of the hooks in the garage can accommodate a five-inch tire.

Yep. Fat bikes are a fad, honey. And this was just a phase I needed to go through. Then, I rode the thing. 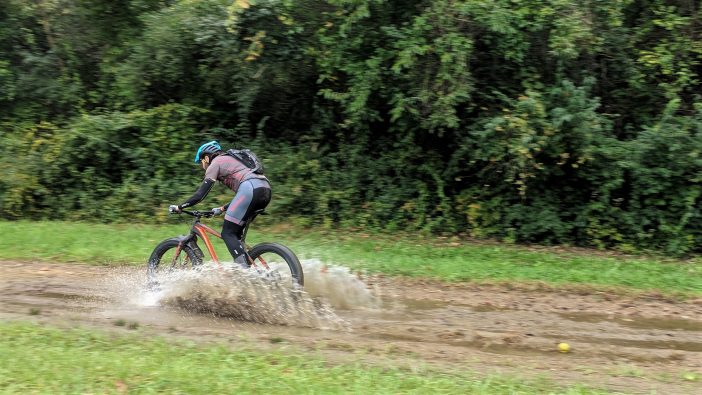 The first thing I noticed was the total disconnect between what my eyes told me I was riding, and what my hands and feet insisted was going on. I looked down and saw a 4.6in Terrene Cake Eater growling along the dirt with a sound like a lifted pick-up truck. Then I dove into a descending left hander, and the bike dug in and railed it. I looked up at a steep, loose gravel grade, and figured I’d be off and walking halfway up. But my legs informed me as I reached the top that tractoring up the climb with SRAM’s GX Eagle drivetrain was no big deal.

Then I got home and weighed the thing, and found out it was within a pound or so of my 29er, a mere 27 lbs. with pedals and cages. Wait, what!?!? Time to give this thing an honest go. I cut two inches off the bars, flipped the stem and dropped it by a spacer, and installed a set of my favorite grips. The aggressive side lugs on the Cake Eaters had a tendency to auto-steer at low pressures, so I added a pound or so to the front tire. If you haven’t ridden fat bikes, you’ll want to play close attention to those tire pressures because a psi or two makes a huge difference.

My next ride was in the freezing rain at the DTE Energy Foundation Trails near Waterloo, Michigan. I chased my effortlessly fit brother-in-law on his fully decked out S-Works Epic through all the flowy, bermy, jumpy goodness, and was shocked to hear myself giggling. This fattie felt like a hot rod! I was carving corners, powering up climbs, and actually leaving the ground off the jumps. This was a trail system completely unlike what this bike was designed to do, yet here I was doing it anyway.

Fast forward a month, and I found myself lined up at the start of Gravel Grovel, the annual post-Thanksgiving beatdown in southern Indiana that I like to use as the punctuation mark on my season. This is a ride that the raw stats (60 miles and 4000 feet of climbing) tell nothing like the whole story. There are long stretches of backcountry singletrack on the route, and the seasonal weather patterns can really accentuate the “grovel” part of the ride.

If you live in the Midwest, you know that it rained about every 45 minutes for all of 2018. Add in some freeze/thaw cycles and temps in the high 40s, and you have a recipe for a soggy slog-fest of historic proportions. I may have gotten some funny looks from the riders aboard CX machines at the start, but by mile 15, their bemusement had turned to chagrin, even envy. When the mud became three inches of peanut butter, I selected the 50-tooth rear sprocket (yes, you read that right), and spun right through it. Uphill, downhill, off-camber, didn’t matter. The tires slipped but never slid, the brakes squealed but never locked, and the only time I had to stop was about mile 48, when the chainring packed so full of mud that it forced the chain right off of it. 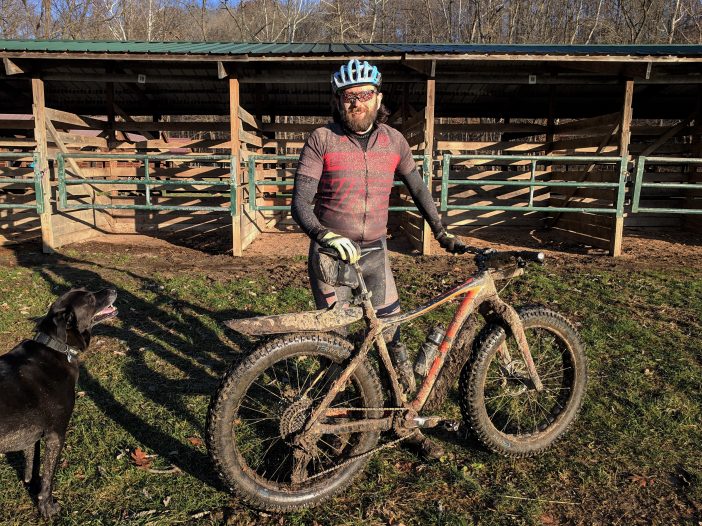 What Can’t This Bike Do?

Back home, after hosing off several pounds of mud and replacing a frozen bottom bracket, I stood back and regarded the Corvus with new eyes. For a bike I had supposed would be niche, it has a shocking degree of versatility. I’d flown off jumps, slogged through deep mud, motored up steep gravel climbs, even hummed along bike paths and flat gravel trails at a comfortable 17-18mph. And I had done all this with a bone stock bike, using just one of the three wheel and tire options. If I mounted up a 27.5+ or 29er wheelset, which the frame will also accommodate, I’m hard-pressed to think of a task this bike couldn’t do well.

If fat bikes have become a religion, consider me among the converted. The Fatback Corvus, far from being the specialized machine I forecasted it to be, has the very real potential to be a quiver-killer.

Fatback took a decade of development to create a fat bike that doesn't act like a fat bike. Want a bike to ride anywhere, any time, in any conditions, and get there with a reasonable amount of speed? You'd be hard-pressed to find a better rig.

After fifteen years in the Air Force, Pete decided he didn't like making money, so he took up freelance writing. He lives in southwest Ohio with his wife and pup, and aspires to someday become the world's most mediocre cyclist. If it's got two wheels, he'll probably try it.