The Collective was born out of a desire to assemble the world’s best freeride mountain bikers with the most talented photographers and cinematographers. The result is a high-quality 16mm bike film that blows all previous films away.

Here’s what the boys at The Collective have to say about their vision for the film:

“The Collective is a group of filmmakers, photographers and mountain bikers. By drawing on the experience, expertise and creative energy of every member of the team, The Collective hasa created a film that portrays the newest, cutting-edge images of the Freeride progression, while exploring the thoughts and personalities of the riders leading that progression.”

“We believe that the collective approach to producing this film has resulted in an end product that truly reflects the depth of the sport and those who are pushing its boundaries.” thecollectivefilm.com

About The Collective Bike Film

We were lucky enough to produce the premiere of The Collective in Salt Lake City, UT. As is typical of the Teton Gravity Research and Radical Films we’ve premiered in the area, we were equally stoked for The Collective–and so were the locals. We have a reputation to uphold as bringing the most progressive mountain bike and ski films to the area and I was confident this film wouldn’t disappoint.

After many conversations with Darcy and Jamie, I was so stoked on the film I could hardly wait. They are genuine guys with a serious bug for meticulous editing and creative filmmaking. 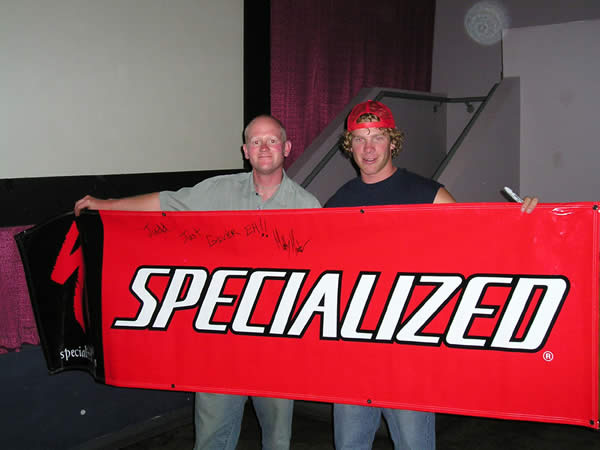 Due to some delays in the production process, we received our copy of the DVD the day of the show–phew! I was sweating bullets, but it all worked out in the end. Actually, this worked out for the best because I was seeing the film for the first time with the audience. I didn’t know how awesome the film would be–it would be judged by the smile on my face and the reaction of the crowd.

Well, my smile couldn’t be bigger and the packed house at Brewvies couldn’t agree more. The Collective delivered the goods with a flair far above any previous mountain bike films.

To boot, the boys from the Element Roadtrip stopped by for the premiere. Matt Hunter, Specialized rider and star of the film showed up to woo the crowd along with Mitchell Scott, roaming editor for BIKE Magazine. We were glad to have the crew there to represent this awesome film.

Honestly, The Collective film is my favorite mountain bike film to date. The innovative cinematography and gutsy shots really set this film apart from the many others out there. You’ll be amazed at the quality of shots they get from helicopters and from zip lines strewn through the forest. No other film to date has captured the soul of biking like The Collective.

Do yourself a favor and hook yourself up with a copy of The Collective film and watch it over and over again.

For a limited time, every purchase of the film will enter you to win a Specialized Demo 9 freeride bike! Hurry before it’s too late!