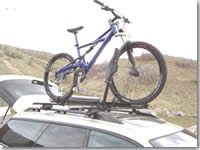 The folks at Sportworks have themselves a good thing going. Their bike rack design offers unheard of flexibility to accommodate any bike style coupled with the Quick-load System, which offers the easiest bike attachment of any bike rack on the market. They currently own the mass transit market by providing durable bike racks for the majority of the transit systems in the USA. To Sportworks, the mass transit market is like car racing for BMW or Audi–it provides technology and ideas that trickle down to consumer products. This R&D ultimately benefits the consumers by making for more user-friendly and durable bike rack designs.

The Sportworks Bob Ratchet rooftop bike rack is built using the same Quick-load lever arm system that makes Sportworks famous. This rack is built to handle even the burliest of bikes and it shows in every detail. Attachment is via good old lock nuts instead of the traditional wing nuts. This allows for a much more secure attachment, and thwarts would-be rack thieves who may not have a 1/2″ ratchet in their back pockets, but do have a couple of hands that could easily loosen the wing nuts.

The Quick-load arm is attached to the crossbar alongside the bike tray and accommodates either round or square bars with ease. If you’re looking to attach a Sportworks bike rack to your factory crossbars, look at the Sportworks Factory Bob Rack.

Once Bob Ratchet arrived, I was stoked to get it on top of my car. The weather had been warm and sunny, plus my new Cannondale Prophet had just arrived. The low-level trails where thawed and primed for riding. I’ve got THULE square crossbars on my Subaru Outback and the Sportworks design works with either Yakima or THULE bars. For Sportworks, that’s key because they don’t offer their own line of factory racks. They focus on making bike racks… period.

Attaching the Bob Ratchet was a bit different than any other bike rack I’ve owned in the past because I wasn’t familiar with how the Quick-load arm would attach to the crossbar. But, a quick glance at the instructions and I was on my way in no time. One feature I like about the Bob Ratchet is that it uses standard 1/2″ lock nuts to attach the tray to the crossbars instead of the typical wing nuts. This ensures a consistently snug fit on the rack that plagues other rack attachment styles I’ve used. For some reason, those hand-tightened wing nuts just begin to loosen with use.

Attaching the bike is easy, you just lift up the front wheel holder, extend the Quick-load arm all the way and swing it forward, then lift the bike on, swing the arm on top of the front wheel and tighten. Literally, it’s a 10 second process–very refreshing in the bike rack market!

I used the Bob Ratchet extensively with a Cannondale Prophet 1000 and Norco Six. Interestingly enough, the Cannondale Lefty Fork allows for an even more secure attachment than did the Marzocchi 66 on the Norco Six. I think because the arm was able to wrap around the wheel and the single leg design of the Lefty at once, it not only secured the bike by the wheel, but also by the fork. The Norco tops the Prophet by over 12 lbs., and most of that weight is higher due to the higher center-of-gravity. That said, the Six did wobble on the rack a bit more than I would’ve liked, but there’s no way it was going anywhere. If you’re going to be bouncing around on Jeep roads with DH or freeride bikes, I’d suggest taking it easy just in case.

The only downside to the Bob Ratchet that I encountered was that it took up a lot of real estate on the crossbars with no possibility of straddling the towers. Because of that, the bike rack had to be mounted more towards the center of the rack than I would’ve liked. This wasn’t much of an issue with a 30 lb. bike, but with the Norco weighing in at 42 lbs., I didn’t appreciate how far I had to reach to attach the bike. I would imagine that most folks won’t be transporting their pig bikes on top of their cars, but if you do, the Bob Ratchet will do it easier than any rack I’ve used. With my 50 in. crossbars, I would likely only be able to put on two Bob Ratchet racks. If it could straddle the towers, I would easily fit three.

After using the Bob Ratchet for a month, I was impressed with the ease of use and secure, vice-like grip on the bike. I was so sold that I convinced a friend of mine that they needed to look at the Sportworks hitch racks. It didn’t take them long to see the genius behind the Quick-load system. Sportworks has a unique place in the market with their trusted, mass transit racks. Nobody else has that kind of proving grounds, and Thule Sportworks Quick-load racks show off the simplicity of their design in the consumer market. If you’re going to be carrying your bikes on the roof, the Bob Ratchet is the easiest rack to use on the market. You won’t be disappointed.