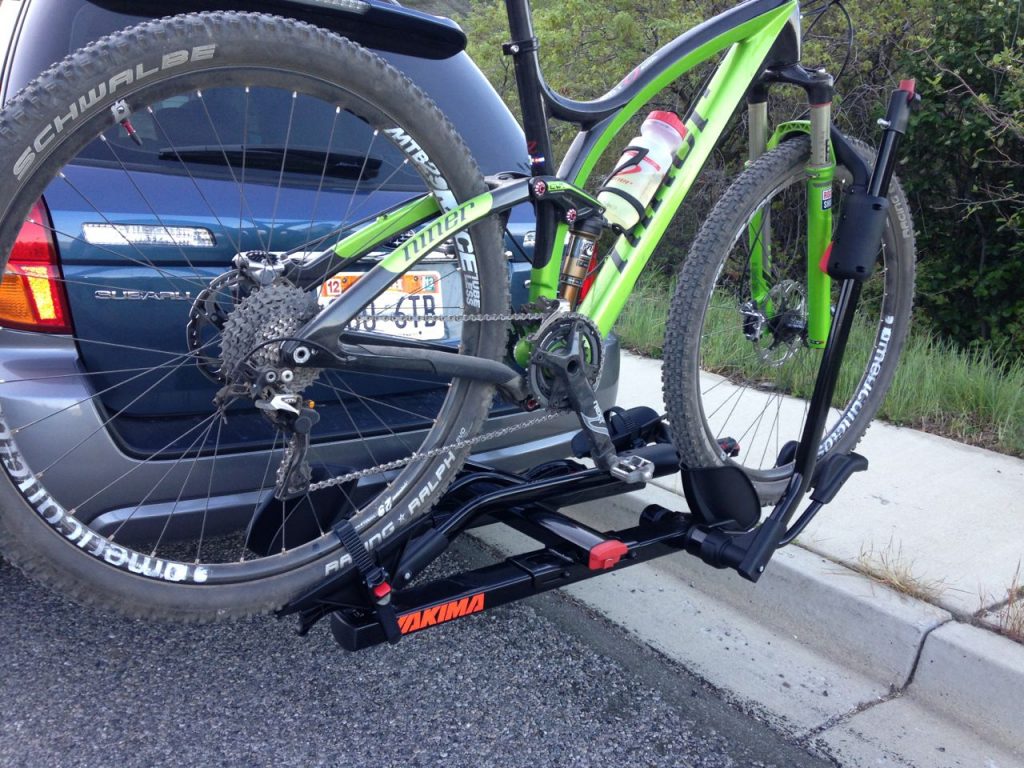 If you’re serious about hauling bikes on a daily basis, it’s time to step up to a hitch rack. But, not all hitch racks are created equal. My personal preference is a tray-style rack for the ultimate in convenience and flexibility. After using the new Yakima HoldUp 2″ all summer long, I’m won over by its good looks and solid function. 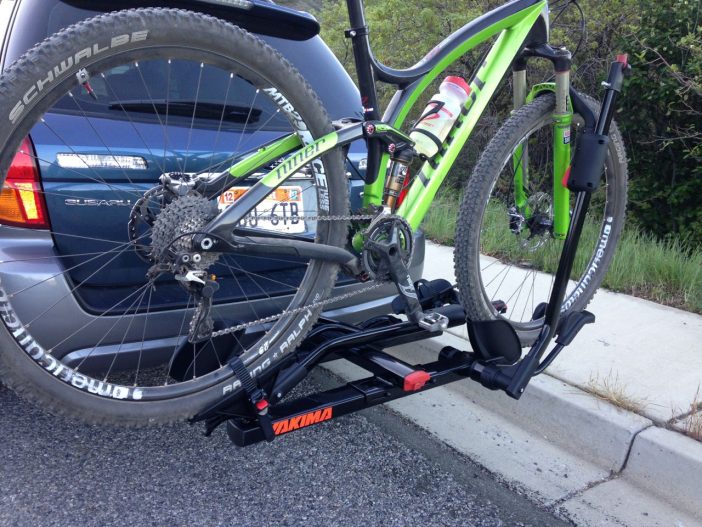 Without question, hitch racks are the best place to carry your bikes. Roof racks are nice and may give you that “I’m cool” look, but wheel removal, axle varieties, tall rooflines and low clearances make roof racks less ideal. In time, you’ll tag your garage, the Wendy’s drive-thru or your carport and not only destroy your bike, but put a licking on your vehicle. (I may or may not speak from experience.) So, yeah, hitch racks are my top choice for daily bike hauling duties.

This summer, the revised Yakima HoldUp 2″ has been my daily bike hauler on back of my 2006 Subaru Outback LL Bean. When selecting a hitch for the Outback, I went 2″ to ensure the ultimate in bike carrier capability (can expand to carry 4 bikes) and to allow the rack to be used with our other vehicle.

Out of the box

Assembly was straightforward and took about 30 minutes. Just insert the tongue into the vehicle’s receiver, tighten the bolt and then attach the trays. All tools are included and the instructions are straightforward. For flexibility and minimized bike-to-bike interference, I set up the two trays in the maximum offset available. Fine-tuning is easily done to accomodate your specific bikes.

Once installed, the HoldUp has a clean and classy look to it. The gloss black feels more refined and all rack functions are intuitive. One nice thing about Yakima is their color coding. Anything that’s red is intended to be touched. Knobs, buttons and even the bottle opener are all red to clearly identify them.

The HoldUp is unique in its compact size when not in use. Compared to other hitch-mounted tray racks, the HoldUp is significantly less bulky when not in use. Much of this is due to the folding wheel trays and nifty storage position of the tray, lever arm and rear wheel strap. Everything is held in place for a wiggle-free experience when not in use. In this position, the entire rack can be grabbed to tilt out of the way and offers the most tucked-away placement I’ve seen. 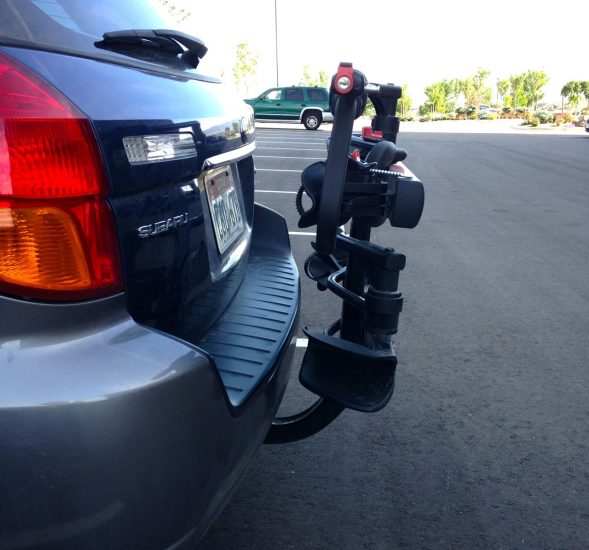 During the course of my testing, I’ve carried everything from 20″ kids bikes to full-suspension 29ers. None of my bikes are pigs, so I didn’t try to max out the weight capacity, but I carried two bikes on many occasions.  Loading is a breeze with audible clicks to let you know that the HoldUp has you covered.

The front wheel tray can swallow everything from 2.4″ 29er tires to 23mm skinnies. While I never had an issue with bikes wiggling at high speeds, the wheel tray seems like it could be allow slightly deeper wheel placement, but lengthening that opening might make smaller wheel sizes less secure. It’s really a non-issue, but you may also wonder why the wheel doesn’t sit deeper in the tray. 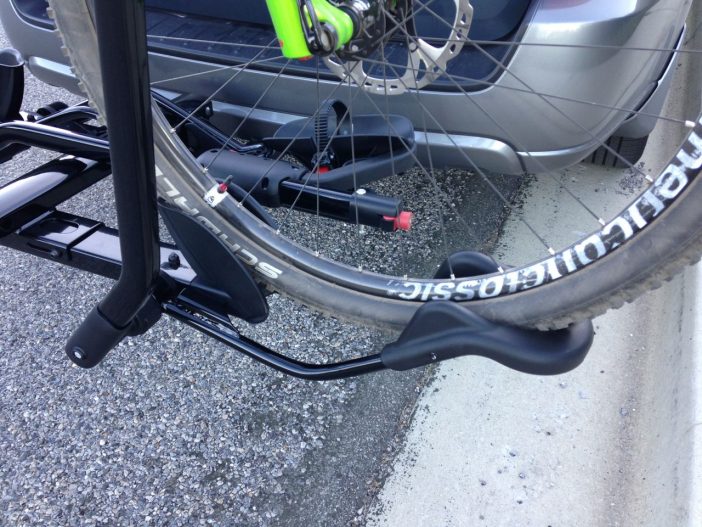 When two full-suspension 29er mountain bikes are installed, saddle heights may need to be adjusted to accomodate wider handlebars. Other than that, the only other clearance issue that may be a concern would be narrow road bike drop bars. My wife’s 42cm road bars just barely cleared the top of the StrongArm tower. If you are a petite road rider with 40cm bars, it could get tight, but should still fit.

The StrongArm hook holds all my bikes securely and keeps expensive carbon frames from touching each other with the only touch points being the front tire and rear wheel. The HoldUp is the perfect companion for those hauling expensive, carbon fiber bikes where frame contact is avoided at all cost. It’s also great for funky frame designs.

The integrated hitch lock and cable locks have been outstanding. Primarily, I carry a single bike on the rearmost tray. As such, I typically secured one cable around the frame and the innermost tray’s cable around the front wheel. This made me comfortable enough to leave the bike outside my office during the day without worry. All lock cores are included, which is not always the case with bike racks, so kudos to Yakima on this one.

The tilt up and tilt away feature is essential for hitch racks. After all, these racks are awkward to carry around and are not easily stored, so ideally it will just stay put on the back of the vehicle. Compared to the THULE T2 and Kuat Sherpa, I found the placement of the tilt knob awkward. I prefer the THULE’s lever placement overall as it’s easily reached when the trays are empty and when they are full.

When the trays are loaded up with two bikes, tilting the HoldUp almost becomes a two-person affair. From behind, you can’t reach the tilt knob through the maze of greasy, sharp chainrings, so the best way to do it solo is to squeeze between the rack and the bumper while holding the rearmost bike frame. Again, two people makes this process much easier. 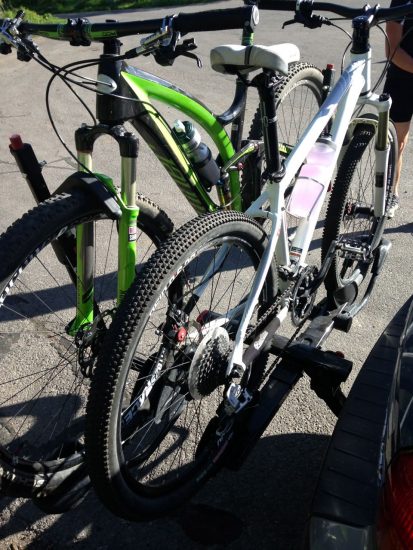 While I love the close-to-vehcile design, rear hatch clearance is an issue. With a single road bike on the rearmost tray, I could easily open the rear hatch of my Subaru Outback. But, with any mountain bike, that was not the case as the bars interfered with the rear lid. The ideal scenario with any hitch rack would be to have tilting or sliding rear glass so you don’t have to open the hatch, but not many SUV’s have that feature (Nissan Pathfinder and Toyota 4Runner are the only ones that come to mind).

The durability of the rack has been outstanding with only minimal signs of wear from near-daily use. Just a couple of small chips and minor rusting — including somewhere inside the StrongArm tower. When pulling the cable lock out, it is often covered in rust residue that it picks up from inside the tube somewhere — not exactly sure where. I just clean it off every so often, but it does make me wonder where the rust is coming from exactly.

It’s obvious that Yakima appreciates good taste and function when it comes to bike hauling. The HoldUp not only looks good and folds away nicely when not in use but it also functions perfectly day-after-day. I’ve never questioned the HoldUp and have appreciated just how easy it is to use. This one is staying put for a long time.