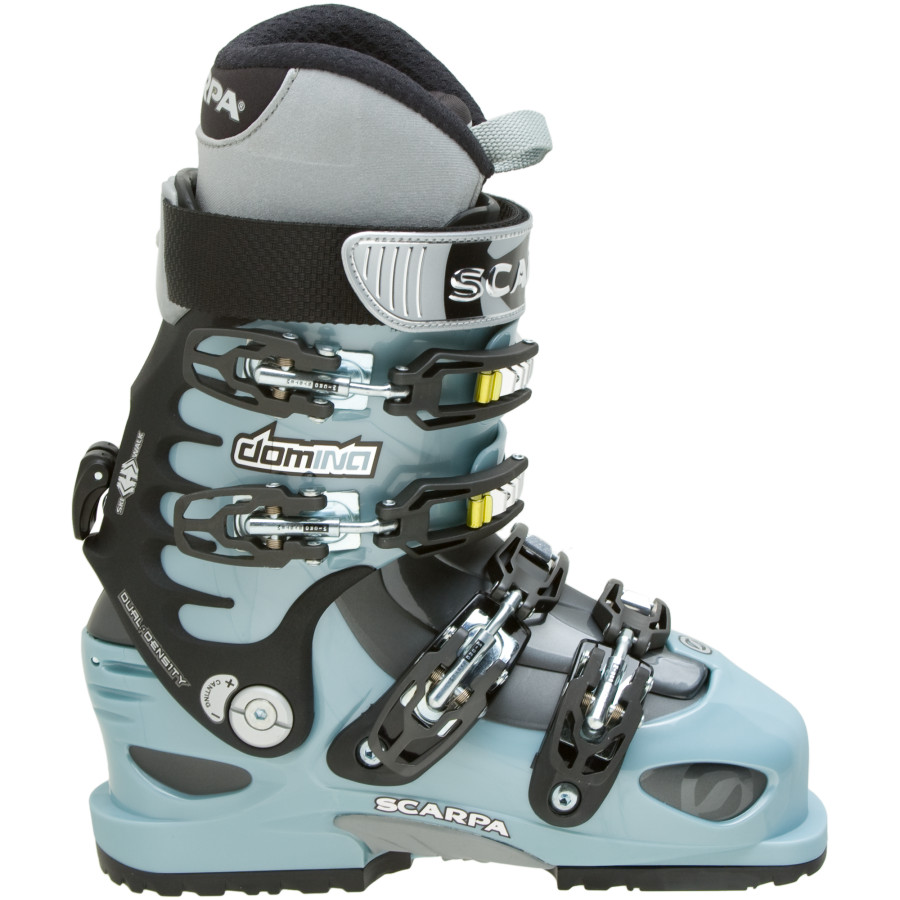 We got a little preview of what’s coming at Outdoor Retailer from Scarpa–their all-new Typhoon, Domina and Skookum (Dynafit-compatible) alpine touring boots for the 2008-2009 season. These boots will sit just above the Scarpa Tornado Pro and just below the Hurricane and aim to be the burliest, yet still tour-able A/T boots on the market.

It’s nice to see that these boots will employ a straight-up and simple 4-buckle design (like the Garmont Endorphin). The Pebax dual-density shell and build looks to be entirely top-shelf to offer both bombproof performance combined with as light of weight as possible. The Typhoon weighs exactly the same as the current Tornado Pro boots (8 lbs. 6 oz / pair). And as with the Tornado’s, the Typhoon and Domina come with the only DIN-standard rubber soles on the market. This ensures consistent and safe releases in either standard alpine or alpine touring bindings.

As mentioned above, the Skookum (read Scarpa Skookum Review) looks to be similar to the Scarpa Typhoon, but with Dynafit compatibility.

To cap them off, all three boots will use the awesome Intuition Speed Pro liners, which, once heat-molded, offer the best fit and performance of any liner on the market. I like to call them burritos for your feet. 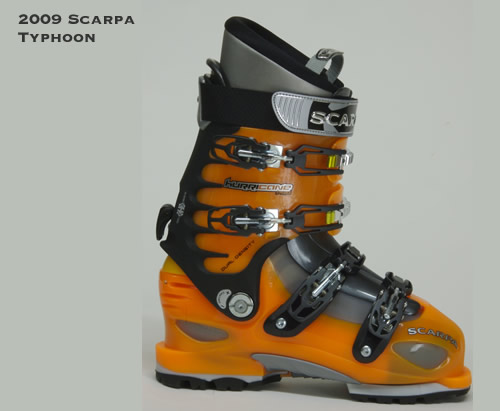 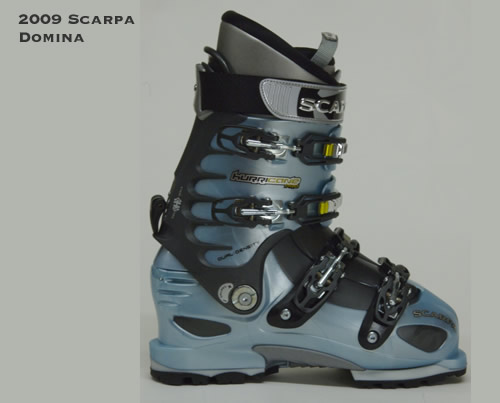 We’ll see if we can get some actual photos and more information on these boots at Outdoor Retailer Winter Market at the end of the month. For now, all I can say is they look super promising and the address some of the issues I had with the Tornado Pro’s. We’ll do our best to get on these boots for a full review soon.

More Info on the Scarpa Typhoon, Domina and Skookum Boots

Read the following press release for more info on these three upcoming boots from Scarpa:

Unleashing the most sophisticated combination yet of downhill performance in a touring- and mountaineering-friendly package, SCARPA North America will release two new hard-charging freeride boots for Fall 2008, the Typhoon and the women’s-specific Domina. In addition, SCARPA will also unveil the Skookum, a boot for big skis and big lines that’s also Dynafit compatible.

For sidecountry adventures or ski touring and mountaineering with the ultimate in control, these three boots set the bar in the freeride/alpine-touring category. They’re ideal for the skier that needs a super rigid boot for aggressive terrain yet wants the versatility to put it in walk mode for that quick boot up the ridge or the tour to reach a steep descent.

SHELLS: Built with 100 percent Pebax, the best material available for building lightweight ski boots that can retain their stiffness over the widest range of temperatures, the Typhoon, Domina and Skookum employ dual-injected V-Frame power-ribs on the cuffs for extraordinary rigidity. A walk/tour mode keeps things comfy when not in downhill mode. Four buckles and a power strap lock things down for the ride. These boots come with hinged tongues for touring as well as ski tongues that easily swap out for a 20 percent increase in boot stiffness. The Skookum adds tech fittings in the lower shell for Dynafit compatibility. It also comes with SCARPA’s booster power strap.

LINER: Intuition liners are the best thermo-moldable liners in the business, renowned for resistance to pack-out and warmth, which is why SCARPA boots come stock with them. The new SCARPA Intuition Speed Pro liners, used in the Typhoon, Domina and Skookum, are built with an alpine-style tongue, which allows SCARPA to increase their rigidity, translating to a stiffer overall boot design. Yet the way they are stiffened on the back of the cuff means they still have excellent range of motion when in walk mode. Liners come lasted for men’s and women’s feet respectively, and the thermo-molding process fine-tunes the fit.

SOLES: Notable because it’s the only DIN-standard rubberized sole on the market that can be skied in alpine or alpine-touring bindings without changing out any parts, the SCARPA/Vibram Ride sole comes standard on the Typhoon and Domina. This offers the maximum security in the widest range of binding interfaces with excellent traction for icy conditions. For those who prefer a burlier lugged mountaineering sole, the SCARPA Rally lugged sole can easily be added to either boot. The Skookum employs a touring friendly lugged sole.