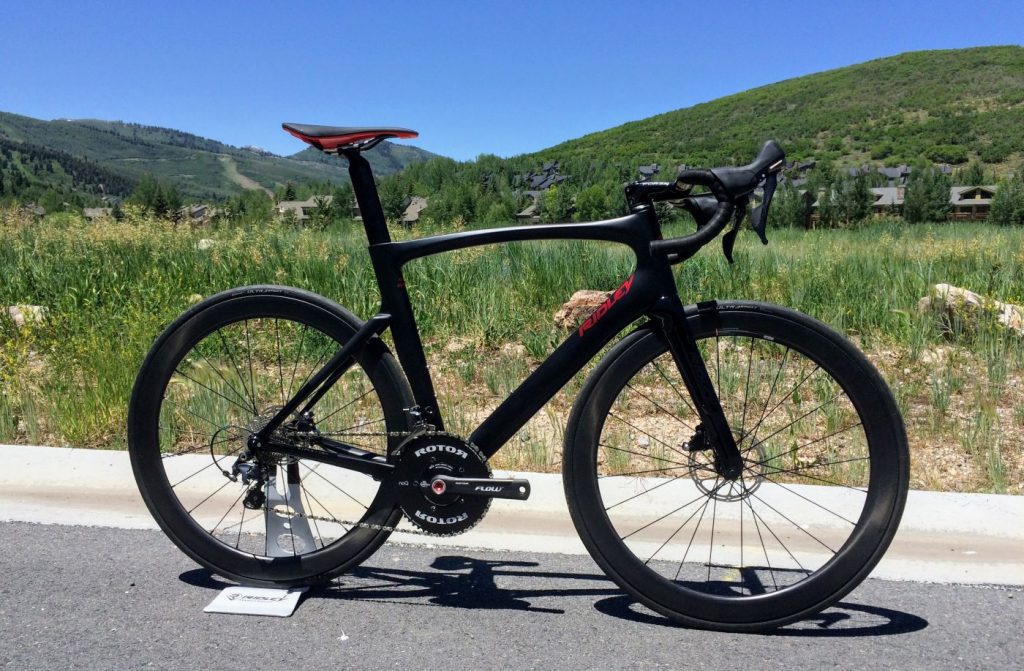 The Belgians arrived at PressCamp with nothing but disc brake bikes: the Noah SL Aero+ and Fenix SLX. The Noah SL Aero+ Disc is slippery and fast for long, rolling stages and the SLX Disc is a lighter weight version of the SL Disc introduced last year. Belgians remain tepid on road disc brakes for their own countrymen, but they see the US market as leading the disc brake charge and want to put their best foot forward as the technology becomes more mainstream. Something else I noticed for this year are muted, stylish color schemes that will take their bikes up a notch in visual appeal.

The Noah SL Disc was launched last year, but Ridley wanted to eke out as much aerodynamic performance as possible. To do that, they went for internally-routed cables from front-to-back. This is being accomplished by utilizing the new Forza cockpit and flat-section steerer tube that allows cables to be tucked inside.

Hopping into the wind tunnel, they noticed significant gains by removing the cables from the front-section of the frame and I might say it looks cleaner as well. But, running cables in that manner can be somewhat of a mechanic’s nightmare — hopefully they have figured things out. After significant wind tunnel tests, they found as much as 40% improvement in aerodynamics simply by removing the “cable spaghetti” from the front of the frame.

As mentioned, a key part of these gains is due to the new Forza Cirrus Pro integrated stem/bar system. Cables are tucked cleanly inside and I was told that even mechanical shifting will perform quite well when tucked inside.

Additionally, the Noah SL Aero+ features the F-Split Fork and F-Surface Plus on the down tube that’s said to reduce aerodynamic drag by 3-5% over frames without those features. Tire clearance remains a narrow 25mm and builds will be available with the new machine-woven Forza R45-19c wheelset.  An Ultegra mechanical complete build will be priced at €4,899 (US pricing TBA).

The Fenix SL is a staple in the Spring Classics and has been heralded by many as one of the best all-rounders that money can buy. Last year, Ridley introduced the Fenix SL Disc and this year, they are introducing the SLX Disc — dropping 300 grams from the frame to get it to 850 grams (size medium). As is usual, this is accomplished by using an optimized carbon layup schedule throughout the frame.

With dropped seat stays, the SLX is said to be Ridley’s most compliant frameset and it can also accommodate 30mm tires for added comfort and grip. And, the use of diamond-shaped tubes also increases stiffness and durability. This is not Ridley’s all-road bike (the X-Trail takes that one), but remains a race-worthy bike that will likely become more popular as disc brakes are re-introduced into the pro ranks.

Several build kits will be available starting with a value-packed Shimano Ultegra mechanical build for €4,299 and a the new Campagnolo Potenza groupset with Campagnolo Zonda db wheels for €5.799. Again, US pricing is TBA.