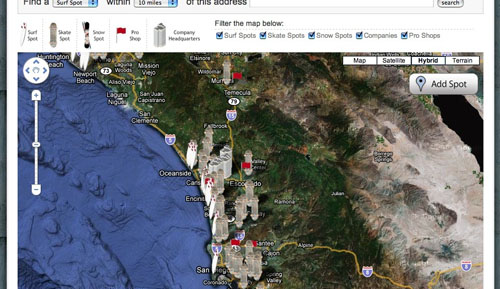 5Ones Earth: Share Your Snow, Skate and Surf Spots

After months of development, the crew over at 5Ones.com has launched 5Ones Earth–allowing everyone to submit their favorite snow, skate and surf spots including pro shops and company profiles. While many folks are reluctant to give up the “goods”, maybe the “pretty goods” will be exposed here?

I know I’m always reluctant to give up the super goodies, but what goes around comes around, right? You learned about it from someone at some point, so give it a chance. Utilizing Google Maps API, they have built the ability to browse on the map and plunk down your stashes for the world to see. See it here: 5Ones Earth.

Finally! That’s the first word that comes to mind while writing this announcement. After at least a good 6 months in development, we’re very excited to announce the launch of 5ones Earth, an interactive map for surf, skate and snow spots as well as action sports company headquarters and pro shops.

Along with the launch of Earth, we’re holding a two-week contest with thousands of dollars worth of giveaways in the form of gear from ERGO, IPATH, Fox, and Odeus Skateboards, and a $200 gift certificate from DogFunk.com. The contest works like this, you enter in new spots on the map and you’re awarded points for each one that enter. The people with the most points at the end of two-week, win the prizes. We put up a live leaderboard so everyone can track the contest results and it also explains the how the points are awarded. Skate, surf, and snow spots are worth 1 point each. A pro shop is worth 2 points each. And company headquarters are worth 3 points each.