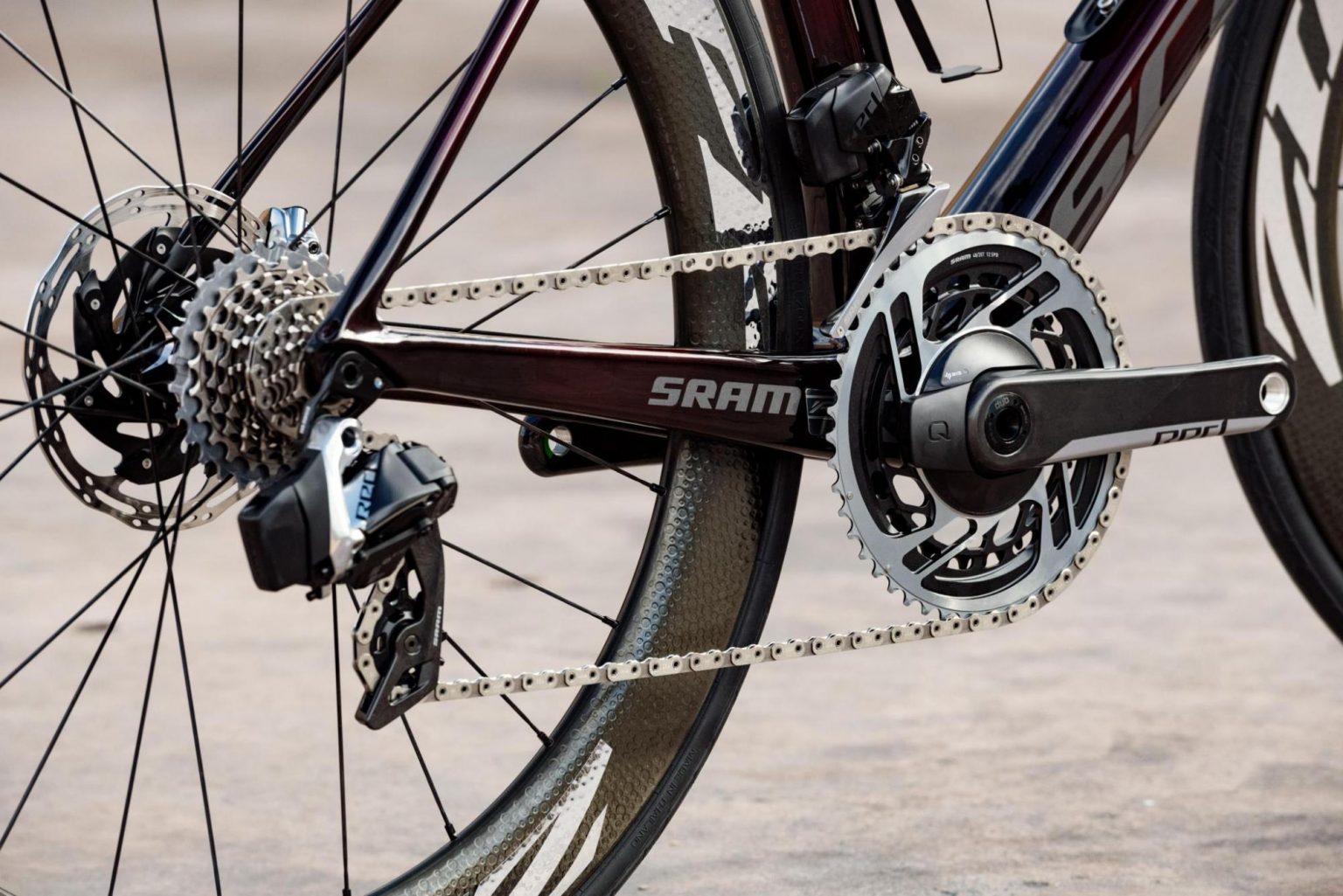 Break out the party hats and confetti poppers because SRAM just turned 12 gears old with their new Red eTap AXS and Eagle AXS drivetrains. SRAM isn’t new to the 12-speed game, their 1×12 Eagle MTB drivetrain has been slaying singletrack for 3 years now. And, MTB World Champion, Nino Schurter was running Eagle AXS prototypes for much of 2018.

On the road side, SRAM Red eTap AXS has been on test in the wild for at least a year. I personally saw this new drivetrain while visiting Quarq HQ in June 2018 (but wasn’t allowed to take photos). eTap AXS has been widely-photographed aboard SRAM-sponsored World Tour teams, but everyone has been mum… until now.

In a double release, SRAM is launching both Red and Eagle AXS drivetrains for all flavors of bikes — road, gravel and MTB. You can go straight 1×12 for MTB, roll 2×12 for road or something in the middle for your gravel rig. Anything is possible with the eTap AXS and it’s all done wirelessly.

WOOT! –> SRAM also dropped this little nugget — in April 2019, they will pull the wraps off SRAM Force eTap AXS. Certainly, Red eTap AXS will be amazing, but at $4158 for a full, power meter groupset ($3648 w/o power), it’s a stretch for many riders. Force eTap AXS should help, but we’ll have to wait and see by how much **fingers crossed**.

AXS is pronounced “Access,” and on the road side it means access to all roads and into gravel. Going 12-speed means that SRAM can be creative with their gear ratios, so you’ll notice that the old notion of standard, mid-compact and compact has now changed — and it means expanded gear ratios and more gears for all types of riding. What’s even more incredible is the amount of 1-tooth increments among all the cassettes. Riders looking to finesse that perfect cadence will appreciate what SRAM calls X-Range Gearing. You can see below what that represents across all three chainring variations.

That 10t cog is only possible by switching to a SRAM XDR driver and cassette. Most modern hubs should be XDR-compatible, but if not, Zipp will have your back with a number of compatible options. I’m told that all Zipp wheelsets made after 2012 are XDR-compatible. While your wheelset may be XDR-ready, the rest of the eTap AXS drivetrain is new and incompatible with even eTap HRD, with the exception of the batteries.

Throughout the new eTap AXS lineup, there are innovations and enhancements above and beyond the current generation of Red eTap. Every part has been re-designed to deliver the most performance available. We’re now talking ceramic pulleys, Orbit fluid-filled derailleur damper, Quarq DZero power meter integrated into the chainrings, faster shifting with more precise motors, oversized pulleys, completely re-designed guts of the shifters and derailleurs for improved brake feel, battery access and bleeding.

While there are concerns around a chainring-based power meter, SRAM has stated that their AXS chainrings offer 50% better wear-life compared to previous designs. That’s pretty impressive and will hopefully last longer than most people will own their bike.

Looking over the shifters, they appear nearly the same from the outside, but SRAM PR representative, Daniel Slusser added this when I questioned him further about them.

“External lever form factor and internal brake architecture are the same. That means you still have all the same brake lever adjustments and Blip ports as the older lever. But, every part is different. New lever body with easier to access battery, new lever blade construction method, updated brake internals that deliver a lighter lever feel with more braking power and modulation, new hood and shift paddle textures, new faster chipset… every part has been improved in one way or another.”

While we’ve seen SRAM Red eTap AXS on complete road-specific builds in the wild, one of the key features of the new AXS platform is its interoperability between both the road and MTB components. Some wild mix-and-match options are available for those who are looking for the ultimate in wireless 1x for today’s gravel bikes. And, on the MTB side a pure Eagle AXS build is possible with the Eagle AXS Controller telling the Eagle AXS Derailleur when to shift.

Rounding this out, SRAM will also offer the AXS mobile app with a variety of customizations including automatic shifting and such. We will soon get our hands on a full AXS test groupset for long-term testing — stay tuned.