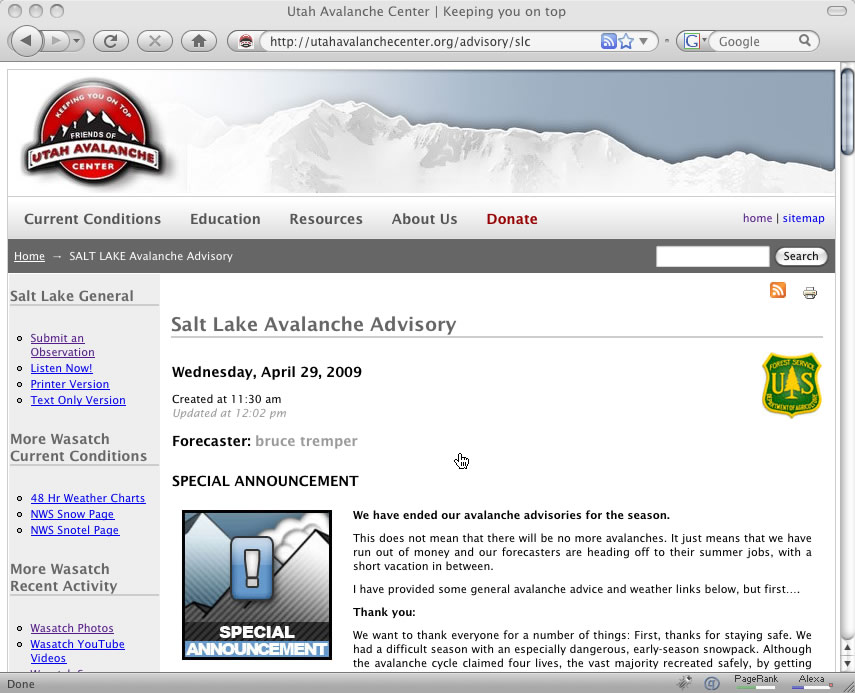 With the end of the ski season and all resorts but Snowbird shuttered, the Utah Avalanche Center is closing their operations for the season. What that means is you’re on your own for avalanche forecasting. While spring corn is always tempting, the weather’s indecision between winter and summer will wreak intermittent havoc on conditions. Here’s the contents of an email from UAC’s Bruce Tremper:

We have ended our avalanche advisories for the season

This does not mean that there will be no more avalanches. It just means that we have run out of money and our forecasters are heading off to their summer jobs, with a short vacation in between.

Thank you:
We want to thank everyone for a number of things: First, thanks for staying safe. We had a difficult season with an especially dangerous, early-season snowpack. Although the avalanche cycle claimed four lives, the vast majority recreated safely, by getting avalanche educated and by regularly consulting the advisory. Second, we would like to thank everyone for sending in observations. We are an under funded and overworked organization, so we certainly can’t be everywhere at once. The quality of the advisory depends directly on the amount of feedback from the community. Each day, 10-20 of you would send us observations and photos. This kind of community support is what motivates to wake up at 3:00 am and work lots of unpaid overtime.

Thanks for Funding Support:

Thanks to everyone who financially contributed this season. We had an unexpected budget cut this season and several valued partners stepped up to the plate to keep us from cutting back services. Namely, the non-profit group, Friends of the Utah Avalanche Center, raises private funds for avalanche forecasting and education in Utah. For the first time, private funding represented our largest funding source. Because of your financial support the FUAC contributed around $118,000 to avalanche forecasting and education in Utah. A big thanks to the Unified Fire Authority, who filled in a big chunk of our funding gap. Finally, the Forest Service Recreation Fees program filled in the last of our funding gap. Of course, we could not do this without our regular, longtime, funding partners, which include: Utah State Parks, Utah Public Safety, Salt Lake County and the city of Sandy. Of course, this is a Forest Service program and about a fifth of our funding comes from a yearly, regional earmark and we thank Doug Abromeit, Liz Close and our boss, Larry Lucas for their unfailing support. We are co-located with the National Weather Service, who provide office space and unsurpassed, weather forecasting skill, infrastructure and the regular company of dozens of very smart people, who are essential in making our forecasts better and more accurate. Last, but not least, thanks to all the businesses and individuals who donated, especially Black Diamond, Backcountry.com and the generous ski resorts who donated hundreds of lift passes, the sales of which directly benefited the FUAC. We will have a more complete list in our upcoming Annual Report (sometime in May).

We are trying to raise funds for continued web site development over the summer. If you wish to contribute to the cause, you can donate to the Friends of the UAC.

My darling, little, 92-year-old mother-in-law from the Czech Republic lives with us and she said the other day, “Spring is always a fight between winter and summer.” Each spring, we see a series of cold, winter storms with cold powder and the requisite dry, slab avalanches. In between storms, warm temperature and strong sun instantly turns all the new snow into wet, mashed potatoes, which can come slurping down the steep mountainsides in a hurry as wet sluffs and sometimes wet slabs. Because of these rapidly alternating extremes, it can make avalanche stability assessment especially tricky. Even if we continued our avalanche advisories through May it wouldn’t help much because spring conditions vary dramatically not only from one place to another but from one minute to the next. So your only choice is to carefully evaluate snow stability as you travel. Here are some general tips:

With each snowstorm, we need to worry about the usual round of storm-snow instabilities, namely wind slabs and instabilities within the new snow. Wind slabs are especially easy to recognize because they are smooth, rounded, hollow-sounding and often feel “slabby”, meaning that you can feel strong snow on top with weaker, softer snow underneath. You should always avoid these recent deposits of wind drifted snow on slopes approaching 35 degrees or steeper.

Even out of wind-affected areas, new snow can have buried weak layers deposited by rapidly-changing storm conditions. These weak layers most commonly include graupel, (looks like little Styrofoam balls) or a lower density layer in the new snow. Finally, high precipitation rates during the storm can cause instant soft slabs within the new snow because it is being loaded up with weight faster than it can adjust to its load. You can easily test for these instabilities by jumping on small, test slopes or quickly digging down with your hand and pull on small blocks that you isolate.

We live in a desert, after all. So between storms we almost always get sun and this time of year, we also get very warm temperatures, which mean nearly instant damp or wet avalanches. Everyone knows that if you want powder snow in spring, you need to get it quick, because it has a very short shelf life. Once the sun and warm temperatures start to cook everything down, new snow can loose its internal strength very quickly and it starts to produce point-release, damp or wet sluffs, which can fan out to very large areas and pile concrete-like debris into very deep piles. Occasionally, wet slabs occur, which can produce very large and dangerous avalanches. Also, each spring we always see “glide” avalanches, which occur when the entire season’s snowpack slides slowly on steep rock slabs or grassy slopes like a glacier until they catastrophically release as a very large avalanche. These occur during especially warm weather and they can release any time, day or night. So you should always avoid traveling on or below steep rock slabs, especially in notorious glide avalanche areas such Stairs Gulch, Broad’s Fork and the steep slabs in Cardiff Fork.

Once we get a few days of warm weather with freezing each night, the snow turns into much more stable corn snow, which many backcountry skiers and boarders love because it’s flat and grippy, like a groomer at a ski area. The key with corn is to get on it just after the sun softens it up enough to get an edge into it and get off of it before it gets too mushy. If you’re punching through, leaving deep ruts or sinking in past your ankles when walking on foot, it’s time to change to a shadier aspect or head home. Besides, it’s considered to be bad form to leave deep ruts in the snow, which ruins it for others who will be there the next morning. The name of the game is to get out early and get home early.

Finally, with the exception of Snowbird, all the ski areas are closed for the season and no one is doing any avalanche control. Practice normal backcountry safe-travel protocol even within the closed ski resorts.

I will be around until around the end of May working on the annual report and trying to raise funds for further development on our web site for the summer. I still want to know about avalanche activity so we can keep track of it on our database.

Fill out the observation form on our home page at www.UtahAvalancheCenter.org