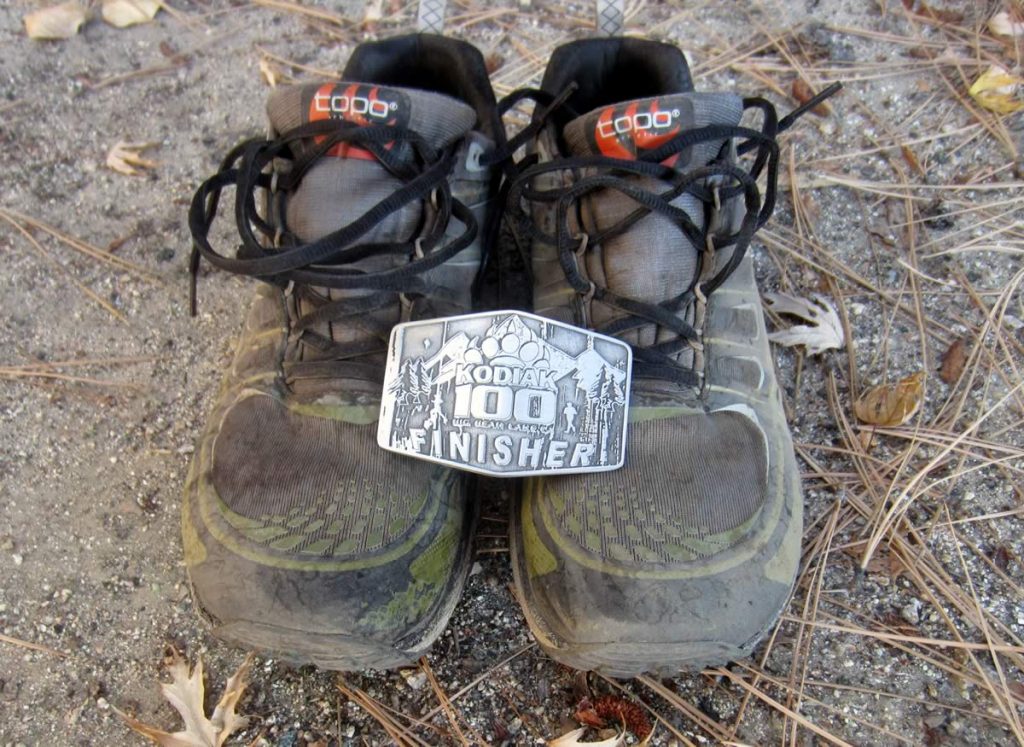 Most ultrarunners have a gear hierarchy that goes like this: there’s “Regular Gear,” then “Go-To Gear” … and then there’s “100-Mile Gear.”

As the name implies, 100-mile gear is the stuff that will carry you through 100 miles on the trail; through a full day and night, in a variety of often extreme conditions.  The tricky part is, sometimes your favorite gear lets you down in one way or another when you finally get to race day – so you never really know if your go-to gear is actually 100-mile gear until you put it to the test.

I had an opportunity to identify my 100-mile gear this September at the Kodiak 100 in Big Bear, CA, a rugged, rocky trail run with 17,500’ of climbing that takes place almost entirely at elevations between 7000’ and 9000’.  I spent 28 hours on the trail, and came away with a well-defined short list of items I’ll reach for the next time I’m ready to take on 100 miles.

It’s Got to Be the Shoes! 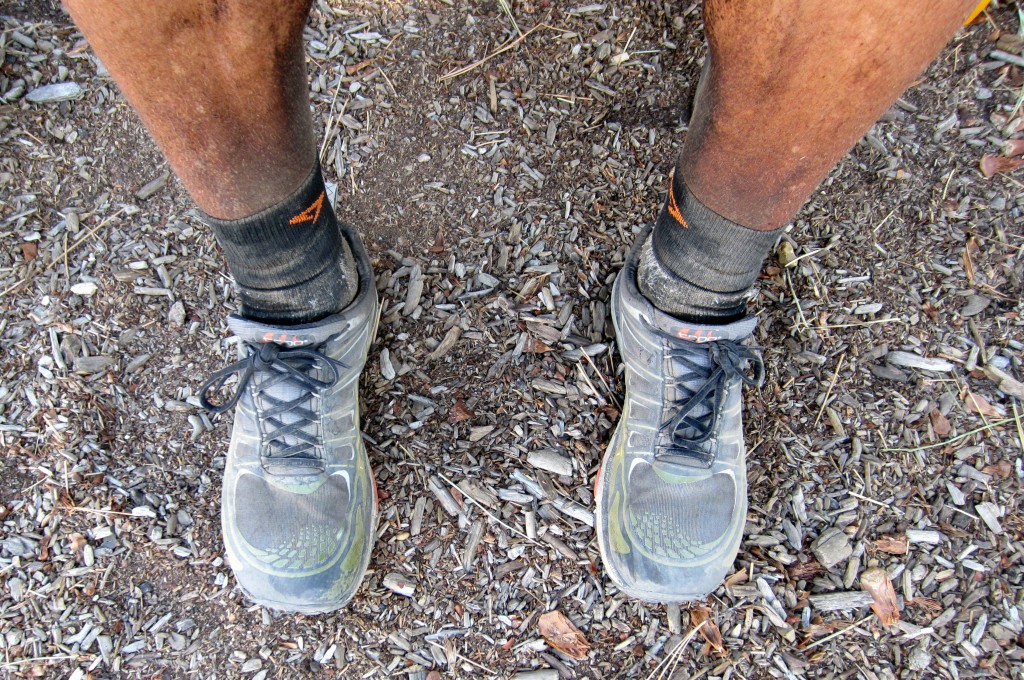 Obviously, the most important decision for an event like this is shoes; there’s nothing that can inflict more misery or derail your race more dramatically than having shoe problems on race day.  My choice for this run was the Topo Runventure, a shoe that has been on the market for just under a year now.  I first tested it during a very hilly, ridiculously muddy and sloppy 50-miler in Marin County CA last December, and it performed beautifully in the muck.  However, there’s a difference between an effective mud shoe and one that performs well on highly technical rocky terrain, so I was curious to see how the Runventure would meet the challenge.

I should preface this by saying I’m a fan of Topo Athletic and their approach to modern athletic footwear.  The company was founded by Tony Post (hence the ToPo name), the former CEO of Vibram USA who left that company at the crest of the minimalist wave a few years ago.  His vision for Topo was to combine the core values of minimalism – lightweight and flexible materials, anatomic foot shape, and a relatively flat platform – with modern shoe construction that allows high performance for high intensity or long duration activity.  Their footwear line includes models that are specific to road running and cross-training in addition to the trail-specific Runventure.

The Runventure features a rugged outsole made of breathable tear-resistant mesh, with bumper protection around the peripheral toe box.  It has a 2mm heel to toe drop with stack heights of 19mm in the heel and 17mm in the forefoot.  The outsole has 4mm rubber lugs for secure traction and grip, and there’s a thin, flexible TPU midsole rock plate to disperse sharp impact forces.  The shoe is highly flexible from heel to toe, and the entire thing weighs in at a mere 8.9 oz.

During my race, I worked the heck out of these shoes, and they performed brilliantly.  Although I scuffed them into countless rocks and fallen branches, the uppers stayed intact.  Through the rockiest sections of the race, they protected me from significant discomfort.  And best of all, the anatomic toe box allowed my toes to spread apart naturally and avoid rubbing against each other, even when my feet got swollen in the later stages of the race.

Another piece of equipment that made the leap from go-to gear to 100-mile gear was the UltrAspire Zygos pack, a 2L hydration pack that provides an additional 7L of cargo space, in a large assortment of pockets on the front, back and sides.  The rear pocket is large enough for jackets, headlamps, gloves, hats, and extra food, while the side zipper pockets are easy to access on the go and are large enough for a camera, smartphone, maps, or small clothing (hats or gloves).  I also love having a lot of items at my disposal in the front of a hydration pack, and the Zygos delivers with two roomy mesh pockets, a waterproof pill pocket, and a small zippered trash pocket.

One design innovation on the Zygos that I was slow to warm up to is the Max O2 sternum system that replaces traditional sternum buckles with bungee elastic clasps.  The elastic is ideal for expanding and contracting with your rib cage while you breathe, and keeping the front of the vest very secure against the body.  However, the lower clasp is difficult to access underneath the mesh pocket, and I found that I had to double-loop the elastic cords to get my ideal amount of tension – otherwise the attachments were simply too loose and mobile.  You also lose the obvious location for a drink tube clasp, and the Zygos’s clasp location on the left vest strap sits too high up; it’s tricky to access easily, and sometimes even rubbed against the lower part of my neck while running.  I don’t know if the Zygos will be my permanent 100-mile pack, but for this race it definitely earned its stripes for the task.

The apparel I wore for the entire race was the Patagonia Long Haul shirt, and the Merrell Resister shorts.  My socks were Drymax Regular Trail socks, and I went the entire race without any changes of socks or shoes.  I also wore a Suunto Ambit2 for the entire 28 hours (recording at 1 second intervals), recharging it on the go with a Goal Zero Flip 10 charger midway through the race.

During the night I wore the Salomon S-Lab Hybrid Jacket, a 4-oz waterproof breathable shell with a hood and long elastic hem to help with insulation in the cold mountain air.  I also made it through the entire night with Petzl’s updated NAO headlamp, which received a healthy upgrade this year in both brightness and burn time.  The economy setting throws off 290 lumens for at least 12.5 hours, and the Petzl reactive lighting system ensures that you have the right amount of light whether you’re looking down at your feet or farther down the trail.

Other incidental gear that I used for the race included:

Overall I was super pleased with the choices of gear, and in hindsight there isn’t anything on the above list that I would have traded for a similar product.  That’s not to say the items above are the best choice for you; rather, it’s an indication that after all the training miles it takes to line up for a 100-miler, you should have a pretty good idea of what’s going to work.  Then all it takes is to get through the race, and suddenly you’ve got a collection of 100-Mile Gear of your own.

What items would you take on a 100 miler?