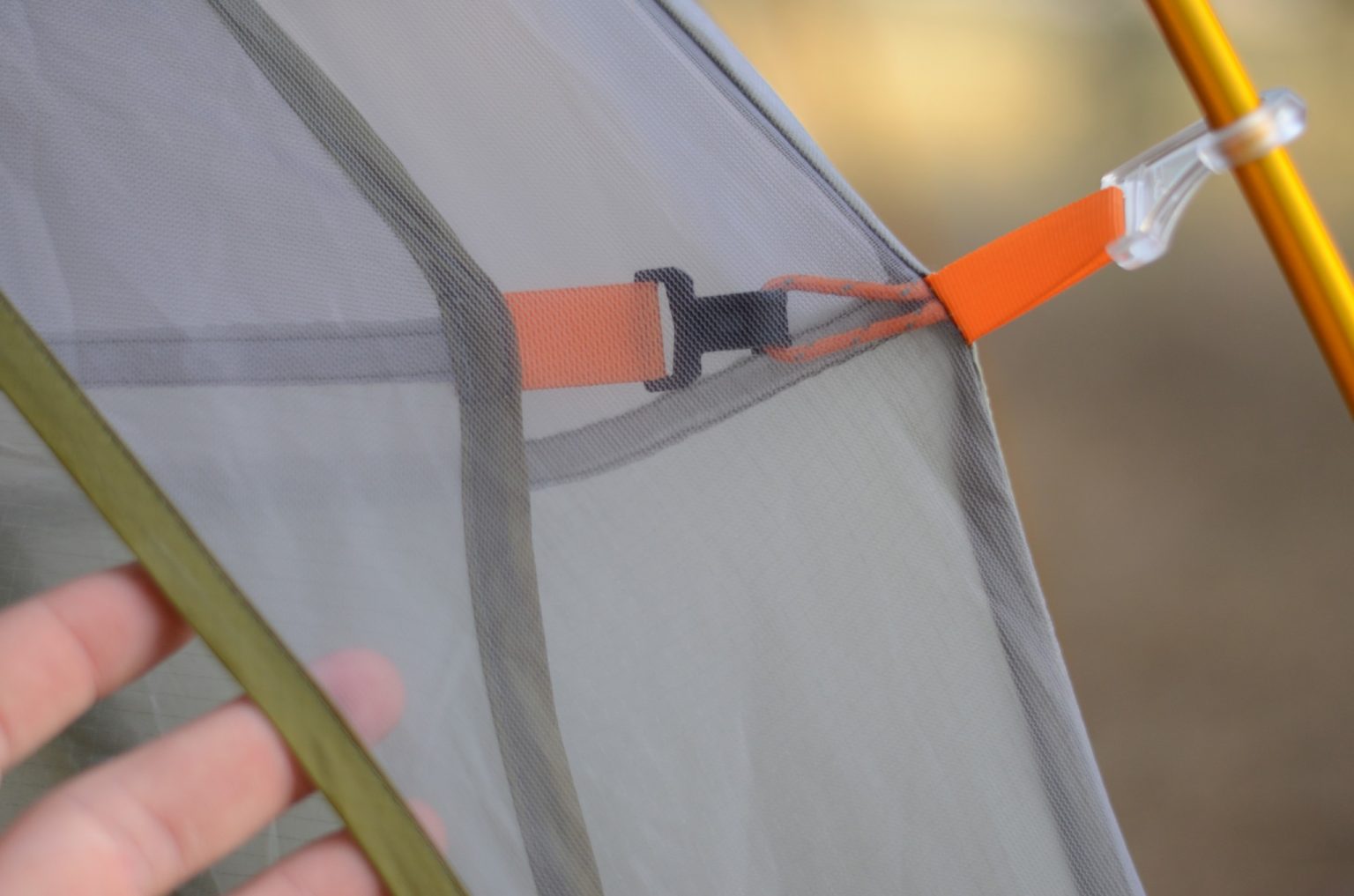 You know you’ve been there before: you saw your tentmate downing a Nalgene right before bed and all of that hydration needs to go somewhere.  With a noisy ZZZZZZIIIIIIIIPPPPP, they rip open the zippers and head out into the woods to go pee.  By now you’re fully awake and you think to yourself – surely there’s a better way.  Eventually you drift back to sleep and have a marvelous dream about a new ultralight tent that didn’t have a single zipper.  In your dream, the tent was called the Fishhook UL 2 and it was made by a little company called Big Agnes. 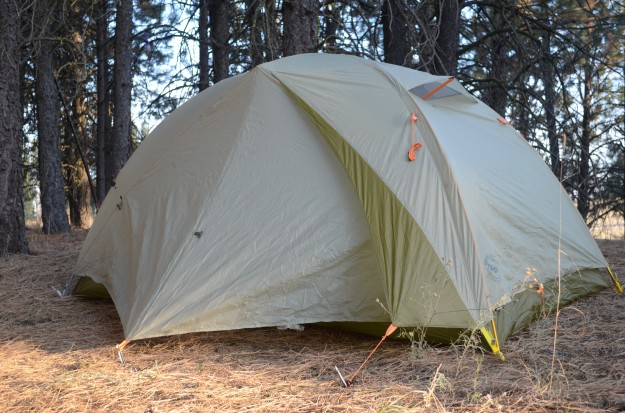 Ditch the zip with a Fishhook

The traditional dome design, though, simple, seems to offer an infinite number of variations.  Big Agnes has taken this well-loved design and given it quite an edge with new cutting-edge features.  The floor has 37 square feet of space and the vestibule offers and additional nine square feet of storage.  When it comes to weight, the Fishhook is competitive but it’s no record crusher: our last two-man ultralight tent, the MSR Nook, clocks in at just 3lb 8oz but shaves off around a square foot of interior space; similarly, the Sierra Designs Mojo 2 cuts off a foot and a half of interior space but the weight drops all the way down to 3lbs 2oz.  The Fishhook UL 2 isn’t the lightest tent that we’ve seen recently and it’s still small by the standards of two-person tents, but it’s in a pretty competitive class.

Big Agnes call themselves the Mother of Comfort, so livability is always a key component in their tents.  Supplementing the simple dome design is a two-section spreader bar that lifts the sides of the tent up and away from the occupants.  Overall, it’s a stellar little design: DAC’s pressfit pole connections make it a snap to set up by yourself and the spreader bar does a fantastic job at making the tent feel airy.  For that matter, Big Agnes made sure to color coordinate all of the pole endings and fly attachment points, which is such a sweet feature.  It makes setup a foolproof breeze.  What’s more, the fly attaches to the tent body via clips rather than grommets, so they don’t slip out when you’re setting it up alone.  DAC’s little twist clip creations are present on the tent, and I must say I’m beginning to appreciate them more – with a little practice you can clip them on 0ne-handed, leaving your other hand free to do things like signal for help or ward off a bear.  It’s a big deal.

The Fishhook features a generous bathtub floor with a full slate of taped corners and seams.  There’s a panel of nylon which reaches halfway up the tent wall until it meets the polyester No-See-Um mesh that finishes off the rest of the tent.  The polyester mesh was a bit of an odd choice to me – it doesn’t have the same fine texture as nylon and, generally speaking, it’s not as durable either.  Presumably Big Agnes included the polyester to keep the tent in a more accessible price point, so I’m alright with the compromise.

One of my favorite aspects of the tent is the sheer amount of storage that it offers.  There are big, fat triangular pockets at each corner of the tent and the center top there are four little slots for odds and ends.  Honestly, I’ve never seen a tent with this much built-in storage and organization potential.  Sadly this isn’t the type of thing that gets hyped a lot, but Big Agnes nailed it: best-in-class storage for the Fishhook UL2. 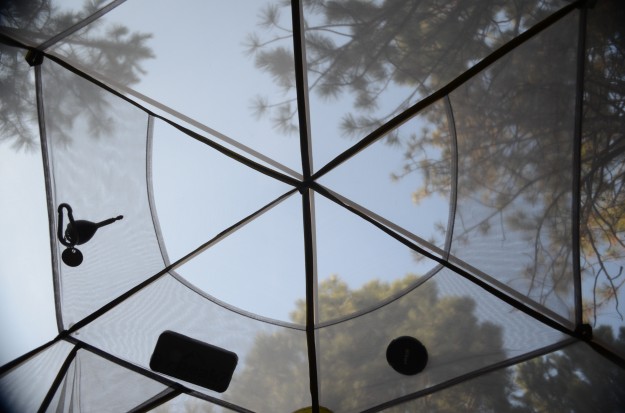 Now for the zipperlessness of the tent itself.  A zipper has the advantage of becoming part of the structure of the tent – it can play a part in how a well-designed tent is tensioned.  Big Agnes didn’t have that luxury when designing the Fishhook so they had to take very special care to integrate a free-hanging door into the wall of their tent.  The result is, overall, quite impressive.

The door attaches to the tent body via three different hooks, one of which buries itself deep in a mesh ‘storm flap’ to ward off mosquito entry.  The bottom of the door has a flap reminiscent of a snow skirt to provide extra protection against pesky bugs. I have to say that the Fishhook did well while I was backpacking in areas with moderate mosquito populations but, when I went into the flying hoards of Okanogan, I chose to leave the tent at home.  It’s a good design for mild to moderate bug populations, but it would quickly be breached during a mosquito hatch or something like what Okanogan offers in the summertime.

Overall, I like the design: it’s quick and simple to shut the door.  What really proves the worth of the design, though, is that I barely have to think about the door and how unique it is when I use it — it simply works.  My only change would be providing a bigger webbing loop on the upper closure for quicker sealing. 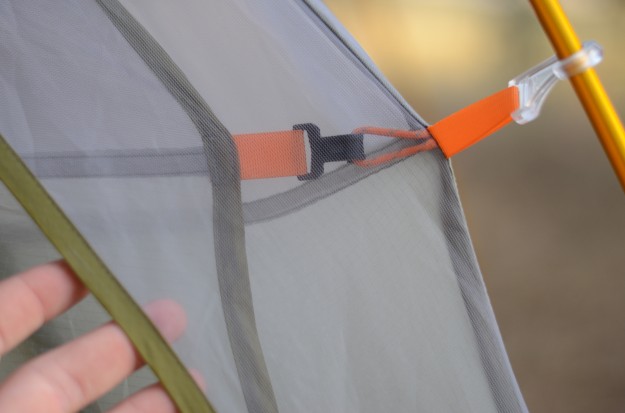 The fly also lacks a zipper and I daresay this is the one that tested Big Agnes’ creativity the most.  How do you make a weatherproof fly without a zipper?  Their answer is simple – a big fat storm flap.  The vestibule door attaches to the tent via a color-coded clip and an two twist clips onto the frame.  The main vestibule gets staked out and then there’s a secondary storm flap that, when guyed out nice and taut, extends over the vestibule door’s attachment point and protects it from rain and wind.  As you can imagine, this system has its limits: the design holds up well to any rain levels, but if there’s any wind then the design has the potential to turn into a neat little wind tunnel.  The gear I stashed in the vestibule never got soaked, but this design definitely has more potential for the elements to get in than traditional zips.

There are frogeye vents on each side of the Fishhook, so it’s never wanting for ventilation. That, coupled with the fact that much of the tent body is polyester mesh, ensured that I never really had to fuss with condensation inside the tent.  It’s almost always easy to get some solid crossbreezes going through the tent, even though there’s just the one door that can’t be zipped open to vent like most tents.  In this light it becomes evident that those frogeye vents are definitely integral pieces of the fly – way to be, BA.

The Fishhook is definitely a bit of a quirky addition to the competitive world of ultralight tents – honestly, I really enjoyed using it.  It strikes me, though, that this is a tent for people who are very familiar with where they’re going and are confident that neither mosquitoes nor wind will overwhelm the Fishhook’s capabilities.  I really loved using it with a partner (even though there’s just one door) and it definitely gave me lots to brag about with my buddies.  The Fishhook is a simple concept that became reality thanks to a team of very talented designers, and that attention to design is what ultimately proves its worth in the field; a few uses is more than enough to prove it.