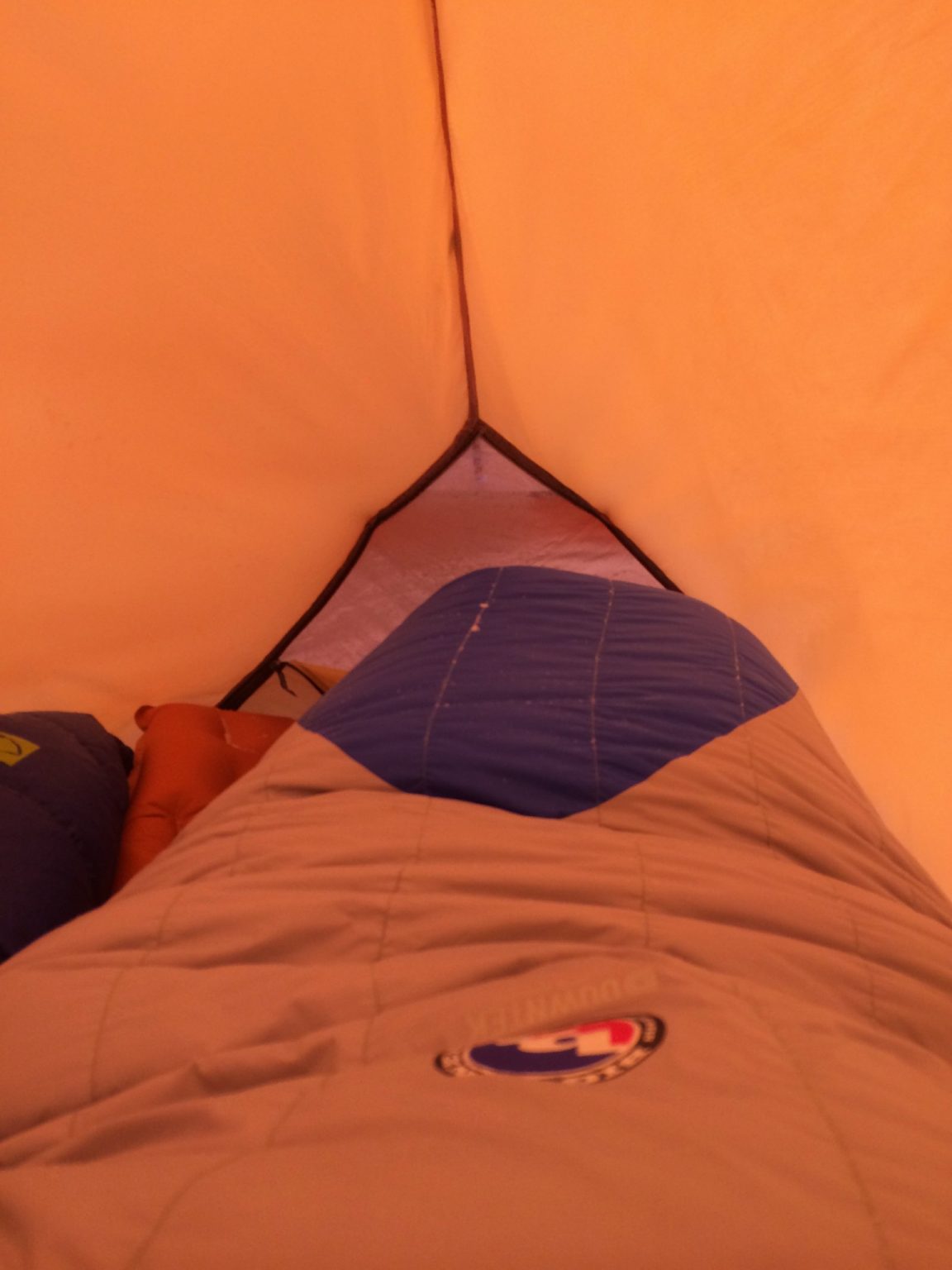 This is an awful photo, but there's ice and condensation all over the outside of the bag.
Gear Reviews

There’s been just one sleeping bag keeping me warm through the long Spokane winter. While I can’t justify owning my own expedition weight bag, many three season bags are simply too insubstantial to cope with the demands of a cold sleeper on a cold night. Enter the McAlpin SL 5 from the good folks over at Big Agnes.

Three-season bag… except when it’s not

Before every review I do of a Big Agnes down product, it seems as if I must stop and pay heed to their venerable design heritage. While they’re a fairly young company, Big Agnes left their mark on the outdoor world with their unique approach to designing sleeping products: oddly, they consider what it will be like for someone to use their stuff. The hyperbole here is evident, but the McAlpin SL 5 is chalk-full of touches bearing Big Agnes’ special mark. We’ll dive into the sleeping bag’s relative weight, highlight some of its design elements and then get nitty-gritty with field reports.

When it comes down to it, ‘SL’ really doesn’t fit the McAlpin SL all that well. It’s plugged with 28oz of down, but there’s no doubt that the 700-fill power contributes a bit of heftiness that wouldn’t be there with higher fills. At 2lbz 15oz, the McAlpin is just a hair under three pounds flat, putting it at the heavy end of most five degree bags.

Case number one: the Sierra Designs Cal 6 is an 800-fill, 2lb 5oz featherweight that also features vertical baffles. Or, another option, the 800-fill Mountain Hardwear Phantom 0 clocks in at 2lb 9oz but sticks with horizontal baffles. The trend essentially continues down a long slate of cold-weather bags, but the McAlpin can’t exactly be blamed. Big Agnes is one of very few manufacturers offering bags in 700-fill because it enables them to offer the McAlpin at a very reasonable price; in contrast, both of the bags I’ve listed here would run at least $200 above the MSRP of the McAlpin.

Now for the bag itself. As with most of Big Agnes’ products, there is a strong focus on user experience; in all sleeping bags, this concern is most significant in the head region. It’s imperative that the face area be comfortable and warm, otherwise I stay up half the night bothered by trivial discomforts. Big Agnes designed the McAlpin with a fat, two-lobed draft collar that settles down on the collarbone like the beautiful cushy pillow that it is. There’s a pretty utilitarian hood adjustment which would benefit from having differentiated strands — that is, two different textures for the face opening and collar adjustment.

My other quibble is that the face opening shock cord tends to dig into the face when it’s tightened up (there should be more padding or a design alteration here). There is a bit of a ‘visor’ of down but it isn’t effective in cushioning the shock cord. This sounds like a bigger problem then it actually is – overall, the mummy-style hood and overall facial area are very comfortable.

Further down the bag, one finds an excellent anti-snag zipper track.  See how the word ‘excellent’ is italicized? That means that I really mean it.  I’m actually quite comfortable calling the McAlpin’s zipper track the easiest-pulling zipper that I’ve ever seen on a sleeping bag. This is accomplished, in part, by the rather large gauge of the zipper and the enormous pulling head — but whatever.  It pulls really well. The drapht tube (spelled with a ‘ph’ to underline how puffy it is) has thickened fabric on the zipper side to virtually eliminate any potential snagging — overall, an excellent system.  Inside of the bag are fabric loops to secure a liner — I have a pretty generic REI fleece liner that worked well inside of the McAlpin. One absent feature which really ought to be represented in a sleeping bag is some type of sleeping pad interface, whether that’s straps or a fabric sleeve.

Moving beyond the basic features, the core of Big Agnes’ sleeping bag design is their Insotec Flow vertical baffles coupled with the 700-fill Downtek hydrophobic goose down. My most recent experiences with vertical baffles came from Big Agnes’ own Shovelhead down jacket; the Shovelhead made big waves because it was BA’s first article of clothing — however, the McAlpin has all the same technology that backed up the Shovelhead’s excellent field performance. The idea behind vertical baffles is that the insulation more closely matches the body’s natural heat patterns – we’re long critters and heat distributes itself more effectively when it’s allowed to travel the length of our body. Big Agnes sewed ‘Flow Gates’ into the baffle to keep all of the down from pooling at your feet while still allowing heat to travel unimpeded. Older horizontal baffle designs were good because you could shift down inside of the baffle to where you needed it — that’s gone with the vertical baffle.

It’s one thing to talk about all of the advantages that vertical baffles are supposed to bring and quite another to test it in the real world.  I spent a little extra time (well, three months) with this bag to really get a feel of its capabilities — I was impressed, to say the least. My coldest testing trip came on an snowshoe-clad climb in epic -20F weather. My tests confirmed a few things that I already knew about vertical baffles, but I was surprised by some of the things I learned. For one thing, I already knew that vertical baffles distribute heat more evenly — that wasn’t a big surprise and it’s backed up by basic principals of the way energy moves in a medium.

On the other hand, I was really surprised to find that vertical baffles seem to hold heat longer. I usually go to bed on a pumping metabolism, but that doesn’t last until dawn and I wake up cold in the mornings if I don’t have a snack at 3am. However, even in temperatures far outside of the 5F comfort range (I supplemented it with a fleece liner and warm baselayers) the McAlpin still had tons of heat trapped in the loft of the down come morning. Obviously these are all qualitative observations, but I am pretty confident in saying that Big Agnes’ Insotec Flow vertical baffle design holds heat longer than traditional horizontal baffle designs.

Other than the baffle design, I was really pleased with the performance of the bag in wet conditions. Big Agnes doesn’t have specific information on the nylon weave used in the McAlpin but I’m pretty sure that it’s 20D, placing it on the more durable end of the sleeping bag spectrum. The nylon is coated with a DWR and this, coupled with the robust weave, launches the McAlpin into the top-tier of 3-season moisture management. On one testing trip my partner and I encountered unusually high condensation levels inside of our String Ridge four season tent; as ice formed on the tent wall, the toe box of the sleeping bag rubbed up against thousands of ice crystals with my every move.

Come morning the outside of the bag had fended off virtually all of the excess moisture. On warmer days when the condensation would have spent more time in the liquid phase, I would confidently expect the McAlpin to maintain its loft all the way through the night. 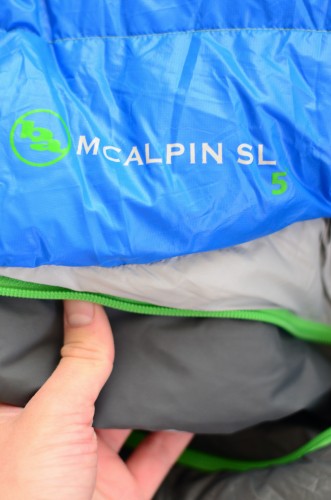 Big Agnes continues to prove that they have one of the most thoughtful design teams in the industry. The McAlpin SL 5 is a delicate balance of features, functionality and cost-effective 700-fill down. Frankly I’d love to see them release an 800-fill iteration, but that would include a hefty jump in price. Regardless, the McAlpin has withstood rigorous testing and it left me happy and warm in the mornings.