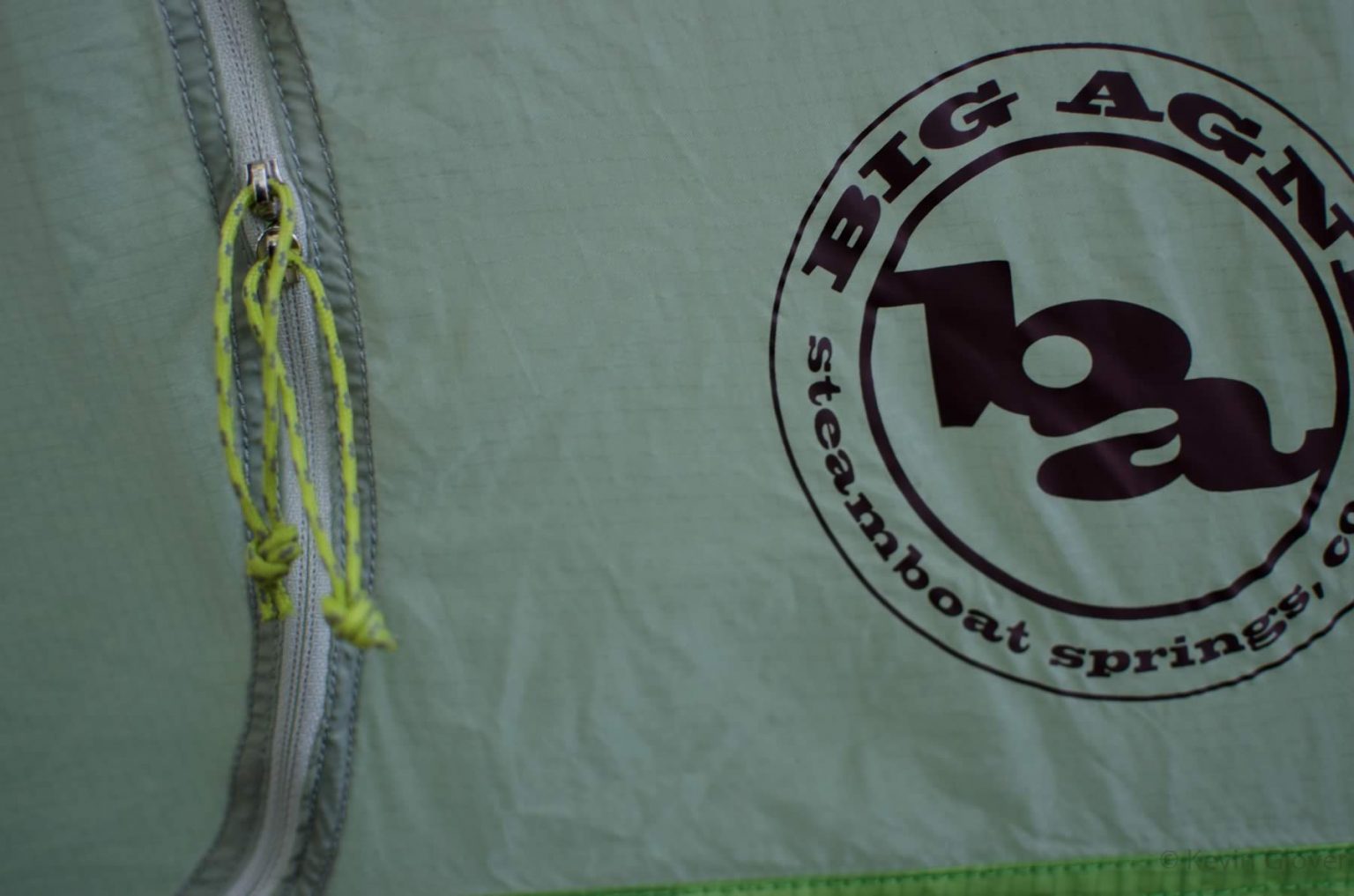 If you were to set up any of the new mtnGLO tents from Big Agnes, I can almost guarantee that you wouldn’t notice any difference between it and any comparable tent from a major brand. The same light fabrics, the same techy DAC poles and thoughtful design that we expect to see from quality backpacking tents is here, and in many ways these are still the most important parts of a tent. But, if you were to look up at the ceiling of the Rattlesnake SL2, you’d notice a tiny black box – and that’s where it all starts. 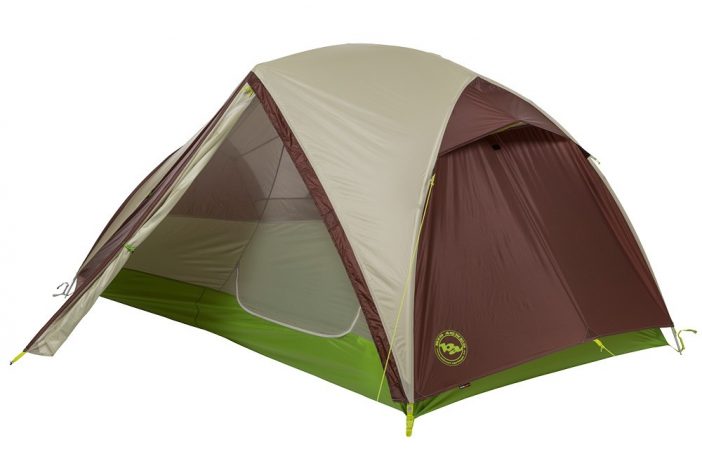 Has Big Agnes seen the light?

I realize that I am in great danger of participating in the huge array of puns that have been directed towards the new mtnGLO tents since they were unveiled. I’ll do my best throughout this review, but one or two may slip through. In any case, what we’re really here to talk about is a stellar backpacking tent that just happens to have a string of LED lights running along part of its stitching. I’ll go through the tent like I would any other tent, and then treat the mtnGLO technology at the end.

The Rattlesnake SL2 builds off of a trusted design platform that Big Agnes has successfully used numerous times in the past. A DAC center pole stretches along the tent, before branching into Y’s at each end via plastic hubs. That long center pole is reinforced by a crosspole that pulls the walls especially taught. You’ll be relying on the inherent strength of that design entirely, too, since Big Agnes didn’t include any structural guy-out points from the fly. Unfortunately I wasn’t able to test this tent in any really significant wind, but based off of my experience with other tents of similar design I would be cautious putting this one up against gusts beyond the high 30’s or so. Why? Well, a lot of the features that make this a great tent to live in also make it a target for wind.

And what, you ask, are some of those great features? The most noticeable one is fact that the tent has steeply sloping walls. They’re almost vertical, which is a very desirable trait. It maximizes actual interior space, so what you’re getting from square footage translates into more actual living space. That’s great in almost all circumstances, but take note that it means you’ll be getting broadsided if there’s any appreciable wind.

That aside, let’s look at a few specs. The tent boasts 27 square feet of interior space and a peak height of 40″. Both of these are respectable measurements for the class, and they’re nicely accented by those vertical walls that I mentioned. What’s the practical upshot of these traits? Well, I tossed around the term ‘livable’ quite a bit – what makes a tent livable? It’s things like this: good interior space, a high ceiling, pleasant coloring, etc. The coloring on the tent is a nice balance between earth tone and neutral – a mostly grey fly and dark brown vestibules makes for a pleasant change from the eccentric colors of many modern tents. It results in nice morning light filtering through the tent, which is a major plus when you’re waking up in it day after day.

As a matter of fact, those two particular stats (the peak height and the interior space) aren’t actually that impressive within such a competitive class. However, in some some ways the Rattlesnake doesn’t need to have, say, such a high peak height (other tents can be four inches taller) because its walls are so near to vertical. Similarly, 27 square feet interior space is fine, but the Rattlesnake also boasts 9 square feet of gear storage in the vestibule. So, all in the all the Rattlesnake isn’t breaking any records here, but it’s a very pleasantly livable tent.

The tent’s other features are carefully selected for backpackers. There are two largish D doors that each open and close via a fairly delicate gauge zipper – be careful to keep it clean – and allow for quick pee exits in the night without disturbing your partner. The zipper pulls (and accents on the fly) are reflective, so you’ll be able to see the tent at night of mtnGLO isn’t lighting your way home. Meanwhile, the height of the mesh paneling decreases as you travel towards the foot of the tent, providing a good mix between privacy and visibility. The actual foot of the tent is taken up by a full mesh window, which is pleasant. And, of course, there’s a full bathtub floor and all of the relevant seams are taped and sealed.

Although talking about the tent’s normal features is certainly illuminating, I know why you’re all really here – mtnGLO. Yes, it was big news and I’ve been drooling over the press material that’s been coming my way ever since it was first released. The Rattlesnake is the first tent I’ve had the chance to test that integrates the system, and so I had some high expectations. The upshot? mtnGLO is understated. I view this as a good thing, but let me explain. All of the advertisements that I’ve seen of mtnGLO tents features long exposure photography that greatly enhances the brightness of the LED lights. You’d think that you have miniature football stadium lighting in your tent based off of the advertisements alone.

The actual product is more subdued, and correspondingly much more helpful, than that. First, brightness: the system has two intensity settings and they’re both actually quite dim. Youngsters like me can read a book by its light, but not without some serious squinting. Frankly, I’d prefer to read by a headlamp because the system is just too dim.

However, mtnGLO proves its worth in other ways. For example, it makes finding gear a breeze. If this were to be integrated into a four season tent, it would be an absolutely killer aid in having fast, streamlined alpine starts. Imagine being able to pop on lights (which would help wake climbers up) and then quickly be able to see all of the gear you need. That would be awesome. Another absolutely brilliant application? Having something like mtnGLO during an extended storm (ie, when you’re huddled up in the tent during the daylight hours) could add immeasurably to morale.

All things considered, though, this ‘understated’ theme plays itself out in even better ways. Case in point: you can’t even tell that the system is there. The LED lights are so fine that they roll up imperceptibly within the tent, and all that’s left is the (admittedly somewhat clunky) battery box. No, I didn’t especially notice that either as I packed the tent. What I won’t get into too much, though, is weight comparisons: yes, the system adds some weight. You’re taking a penalty to be able to have the convenience of ambient lighting in the tent.

Going into this review, I was wondering if the Big Agnes tents sporting mtnGLO would be substandard tents featuring a dazzling new technology. If the Rattlesnake is representative of the rest of the line, that is patently not the case. The Rattlesnake stacks up well against not only other BA tents, but also offerings from major competitors. So, the mtnGLO technology is not so much a selling point as an appropriate capstone to an otherwise worthy tent. Is it worth the slight but undeniable weight penalty? That’s for you to decide.