Is brightness the be-all, end-all?  In some cases yes, in others … maybe not.  When you’re throwing off 200 lumens from your head in the middle of a long, tiring night, there’s a strong argument to be made that brightness is king.

The previous iteration of Black Diamond’s Icon headlamp was my go-to lamp for running through the night, and accompanied me at several ultramarathons over the past few years.  So when a new Icon was released while I was training for another 100-miler last summer, I was eager to put the lamp through some paces.

I was expecting some minor upgrades to the Icon – but what I didn’t expect was the complete redesign that Black Diamond came up with for the 2012 Icon.  And when I experienced firsthand just how bright the new Icon is, I knew I’d never have visibility issues at night again. 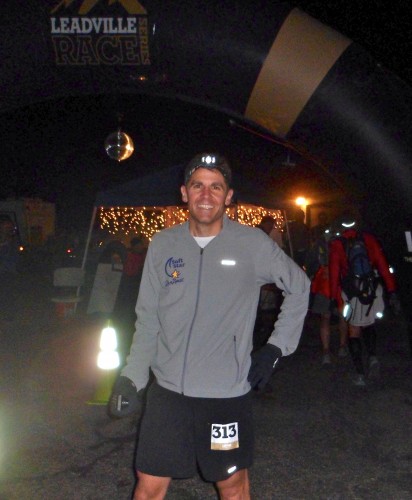 Sometime around 2AM, somewhere near Leadville

Black Diamond literally doubled down on the brightness of the Icon, going from a max of 100 lumens on the previous model to 200 lumens on the new one.  The beam distance is roughly the same, meaning that you can’t see farther down the trail than before … but everything you see within that beam is illuminated twice as well as it used to be.  There isn’t a root or rock that will sneak up on you – and when you’re dead tired with 30 more miles to run, that’s a nice feeling.

But here’s the downside: all that brightness has to come from somewhere.  The 2012 Icon adds one AA battery to the power supply of the previous model, resulting in a larger battery pack and heavier overall weight – 220g on the new model vs 187g on the old one.  There’s a thin rubber padding on the inside of the battery pack to provide comfort against your head, but after several hours the increased weight will definitely make your neck ache a little more noticeably than the old Icon did.  Black Diamond makes a Polar Icon that is essentially the same lamp with a detachable battery pack and soft carrying case to keep the battery compartment stowed inside your jacket or at your waist – and for only an extra 10 dollars, this model is probably worth the extra cost for multi-hour use.

Besides brightness, another area where Black Diamond shines (see what I did there?) is in ease of use.  The 2012 Icon is completely operable with a single button on top of the lamp that is large enough to use with gloved fingers.  Bulb mode, red/white selection, brightness, strobe, and locking the batteries … all of it is handled very simply with the multi-use button.  You can also activate the red bulbs without cycling through the white settings, which is ideal if you’re trying to preserve your night vision.

However, one limitation to ease of use is that although the 2012 Icon accommodates rechargeable batteries, as of this writing there isn’t a rechargeable pack option like the previous model offered (the NRG pack).  I prefer lamps you can plug into the wall or computer instead of swapping out batteries, so the new Icon makes it slightly more difficult to be green.

With a supercharged brightness upgrade, Black Diamond’s 2012 Icon headlamp delivers unparalleled brightness – but the added weight and bulk may present too much of a comfort tradeoff for some users.