A rugged cell phone eh? One you can toss in your pack or pocket on your next backcountry ski trip and never worry about destroying. One that your kids can drop in the bathtub and still make it out alive. One that can withstand a drop to the dirt, rocks or cement and still show the happy signs of solid 4-bar coverage.

Cell phones are a necessity these days–even in the backcountry. I know, some of the purists will shun me for saying this. Now I don’t mean to say it’s OK to blab to your best buddy for hours in the backcountry, but I feel more comfortable knowing that I’ve got cell coverage just in case of an emergency. And, in the case of an emergency, the Casio G’zOne rugged cell phone just might be the ticket.

Built to pass military standards, the Casio G’zOne is shock, scratch, dust and water resistant (tested to 30 minutes at 1 meter depth). It is also resistant to humidity, salt, fog and solar radiation. Not that I know what solar radiation is, but I guess it’s the nemesis of most under performing cell phones. Goodness knows I would never take a pricey Apple iPhone with me on a Colorado River trip, unless I had purchased insurance on it. But the Casio G’zOne, with all its durability, could prove to be a trusted partner that you wouldn’t have to worry about–no matter where your adventures take you.

Recently, I got the chance to test out the new Casio G’zOne Type-S cell phone to see how it would withstand the rigors of being banished to a hydration pack and generally abused. I let my daughter run around with it, chew on it and drop it at will. I fully immersed it in running water and generally did stuff that I wouldn’t do with my own cell phone. The thing kept on humming without so much as a blink. 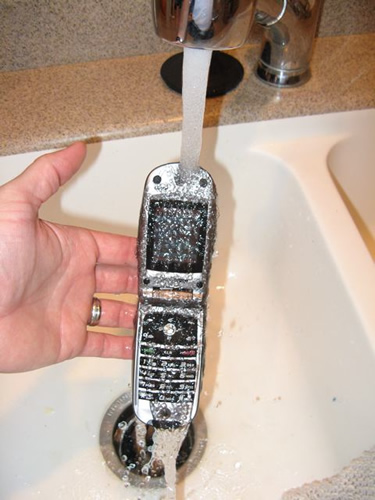 I’m no cell phone expert, but the voice quality seemed good and the overall menu structure and navigation seemed intuitive enough to learn without a manual. The rubberized dialpad provided just the right feel when dialing numbers and navigating the menus. The circular exterior display is clear and large as compared with most other phones I’ve seen. Photographs taken from the phone were clear and crisp–not that it will be replacing your Nikon D40.

The phone is a bit larger than most current flip phones (probably the only major negative aspect of this phone), but they’ve got to do something to absorb the shock and stave off the elements, so the case is pretty burly. The durable plastic shell feels nice in hand and really gives you the confidence that the phone isn’t going to break into a million pieces should you drop it to the ground. There’s even a large d-ring so you can attach a lanyard or carabiner to keep it from falling out of your pack or pocket.

Some other notable features of the Casio G’zOne cell phone include:

If you’re looking for a durable cell phone that can go anywhere you go and work anywhere you work, the Casio G’zOne Type-S is the ticket. No more worries about dropping it into the drink, or having it break into a million tiny pieces when dropped to the ground. Looks like a great phone for outdoor enthusiasts who don’t want to worry about their cell phone in the backcountry.

To purchase other Verizon phones or plans, visit LetsTalk.com.