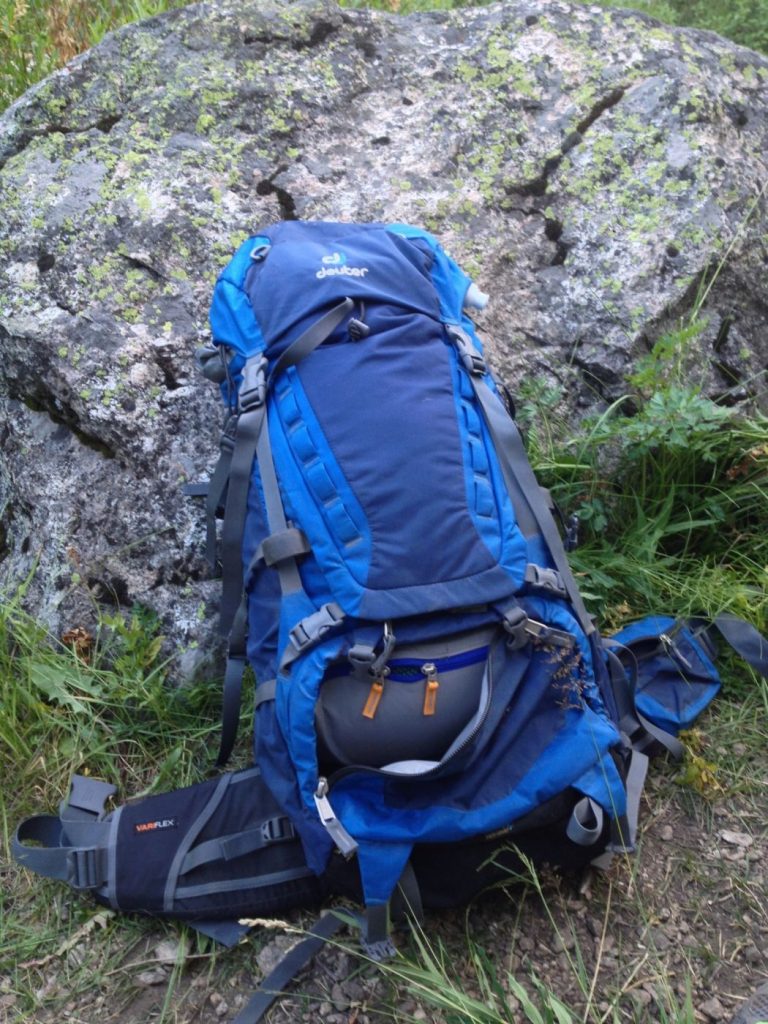 German outdoor haus Deuter isn’t as big of a name in the US as, say, Gregory or Osprey, but they’ve been making solid products since 1898.  No big deal.  Those 115 years of experience have gone into the Deuter Aircontact 65+10 backpack and I’ve been thoroughly enjoying the pack amongst the beautiful Ruby Mountains, which have been around some 64 million years longer than Deuter.  The Rubies and the Aircontact have quite a bit in common, as it would happen — both are rugged and designed to last, though I think the Rubies will probably win out in the long run. 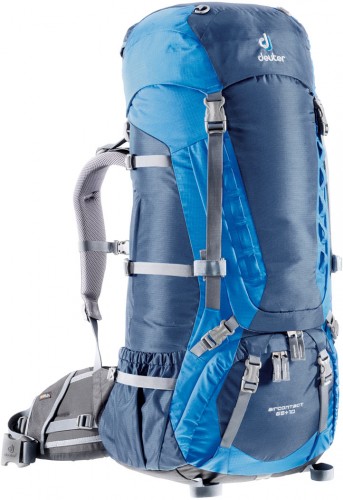 The Deuter is one of those products that wears their heart on their sleeve; a simple visual inspection will quickly reveal exactly what this pack is designed for.  The zippers are strong and robust; the pockets are plentiful and thoughtfully organized; the pack is a hefty 6 pounds.  What does this all add up to?  A backpack for the serious, no-nonsense trekker who knows that an extra pound or two of pack translates to comfort at the end of the day.  The Deuter is constructed out of very heavy fabric and absolutely tremendous zippers, bucking the trend of lightweight ‘disposable’ products that the industry seems to favor right now – this is the sort of pack that you could hand to your grandson after it received years of use from both you and your son.  That may be a bit of hyperbole, but it’s darned durable.

Deuter’s Aircontact design was conceptualized as a high-carry pack with tons of features to spare.  Organization comes from a pack lid featuring two pockets, a map pocket, one hip belt pocket and a 10L bottom sleeping bag compartment.  The Deuter is designed to be loaded from the top, which has two drawstrings for different pack loads; trail access is provided by a full-size front zippered opening on the front of the pack.  There’s also a plethora of gear loops and a very thoughtful array of load compression straps; while we’re on straps, it should be said that there’s virtually no creep on any of the Deuter’s straps.  The designers chose a fairly rough webbing which brooks no unwanted movement, though at times it’s difficult to make fine adjustments.  The main hip belt features doubled back webbing on the forward-pull system, which I actually found very difficult to loosen up without having to horse on it with two hands. 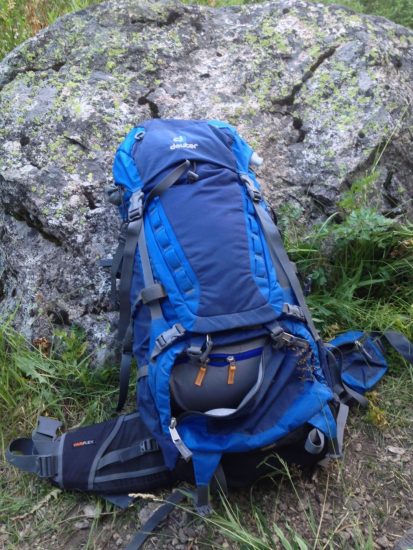 This pack’s carrying capacity is truly tremendous – the lid of the pack is expandable and one could easily fit a solid 20L of stuff sacked gear underneath the lid.  I don’t particularly care about having that dedicated sleeping bag compartment, though I do appreciate how the dividing fabric is easily removed through a quick pull of the zipper, should I want to just have one large compartment.  The twin water bottle pockets are big enough to accommodate 1L Nalgenes without much difficulty when the pack is loaded, making for a pleasant relief from some of the other systems we’ve seen lately.

When you get out and use the pack, Deuter’s design chutzpah translates into clear rewards on the trail.  The Vari-Quick suspension system allows for a finely-tuned fit in a matter of seconds; plus, Deuter included two different attachment points for the load tensioner straps so that any size torso will find the Deuter to be a killer fit.  To test this out, during my lengthy three-month review period I lent the pack to two friends of incredibly different body types – one is rather short at around 5’6″ and is an absolute bundle of muscle; the other is of average height, but is all torso and no legs.  I’m pretty intermediate, but my two friends were able to push the Deuter to each extreme.  Both reported that they were able to adjust the Vari-Quick system on their own to achieve a great fit, and then went on to enjoy awesome treks under the Deuter.

Using the Deuter on the trail is enjoyable due to the plush suspension and padding – I’ve rarely seen a heftier waist belt than what the Aircontact is equipped with; Deuter used soft foam on the inside of the belt and layered it with anatomically molded firmer foam, providing structure and support.  Indeed, the hip belt carried my heaviest load (around 56 pounds) with aplomb and I daresay the Deuter could carry as much weight as the strongest backpacker might demand.  My only quibble is that the waist belt is doesn’t tighten enough to fit smaller frames.  I’m 5’11” and weigh 186 pounds, but I’ve got wider hips than most – I was just able to tighten the hip belt enough to carry loads well, and I know that people with smaller frames would not be able to tighten the belt enough.  Indeed, my shorter friend has a very small frame and, when he carried the pack, he remarked that he had a hard time keeping the hip belt tight enough.  The load stabilizer straps do something to mitigate this by keeping the bottom of the pack well against your body, but there’s no making up for a loose hip belt.

On a similar note, the sternum strap has an elasticized region to absorb shock in technical situations.  That’s great, but that elastic region is bordered by thick stitching and an extra loop of webbing, so the buckle can’t slide over that area; in practice, I found that I couldn’t tighten the sternum strap as much as I wanted to as the day wore on.

The various load compression straps do a fantastic job of keeping the pack in a tight bundle, something that’s absolutely crucial when you’re carrying a big, heavy pack over technical terrain.  The fins of the hip belt are designed to pivot so that the pack stays with you well during tricky maneuvers, but I’m afraid to say that I found the pack rather stiff when I needed it to move with me.  It’s tricky to balance the ability of supporting heavy loads with the ability of moving well with a human body, and the Deuter definitely leans more towards the supportive side. 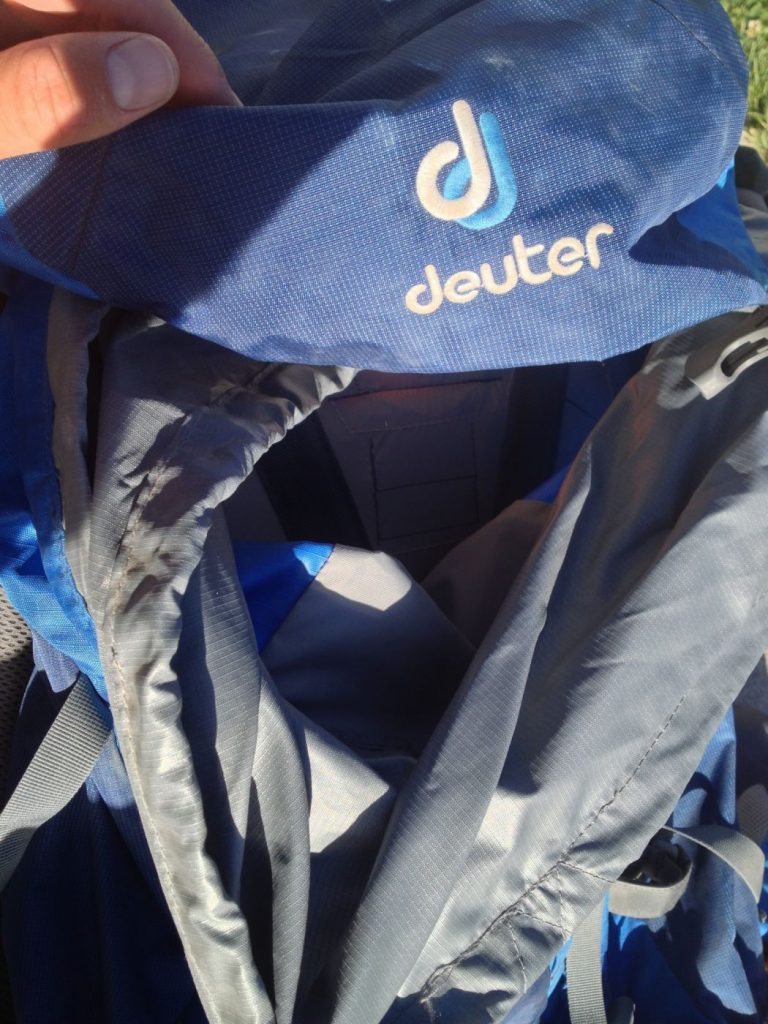 One of the Deuter’s biggest claims to fame is its namesake Aircontact system.  This design features hefty foam pads that are designed to create air channels between the pack and your back, allowing air to flow as the day heats up.  While using the pack I gratefully noted the occasional breath of cool air over my back, so I’d say the system works quite well.  The crucial thing, though, is that the pack doesn’t compromise lumbar support and overall comfort to provide this cooling effect.

Reading back over the review, I’d say that the list of good points speaks for itself; we usually have much shorter lists of pros but the Deuter just has so many good things going for it.  I do wish that the hip belt and sternum strap were built with smaller people in mind, but I love the Vari-Quick system and the clever addition of extra attachment points for the load tensioner straps.  There’s not a tremendous amount of internal organization possibilities, but the plentiful gear attachment points on the pack provide some consolation.  On the whole, I’d say that the Deuter Aircontact is one of very few packs on the market designed to carry heavy loads comfortably while performing well through years of use.