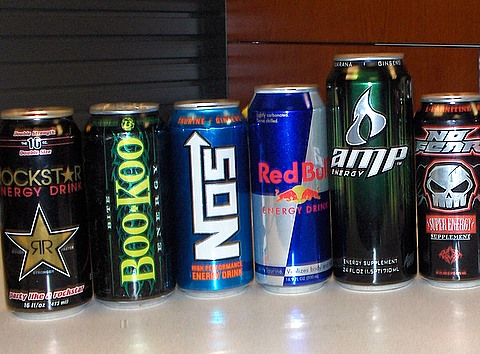 Energy Drinks… Do You Really Drink Them?

I was reading on the local news about a John’s Hopkins study on the affects of energy drinks and the high amounts of caffeine they contain. The findings were truly alarming and got me thinking more about these “energy in a can” drinks. Do they help? Are they dangerous if consumed in excess? What about all the young kids drinking them?

My personal belief is that you should not be addicted to any substance–whether that be nicotine, caffeine, drugs or chocolate for that matter. Addictions come in many forms, but the increased addiction to caffeine because of energy drinks is, in my mind, alarming–especially since 1/3 of all energy drink consumption is from teenagers.

With hundreds of energy drinks on the market, there’s no regulation on the caffeine content, which can vary between 50-505 mg. The problem is that the caffeine is the point of the drink. That alone contributes to the “buzz” and extra “energy” you receive from its consumption. For comparison, you can expect about 160 mg of caffeine per 8 oz. of Starbucks drip coffee–still quite a bit.

As a result of all this energy drink consumption, many teenagers are becoming increasingly-addicted to these highly-caffeinated beverages, which can lead to alcohol or drug abuse.  Yes, that whole much-debated gateway drug effect that applies to cigarettes and marijuana as well. I know it’s a slippery slope, but it’s got some merit.

I stated above that I don’t believe anyone should be addicted to any chemical or substance. The human body performs best when its well taken care of. Natural, whole foods and healthy drinks (ahem… water) should be the staple of any athlete’s diet, not caffeine-packed “energy drinks”.

I’ve made that choice for myself and truly believe that to be the optimal energy drink for my body. Having been addicted to caffeine previously, it’s a hard habit to break and the withdrawals are awful. That alone makes me never want to consume caffeine again–especially in high quantities like those found in Redline, Spike Shooter and the like.

While mountain biking, skiing and participating in other outdoor sports, I prefer to keep myself naturally hydrated with vitamins and minerals (I use nuun tablets) and then supplement that with high-energy natural foods and energy bars that don’t have caffeine. It really surprises me how many of the new energy gels have caffeine in them also. I can’t do it… gives me the jitters.

Check out www.EnergyFiend.com for details on the caffeine content of many popular drinks.

Does anyone else see energy drink consumption a potential problem, or am I the only one? Chime in below…