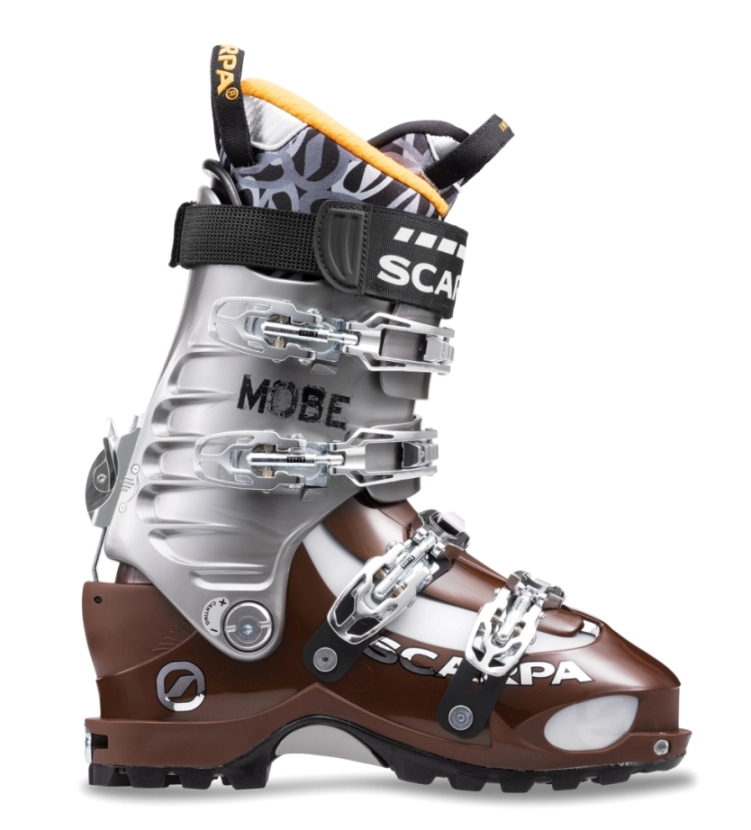 Freeride AT Ski Boots from Scarpa and Salomon for Fall 2010

On the burly end of the spectrum (see my report on lightweight AT boots), ski boot manufacturers continue to either evolve their freeride AT boots or are entering the market for the first time. Lange introduced the walkable Super Blaster, but this year Salomon is going beyond a simple “walk mode” and going into the AT market. Here are a couple of new boots unveiled at this year’s Outdoor Retailer show.

Tucked in the back corner of the Salomon booth was a little-known product release for the backcountry skiing crowd–Salomon’s first backcountry ski boots. The new Quest boot line features all the downhill goodness Salomon is known for, all wrapped in a touring-friendly design.

While these aren’t for long-range backcountry ski tours, they are for hard-charging inbounds and out in all conditions. For my type of skiing, these may just be the single boot to rule them all. Yeah, they are going to be a little heavier than dedicated touring boots, but if you ski both front side and backside and only have the funds for a single boot, these will likely be a safe choice for overall performance.

I slipped into the Quest Pebax Pro (shown below) for a walkabout and I must say I’m impressed with the fit and power of these boots. The walk mode is surprisingly capable and the overall fit is nice and comfy (101mm last). These compete directly with the Black Diamond Factor boot and will find homes in mountain towns all across the Rockies. With Salomon’s solid ski boot reputation and distribution, they will be a force to be reckoned with, for sure.

Prices are TBA and availability will be Fall 2010 at a ski shop near you. 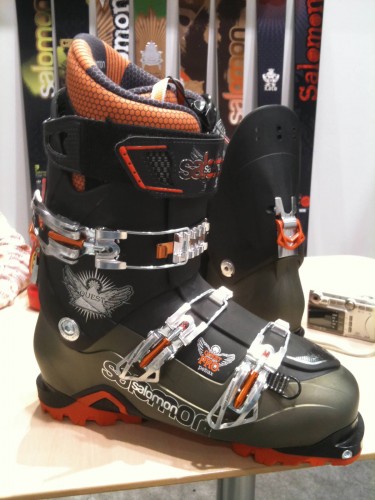 Coming in at a respectable 7 lbs 14 oz, the new Scarpa Mobe (mo-bay) freeride AT ski boot builds on the popular and solid Skookum boot with the new Powerblock Tour mechanism. What this does is mimic the performance of a fixed-cuff boot design as closely as possible yet still offers excellent walking capability. Another cool feature are the spring-like metal bands holding the buckles on the lowers. When open, they are kept away from the tongue so they don’t interfere with entry/exit and closure of the tongue.

This is a burly 4-buckle boot for hard-charging inbounds or in the backcountry. I like that they don’t offer DIN blocks here (to go full alpine, you can select the Hurricane, which gets a walk mode for Fall 2010) because the reality is that you will likely never swap them out–in spite of what the marketing hype says. As usual, the Intuition liner is standard for a glove-like fit.

The Scarpa Mobe will be for those who either want a single boot and ski Marker Duke or Fritschi Freeride bindings or for those who charge hard in the backcountry and want no-compromise kicks.

Look for these boots this Fall. They will cost you $759. 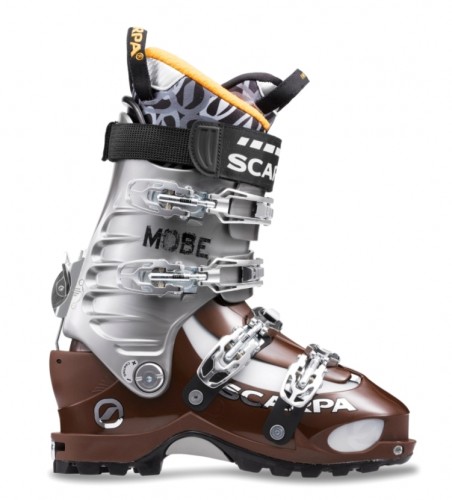