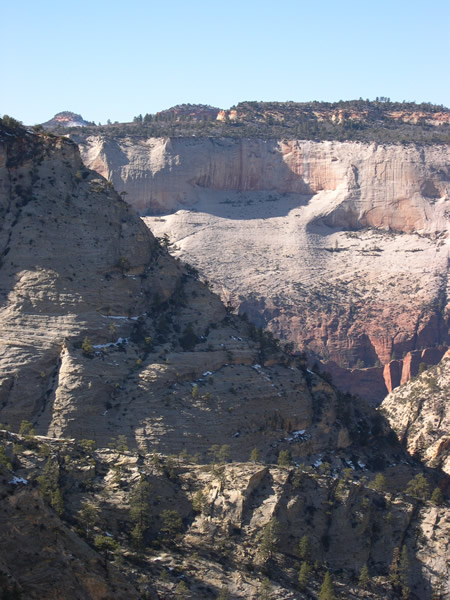 Come summertime, the only way in and out of Zion Canyon is by shuttle bus. Luckily, the buses run frequently, so you don’t ever have to wait too long. One of the best benefits of the buses in the summer is that the canyon seems much less crowded. You can even ride your bike up and down the canyon and the courteous bus drivers will graciously pass–unlike the days when thousands of cars would park on either side of the road, leaving a narrow, two-lane road only navigable by Geo Metros.

Ah, but we were venturing to Zion in the winter. The winter is an entirely different story. The shuttle buses are all parked in a lot and the gates are open for all vehicles. The nice thing is that vehicles are few and far between during the winter months.

Since the winter snowpack in Northern Utah has been so thin this year, nothing sounded more refreshing than a nice hike through the desert and 65-degree temperatures. We figured we might as well take advantage of the warm winter somehow, because there sure wasn’t any powder in sight. 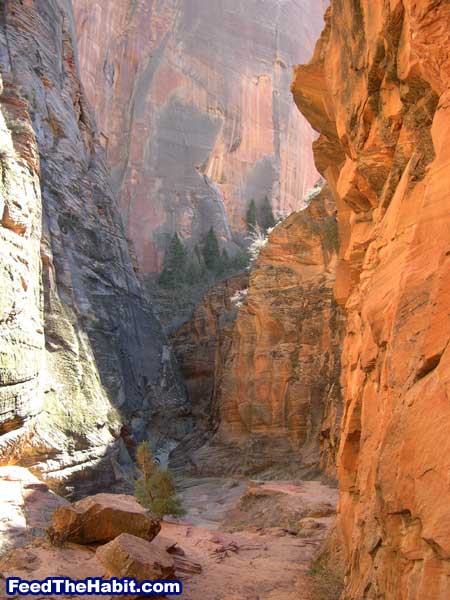 We set out to hike the East Rim Trail from the East Entrance to the park, then down into Zion Canyon near Weeping Rock. The trail is about 13 miles with a total vertical ascent of 1500 feet. and a descent of nearly 2800 feet. Honestly, it’s the descent that kills you.

The trail begins through scattered pines and scrub oak with a mixture of sand, clay and sandstone. All around are these rolling rounded canyons that look like giant checkerboards with a crisscross square pattern. The geology here is amazing.

After a long, slow climb, the trail begins to switchback and steepen as it climbs to the East Rim Plateau overlooking Zion Canyon. As we approached the higher altitudes, the sandy trail gave way to the stickiest, wettest clay ever–typical of Utah–with intermittent snow patches. Soon enough (not soon enough for my mud-covered boots) though we were trudging through crusty, sun-cupped snow that had fallen weeks prior. 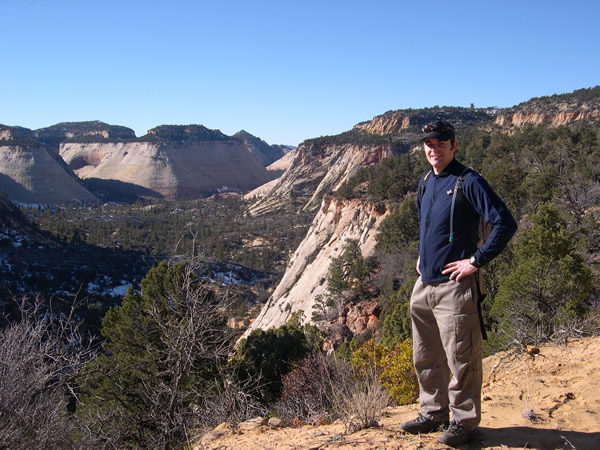 The snow was very welcomed after everyone’s boots were turned into elevator shoes as the mud continued to build and build until it was cleaned off by the patches of snow. The trick was to stay on the snow as long as possible.

Once we reached the summit and began our descent into Zion Canyon, the vistas began to change immediately. The trees got thicker and the steep, redrock and white sandstone walls of Zion Canyon came into view. Now it was time to descend. 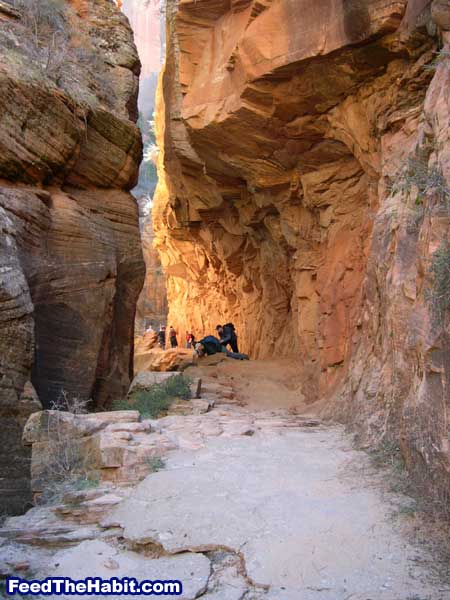 As we descended into Zion Canyon, I was quickly overwhelmed by the red canyon walls against the bright blue canvas sky. I had hiked in Zion before, but not this trail, and I couldn’t help but take pictures. That’s the beauty of digital cameras… you take more pictures because it doesn’t cost a dime.

As the trail meandered through the canyons, back to Zion Canyon, it funnels through a narrow slot canyon and the trail has been carved into the side of this slot canyon, revealing a beautiful, orange domed walkway. This portion of the hike was the most awe-inspiring, with 2000 foot redrock walls shooting all the way up from the floor of the slot canyon. Cool stuff! 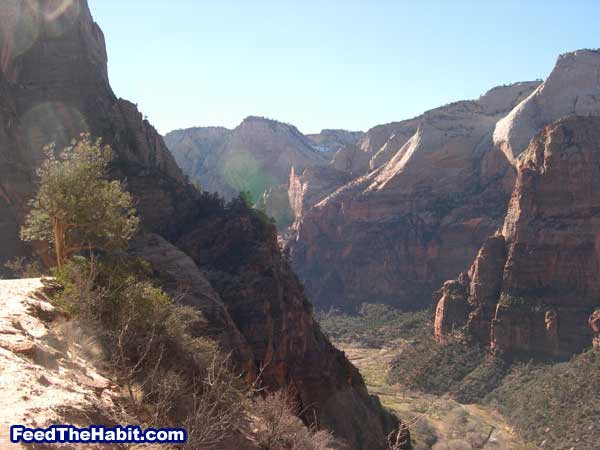 What was amazing about the hike was some of the grasses and weeds that were a healthy green color–evidence of our overly mild winter. It was beautiful, but depressing because of the looming drought conditions Utah may face this summer.

After arriving at the edge of Zion Canyon just above Weeping Rock and Lost Canyon, the trail switchbacks its way down to the canyon floor–a mere 1000 feet down. Once we reached the vehicles, I had two blackened toenails, sore knees and a great memory of how beautiful the hike was.

Since Northern Utah is continuing in an uncharacteristically low snow year, it just might be worth hitting Southern Utah while the crowds are non-existent and the weather is temperate.

More photos from the East Rim: 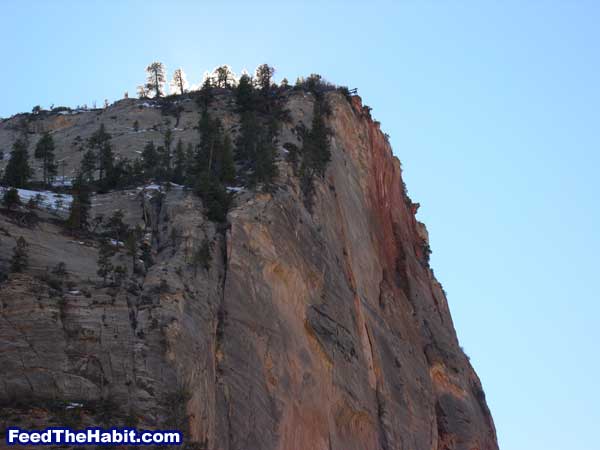 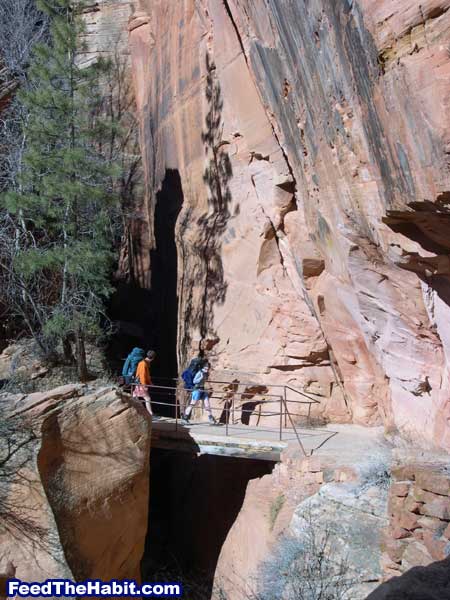