My affinity for La Sportiva is personal: I wore their popular Wildcat shoe at the Western States 100 last summer, where it met nearly every demand of mountain running in the Sierras.  The Gore-Tex version is specifically designed to tackle those same kinds of mountain trails in harsh winter conditions.

About the La Sportiva Wildcat GTX

The Wildcat is La Sportiva’s recommended shoe for race distances of 50 miles or more – or, if ultras aren’t your style, for a high-mileage trainer that can handle all variety of terrain.  This is the most highly-cushioned La Sportiva model, which strives to balance stability and freedom of movement.

From the midsole down, the GTX version is identical to the original Wildcat; the primary differences in this model lay in the upper, which uses Gore-Tex technology for improved resistance to the elements.

One of my favorite aspects of La Sportiva shoes is how comfortable they feel right out of the box; they latch onto your shoe like a snug slipper, and you feel like you can head out your door for a 50K.

The Gore-Tex version of the Wildcat adds a little bit of weight – 13.4 oz compared to 12.0 for the non-GTX style – which makes the shoe feel more bulky than most other La Sportiva offerings.  But this is a foul-weather trainer, not a racer that you’ll use when gunning for a PR.

Fortunately, most other features of the Wildcat are consistent: a low profile around the ankle, a snug forefoot fit aided by an even-tension lacing system, and and a thin, breathable sockliner.  La Sportiva’s AirMesh upper material is still utilized, although the moisture-resistant TPU film decreases the ventilation (and conversely, improves the insulation) of the GTX model. 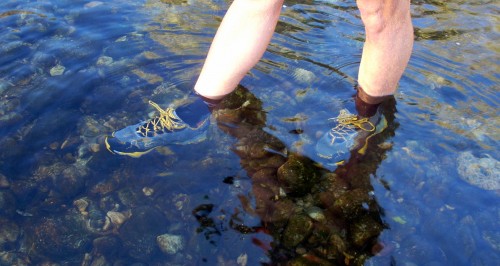 The submersion test for stream crossings

The Gore-Tex upper is highly effective at both keeping water out, and pushing water away once it finally gets in.  It kept the cold chill off of my feet during winter rainstorms, and moved water away from my feet (in combination with Drymax socks) very efficiently after being submerged in multiple river crossings.  However, when taking the shoes off after a wet run, they’re slower to completely dry than a traditional upper.

Thankfully, the GTX Wildcat maintains all the overall toughness of the original.  The Transkinetic Heel Stabilizer for lateral stability; a midsole transfer shank for support and energy transfer, and reinforcement in all the right places allow you to run with abandon across all terrain.

LaSportiva is known for its outstanding outsole traction, with FriXion AT rubber that is softer and stickier than typical outsoles, and the Impact Brake System with die-cut lugs angled in various directions to enhance braking and minimize slippage.  For the most extreme winter conditions, La Sportiva offers removable hobnails that are easily screwed in or out of the outsole for enhanced traction; they’re the same kind of corrosion resistant metal studs that are used in the auto industry for hand studding rally car tires.  Ice and snow are no match for your metal-studded Wildcat. 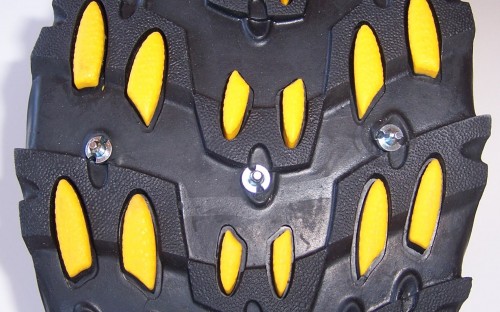 The underside of the Wildcat was always built for muddy, slippery terrain, and the GTX version provides an upper that is equally suited for such conditions.  This is a worthy foul-weather version of an already well-built trail model.