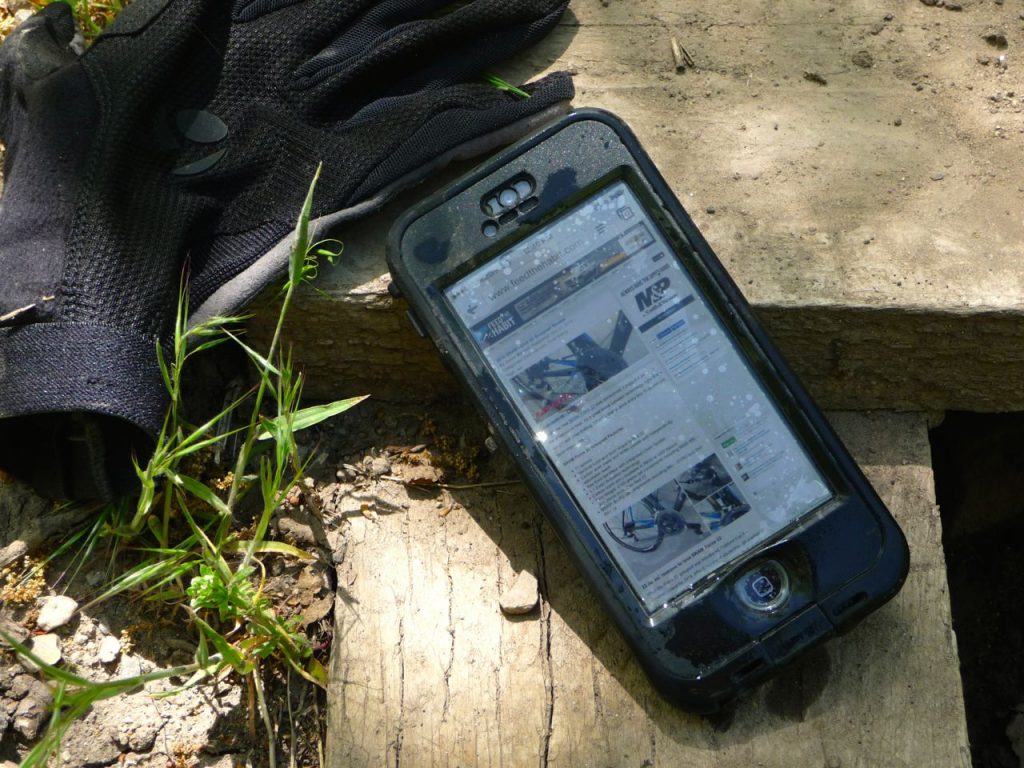 Outdoorsy iPhone owners have little choice but to protect their phone or face the prospect of accidental phone destruction at every turn. Thanks to the folks at Lifeproof, iPhone 5 owners can safely venture into the backcountry without worry. 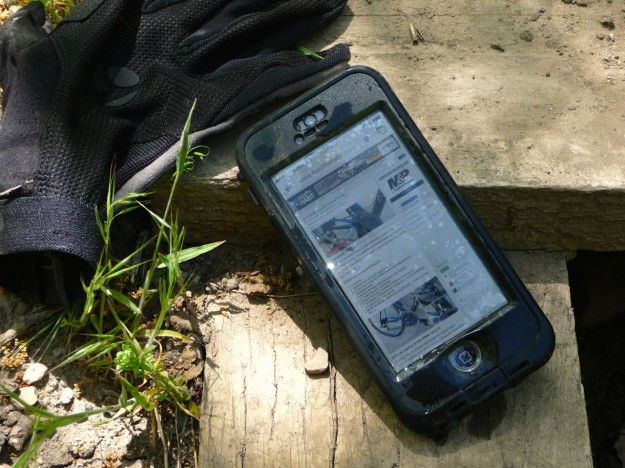 Let’s be honest, the iPhone 5 is super duper fragile. I mean, all that glass and square edges — what was Apple thinking? With the Samsung Galaxy S5 Active, you get water resistance and an extra dose of ruggedness, right out of the box. But, with the iPhone, you get hipster cool factor that breaks by just looking at it. I’ve gone through several iPhones in the past because they weren’t properly protected, but now that I’ve been using the Lifeproof Nuud, I can do the things I do and not have to pony up for a new replacement phone every few months.

Last year, I reviewed the Lifeproof Fre, which fully encases the phone. Soon after that review, Lifeproof introduced the new Nuud case that eliminates the built-in screen protector, while remaining just as waterproof and protective as the Fre. Since my biggest complaint with the Fre was the oft-unresponsive screen, the Nuud seemed like the perfect alternative. 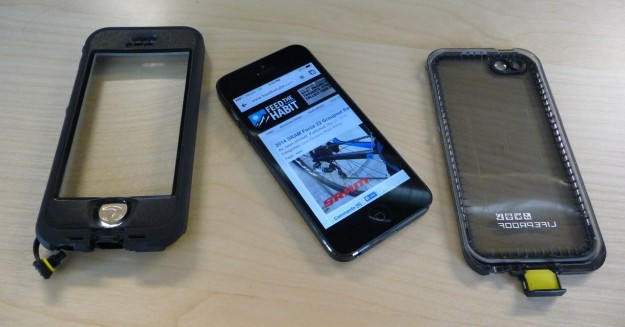 Installing the Nuud is pretty much the same as the Fre. It comes in two pieces, which snap together to form a protective shield. The Lightning connector is accessed via a small door for charging and the headphone jack is sealed by a small screw port that’s tethered to the case so as not to get lost. All other buttons, cameras, sensors and speakers function without need of ports or doors.

The form-factor of the Nuud is perfectly acceptable — it’s not bulky, but certainly does add to the size of the device. Since I’ve conceded to the fact that a case is an absolute necessity, I think the form factor is really svelte, all things considered. I have noticed just a couple of minor gripes with the function of the phone while in the case.

The first one is that the vibrate switch is sometimes difficult to change. You have to remember that it functions opposite of the way it does without the case and play with it a little to get it to work. The only other nuance that I have become accustomed to is that I can’t consistently access the iOS Control Center (swipe-up from bottom) because the case blocks the screen from properly sensing the upswipe. I can’t quite tell why it works sometimes and doesn’t others, but it is frustrating. 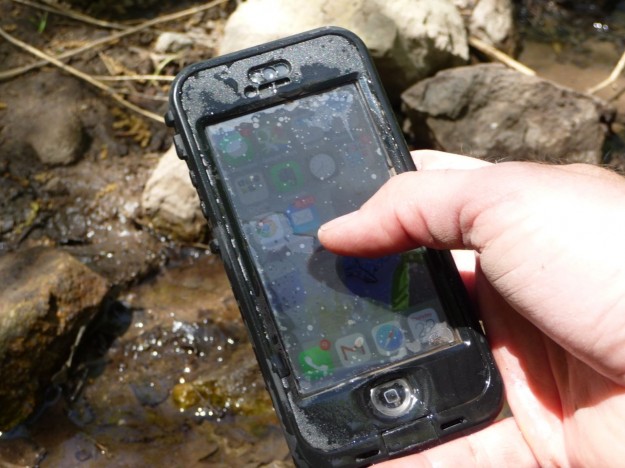 Those frustrations aside, the screen works extremely well otherwise. I’ve loved being able to touch the actual screen and enjoy the inherent responsiveness. I’ve been using the scratch protector on the screen for additional protection. I’ll say that I’ve never once been able to install a screen protector without bubbles or lint particles underneath. On my first try, I left one side of the film on the protector and used it that way for over a month, not knowing the wiser. I lived with bubbles galore. Then, one day I decided to pull off the protector and noticed that it was peeling apart. Doh. I peeled off the backside and re-installed it without a single bubble or piece of lint — so much better now!

Just a couple more items regarding the function of the phone in the case. Talking on the phone is somewhat painful as the plastic is hard and not very comfortable on the ear, but who actually talks on their phones these days anyway? Just be aware that lengthly calls should be done hands-free unless you like inflicting pain on your ear. And, be sure to clean out the camera lens covers every once in awhile as lint and goo tends to build up. Keep in mind that you have to either use the newer earbuds with a small diameter plug, or use the included screw-in extension.

I don’t know what my problem is, but I drop my iPhone, a lot. I mean, this thing might as well be a hockey puck because it probably gets dropped on a daily basis in some way. I can confidently say that everything I’ve done to the phone has been taken in stride with very little signs of abuse to the case and the phone doesn’t know the wiser. On one occasion, I had my phone set atop the railing of a steel bridge for road bike selfie shots. A sudden wind gust tipped it over and it fell 5 feet to asphalt. I thought it was toast, but the case only received a small scratch. So awesome. 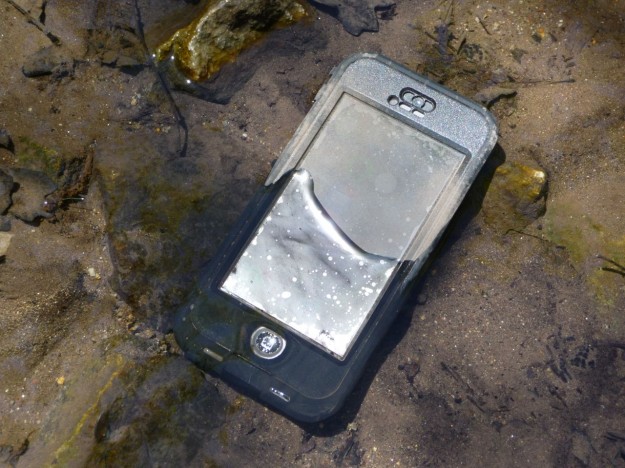 Water protection — yup, tested that too

I take my phone in the shower, stuff it into my bike jersey and have even taken underwater shots looking for rainbow trout at my local fishing hole. I don’t worry about it at all. It is so nice to have a phone that can endure everything I throw at it. I will say that underwater screen operation is problematic as the touchscreen pretty much goes unresponsive when wet. To take underwater photos, you’ll have to change your phone settings to use the volume buttons as the shutter or use a photo timer app.

Sadly, two months after posting this review, my case leaked and now I’m the proud owner of a borked iPhone. I’m calling this “splash resistant” at this point. Do not submerse your phone for extended periods using this case.

How about audio quality?

With something covering both the microphone and speakers, some may wonder how it still functions. The membranes used to cover the speakers and microphone are akin to Gore-Tex in that it allows sound waves to penetrate, but water droplets don’t pass through. For audio calls, sound on both ends is fantastic. And the speakers do work well, but you have to be aware of the surface you’re placing it on. If the phone is flat against a hard surface, the sound is very loud and clear, but if you lean it up against something or place it on a soft surface (like carpet).

UPDATE (7/31/14): Well, after using this case many times in rivers, lakes, ocean, pools and the shower, it has bit the dust and I’m now the proud owner of an iPhone 5 brick. I had it in my back pocket while swimming with the kids at the local pool and the case leaked. So, I can’t whole-heartedly recommend this phone for intense water use. I’ll just call it “splash proof” — definitely not for much more than that.

As you can tell, this case is perfect for my lifestyle. I can stuff it into my jersey pocket and sweat it in for hours. Then, I can bring it to the river and use it to take underwater photos. I can drop it and otherwise abuse it — and my phone still looks brand new.

The Lifeproof Nuud is the best case for outdoor adventurers who bring their phone everywhere they go — so long as they don’t immerse the phone on a regular basis (mine leaked two months after posting the initial review).