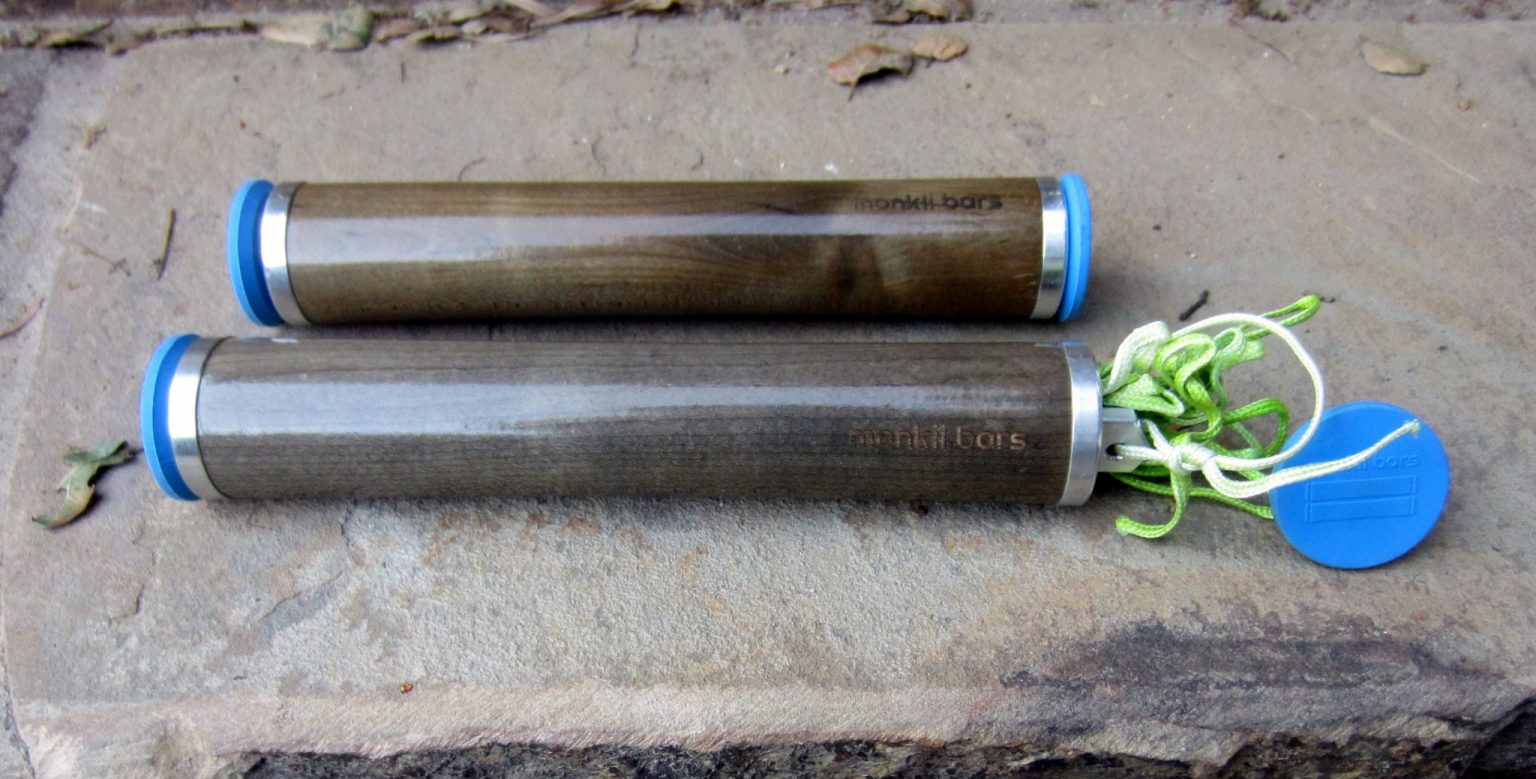 Features included in one Monkii kit:

Monkii-ing around with bodyweight training

I’ve been an ultrarunner for more than a decade, but it’s only been over the past couple of years that I developed an understanding and appreciation for the importance of all-around body conditioning for improved performance and injury prevention.  As much as runners might hate to admit it, upper body and core strength (especially core strength) are just as important as leg strength.

The problem is, there’s a key reason that ultrarunners typically avoid strength training: we hate being indoors.  The health clubs and gym scenes are anathema to us, and we’d rather be 20 miles into the wilderness than doing pushups or sit-ups in the living room.  So if there was a way to incorporate strength training into our routines that still allows us to explore and experience the outdoors, that would be a welcome development indeed.  And if that development was easily portable, aesthetically pleasing, and highly versatile, there wouldn’t be any excuse for ultrarunners to avoid strength training anymore.

Fellow outdoor enthusiasts, meet monkii bars: the equipment that kills all of your excuses.  It’s an ultra-portable bodyweight system that turns anyplace in the world into your private training gym.  The monkii bar (the company doesn’t capitalize the name, in case you’re wondering) story has its roots in the great outdoors, as company founders Dan Vinson and David Hunt brainstormed the product while working as a wilderness ranger in Sequoia (Dan) and wildland firefighter in Montana (David).  Monkii bars made their public debut in 2014 with a successful Kickstarter campaign, and have generated a good deal of buzz in the outdoor and fitness communities since then – so there are a lot of people happy to hear that monkii bars are finally available for purchase through the company website.

We’ve been testing a set for about two months now, and it’s simultaneously kicking our butts while totally redefining what’s possible in the course of an outdoor fitness outing.  Basically, the system functions like one of those TRX suspension training setups you see at your local gym – except this one is only 7.5 inches long, and the full set weighs less than one pound.  (It’s also worth noting that the term “suspension training” appears proprietary to the TRX system, as you don’t see it anywhere in the monkii bar resources.)  The bars are easy to tuck into a backpack or hydration pack for setup in the middle of a run or hike, allowing you to easily throw some strength training into the mix along the way.  They can also be setup indoors on a door frame using an accessory called the monkii branch; we’ve used this to create a workout gym in hotel rooms on business trips, and also strapped it around deck posts to do a bodyweight workout after returning from a run.

Setup of the bars is remarkably simple, and takes less than 5 minutes from start to finish once you get the hang of it.  A thin suspension line is wound through the center of each bar, then flung over a tree branch or other overhead object and wound around a small metal adjuster piece.  The line can easily be lengthened or shortened depending on what exercise you’re doing, and the whole system can be broken down and stored in just a few minutes also.  The lines and adjusters fit inside the hollow opening of each bar, and are held in place with the bar end plugs.

The suspension line is made of an incredibly sturdy fiber called Spectra, which is most commonly used in rock climbing ropes.  It’s designed for rubbing, scuffing, and scraping, and retains its tensile strength even with prolonged weather exposure.  The company claims they’ve used the same lines for a year without any fraying or wear, but if you still feel nervous after a while, they also offer a free line replacement program.  Weight capacity for the system is 220lbs, although it’s not clear if that’s due to the line or the bars themselves.

Those bars are made from maple hardwood, and are officially offered in three color options, although with variances in natural wood grain and the natural dyes the company uses, each bar ends up with a somewhat unique color.  The wood surface is very smooth to the touch, which is one area that could perhaps use a bit of tinkering, as it requires you to really focus on your grip if you’re sweating a lot during your workout.

Once you have the system setup, there’s a massive variety of strength exercises at your disposal.  The easiest areas to target are your upper body and core, but monkii bars can also be used for leg strengthening exercises.  The company provides numerous demo videos on its website to give you exercise ideas, and the only limitations are 1) your creativity, and 2) how quickly your muscles start to get wobbly.  Because make no mistake: bodyweight workouts are super challenging.  Having to constantly stabilize your body in space while going through a full exercise range of motion magnifies the muscle requirement enormously.

As an example, when I started using the system, I could pound out about 30-40 consecutive pushups on flat ground – but on the monkii bars, I tapped out after a set of 10.  When attempting some of the new exercises, sometimes it’s a challenge just to do one or two reps correctly.  Needless to say, if you build up to proficiency with this type of bodyweight training, your strength and stability will be increased by orders of magnitude over traditional floor work.

On a somewhat related note, another note of caution for using monkii bars is that you have to pay close attention to your form, and know where your limits are before reaching a point of muscle failure.  Although they somewhat resemble a kind of playground toy, monkii bars do carry a potential for injury if used recklessly.  The company identifies a minimum age requirement of 16 years old, most likely in recognition of the need for responsible use.

Monkii bars were designed in Colorado and are made in the USA, and they offer almost everything you can ask for in workout equipment: they are cool to look at, fun to use, highly durable and versatile, and are amazingly effective at building your overall strength and conditioning.  If you have the opportunity to monkii around this summer, your body will ultimately thank you.

For hikers, campers, and trail runners, there’s really no excuse to avoid strength training anymore.  The monkii bars bodyweight system should be in every serious outdoor fitness enthusiast’s workout repertoire.