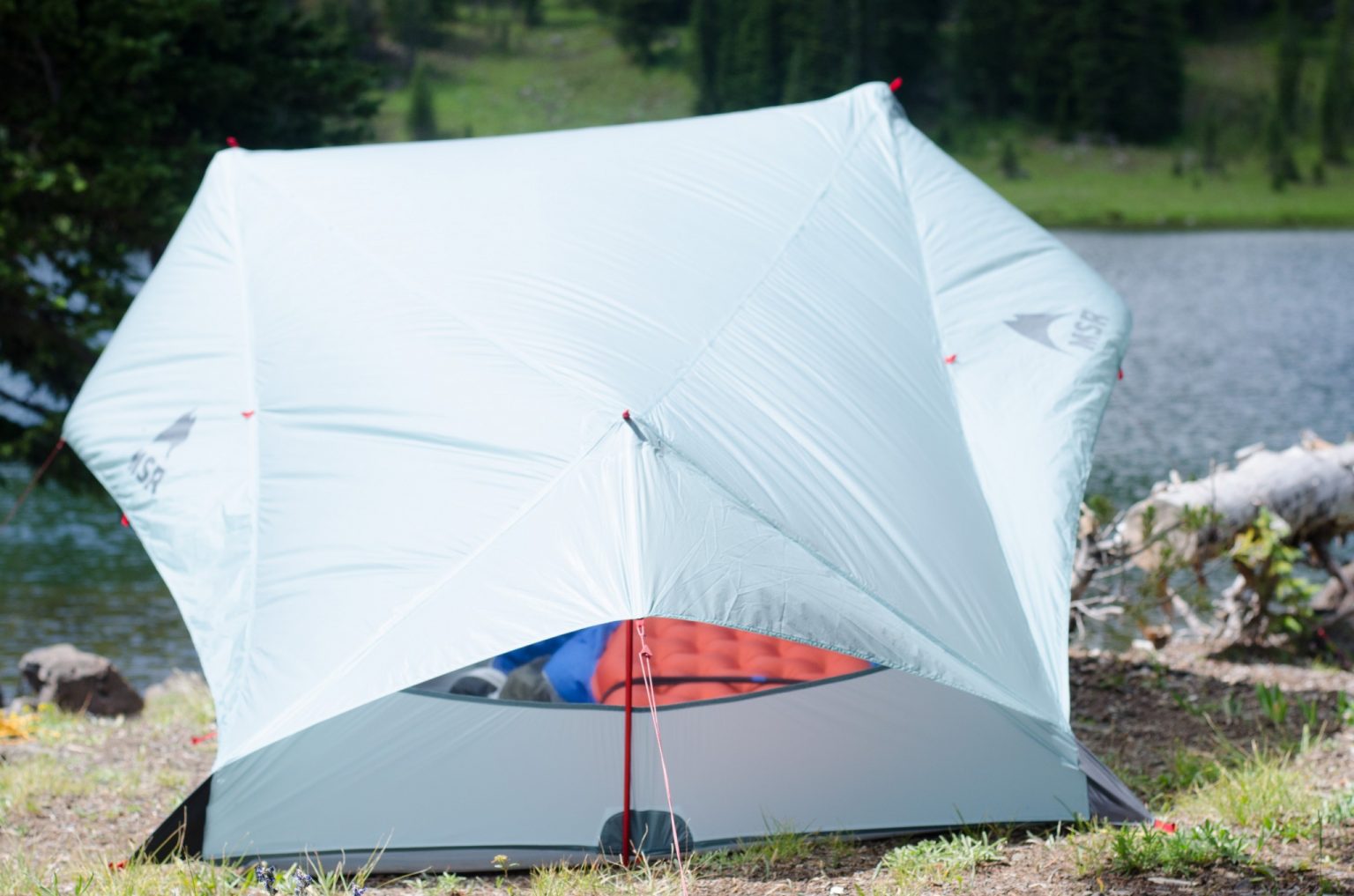 When a brand like Mountain Safety Research applies itself to building an ultralight summer shelter, we can expect interesting things to happen. For a brand that cut its teeth on Rainier’s seracs and cleavers, it seems at first that their forté might lie more with burly big-mountain shelters than with the minimalism of today’s summer shelters. That said, their new FlyLite shelter is breaking new ground into how light a full-protection three season tent can be. 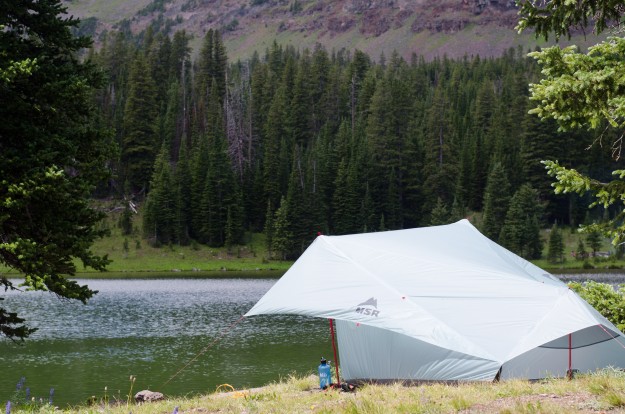 There are a number of other ultralight summer tents being offered in what seems to be a rejuvenated interest for minimalism in mainstream backpacking, but what MSR’s FlyLite really brings to the table is a perhaps class-leading combination of protection and light weight; just as an example, the packed weight of the FlyLite, a two-person tent, is still 3 oz. less than a one person tent that we recently reviewed. Potential users should beware, though – MSR sold themselves out to the minimalism gods and, as such, the tent has certain sacrifices that accompany its many benefits. We’ll get to all of those in good time.

First, the structure of the tent itself. The 29 square feet of the FlyLite occupy an unremarkable layout that is headed up by a wide door and tapers gently to the foot of the tent. The door is a behemoth that is easily wide enough for two people to sit side by side in, and it’s just a simple sheet of nylon that tops out in a strip of mesh for ventilation. There is no separate zipper to open up a mesh window or anything like that. At the other end of things, a substantial vent at the foot of the tent encourages ventilation. I’d say it does a good job, too – in all of my nights of testing I never experienced substantial condensation, even on a rainy night in the Gallatins. That said, Montana is always windy, and I’m quite confident that a Cascades no-wind downpour could conjure up some moisture on the inside of the tent.

This is not a freestanding tent, so it needs to be fully staked out before it’s set up. Set up is delightfully straightforward, and I’m happy to say that my first time wrangling with it was on a windy night in the pitch dark with a failing headlight. It was a perfect Boy Scout moment. I was very pleased with how quickly the tent pitches – generous reinforced pockets easily swallowed the handles of my MSR Flight 3 poles, which are about as bulky as they come. Once they’re inserted and your poles are extended, it’s a simple matter to guy the tent out tightly where the poles insert and you’re good to go.

As things would happen, I had plenty of opportunity to test the FlyLite in the rain. I think most of us are a little skeptical of designs that branch outside of the norm, so I placed the tent in punishing conditions on windy days to see just how much it could take. On its second test trip near Emerald Lake, I set it up with the wind pushing directly onto the door. This presents a flat surface that catches the wind like a sail and was very punishing on the tent. What I learned was reassuring – so long as the guylines are sturdily attached to stakes, rocks or trees, you can count on the FlyLite to hold up to a lot of wind. Mine saw gusts up to 30 miles per hour blowing directly onto the broad side of the tent and it did just fine. My only quibble is that it’s quite difficult to get the slight awning over the door to pitch tightly, which makes the tent considerably louder as the fabric flaps in the wind. 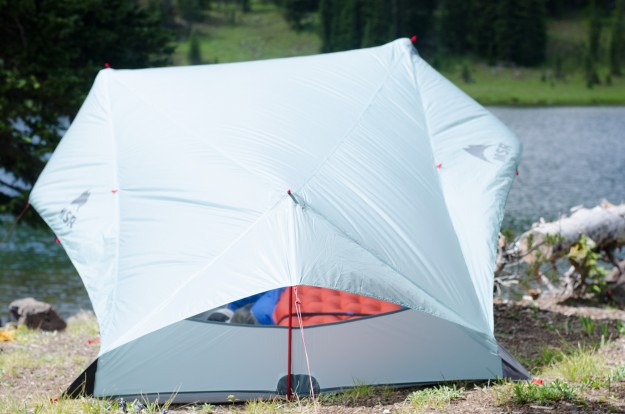 That highlights an interesting point of tent design that we don’t usually consider: guyout points are often the strongest points of a tent, and they when they’re incorporated into the structure of a tent they’re not susceptible to the same flexion failure that a pole might be. So, since the FlyLite rests so squarely on guylines, you can be pretty confident that the tent will hold up in foul weather. Incidentally, MSR included two extra guylines and guy out points where the trekking poles insert, so you can theoretically pitch the tent by attaching those to an overhanging branch, thus saving you the weight of trekking poles.

The FlyLite has many charming points, but it falls short on liveability. It’s spacious enough at 29 square feet for two people and that wide door does something to give the tent the feeling of extra space, but it has some limiting factors. For one, the fairly aggressive way the tent narrows towards it foot precludes couples from staggering while they sleep – that is to say, you’re probably going to be sleeping face to face with your partner, breathing in their summer sausage-y breath, all night long. However, not every backpacking couple cares about staggering, so it may be a non-issue. Also, a plus here – MSR included two reasonably sized mesh pockets on either side of the door, perfect for glasses, small books and the like.

The real issue is the tent’s overall lack of liveable touches but it’s important to frame this in terms of the tent’s inclination towards minimalism, which largely excuses it. The single biggest issue is the lack of any windows. There is a large mesh panel on each of the tent’s sidewalls, but those are covered up by the fly of the tent. Additionally, the door is simply a single panel of fabric with a mesh panel on top; that means you can zip it down to see out, but if you want any protection from bugs or rain then you’ll have to close it. This becomes an issue when you’re forced into the tent for one reason or another – if you’re waiting out a storm or resting on a buggy afternoon, you’ll have to do it in a sealed up tent with no view of the beautiful scenery around you. It was mostly an issue for me in buggy areas when I couldn’t adjust the ventilation in the tent simply because the door had to be shut all night long, with only that mesh panel at its top to provide airflow.

As I said, this has to be couched in the tent’s intention of being a minimalist shelter. People looking at buying the FlyLite have to recognize that they’re making certain sacrifices by purchasing what is likely the lightest mainstream minimalist shelter on the market, and one of them is the lack of substantial doors and windows. On most trips, this won’t be a problem – it’s not like we go backpacking to hang out in our tent. However, it’s something that you’ll notice and as such it bears stating. On the other hand, there’s another performance benefit to all of this: since the fly and tent body are integrated as what is essentially a singe wall tent, you can pitch the tent in a downpour and the interior will remain dry since you don’t have to put on a separate fly after the main body. That’s a wonderful trait in a tent and it’s one that I definitely had cause to appreciate. 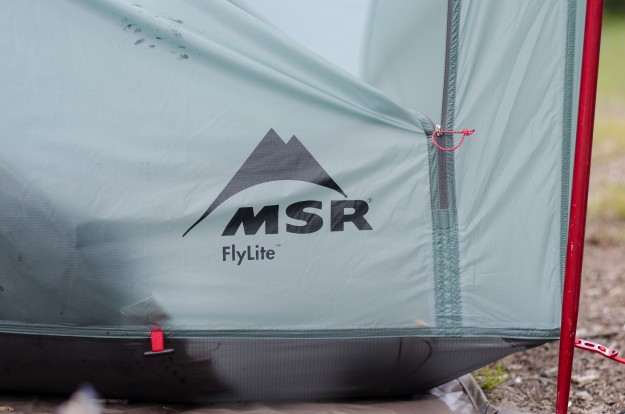 If you want an exceedingly light shelter and are willing to make one or two tradeoffs, it’s hard to beat the MSR FlyLite as a ready-made winner. There are lighter options from boutique companies, but I daresay that few of them offer the same foolproof reliability of an MSR tent. In that regard, I expect that it’ll reach a wide market as people seek to shed ounces but don’t want to risk sacrificing protection from the elements.