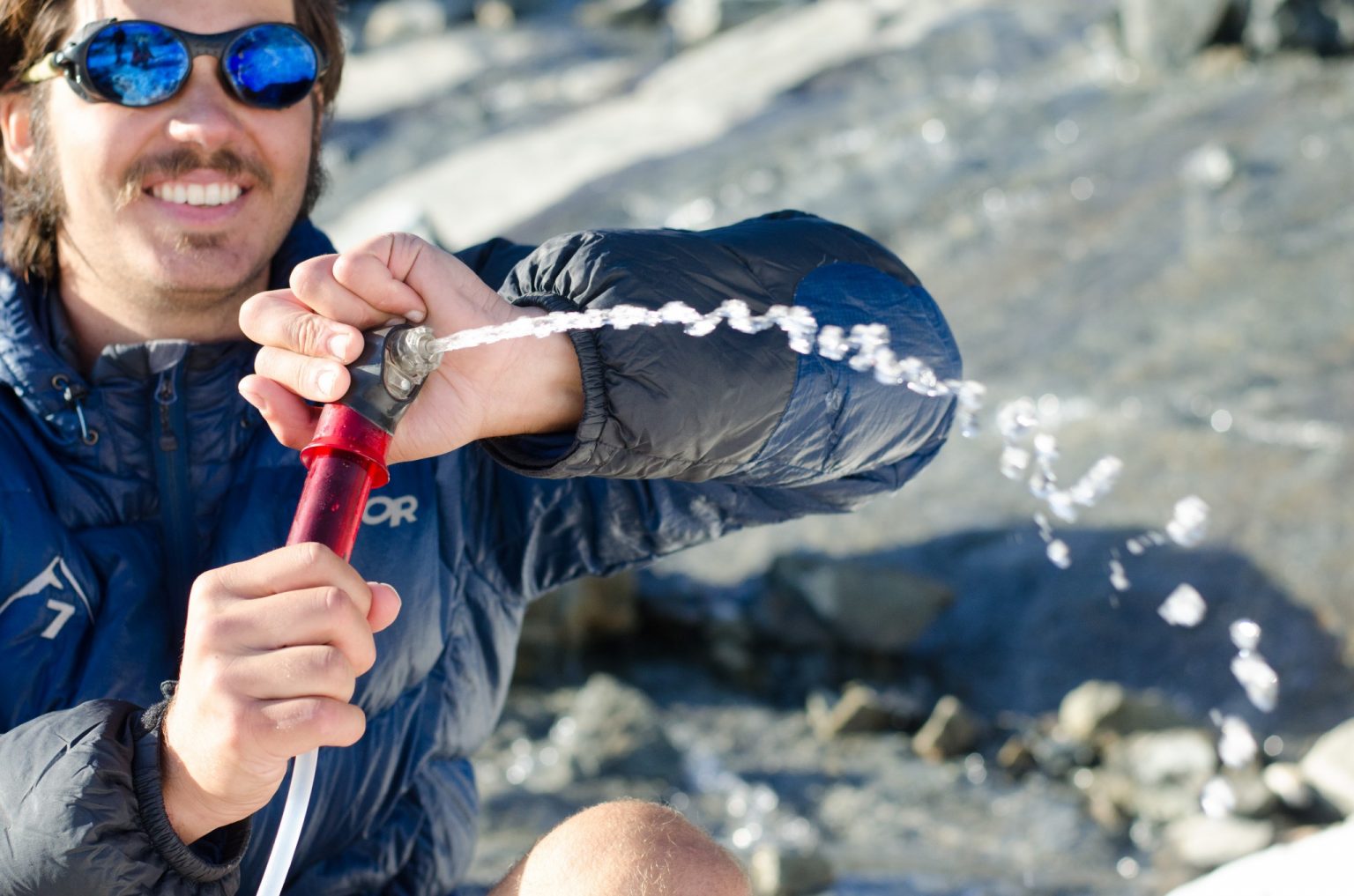 I’m not quite sure how it’s done it, but the HyperFlow from MSR seems to have flown under the radar for quite some time now.  It was, believe it or not, back in 2007 when Jason first profiled it at Outdoor Retailer.  He said that the HyperFlow would quickly become ‘required gear’ for any sort of adventure outing due to its insanely low weight and equally baffling filtration rate.  Well, the cat is out of the box, folks: I’m happy as a clam to present Feed the Habit’s coverage of this remarkable yet under-recognized water filter. 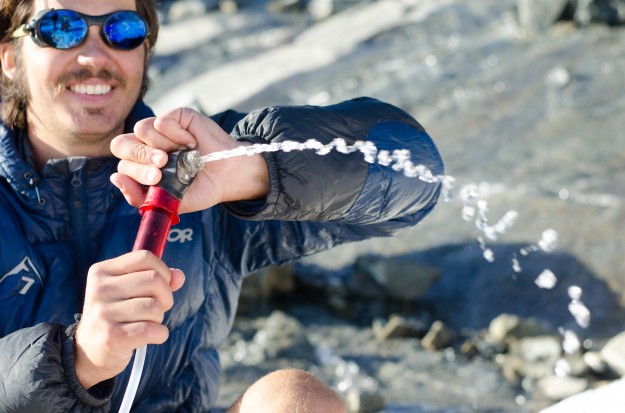 I suppose the thru-hiker’s dilemma with water is that it’s both heavy and awkard.  Heavy, because, well, we all know that it’s a flipping pain to carry around a dromedary.  Awkward because it takes up precious time to filter and treat when you’re trying to pack in 25 mile days.  Some ultralighters have found the solution through careful planning (read: mild dehydration) while others have erred on the side of caution and, horribile dictu, have carried more weight than they need to in moisture-rich alpine areas.

MSR rode into this thorny issue like a knight in (ultralight) shining armor; meet the HyperFlow.  This little guy combines the enviable qualities of extremely low weights, low size and squirt gun-like pressures into one single package.  For one thing, the newest incarnation weighs just 7.4 ounces making it lighter than virtually any ceramic filter on the market.  Some of the other hollow fiber technologies that we’re seeing nowawadays have comparably low rates for the actual filter, but they’re often packaged in a gravity system (like the MSR AutoFlow or the Platypus GravityWorks) that really chocks up extra weight.  In contrast, the HyperFlow is a sleek and self-contained minimalist package that looks more like my old Topeak Pocket Rocket than a water filter.

Its size is impressive, but what really helps the HyperFlow stand out is its almost comical filtration rate.  Other reviewers have analogized it to a Super Soaker.  You remember those? Well, it’s a bit of an exaggeration but there’s some truth to it.  On average, it only took me twenty one strokes to pump a full liter of water.  That’s insane.  It’s well under a minute to cap, filter, and then recap a bottle if you’re moving at a good clip.

I took this filter with me on a few large-group outings where we had the option to use my old gravity filter; instead, I used the HyperFlow just because it was so easy and convenient.  Admittedly we weren’t following the appropriate backflushing procedure (I’ll talk about that soon) but I’ll be darned if I could tell a difference in filtration rate thanks to the clear, rock-filtered water source I was using. 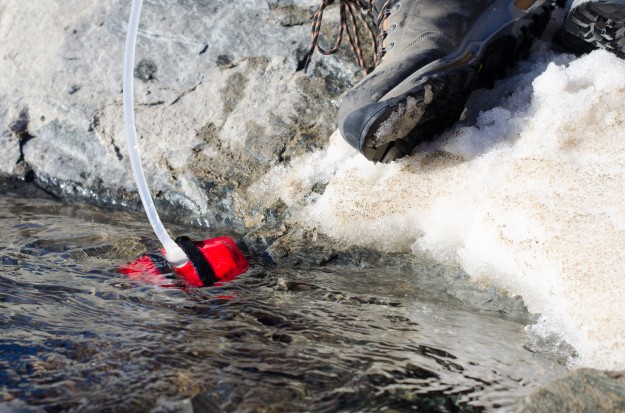 We stopped on the trail next to a Park Service crew that was maintaining the route up to the Sahale Arm.  I popped out my filter and started cranking out a few liters for my clients and the sweaty crew of guys was absolutely amazed — they’d never seen anything like it before, they said.  That really sums up the HyperFlow’s existence right now: it blows away everyone who it meets, but few enough people have heard of them.  It’s like a really good Indy band.  Its prefilter floaty is unique, too; it lies flat on the water and its large surface area spreads out so that it doesn’t need to be submerged; this is perfect for small, shallow sources like late-season streams and other sub-optimal depths.

There’s only one thing standing in the way of the HyperFlow and universal acclaim; it tends to clog.  MSR suggests that you perform a backflushing procedure every eight liters of water; for single backpackers, that basically means that it becomes a nighttime chore to perform every evening.  For the sake of testing, I didn’t follow this procedure at all on my first trip; we filtered mostly clear sources with a little bit of glacial silt mixed in and the HyperFlow didn’t really show any signs of letting up.

I used it on a few more trips and backflushed according to the procedure (it’s simple – just reverse two of the internals) and didn’t have any issue until, well, a pretty bad clog.  The HyperFlow became so plugged that I couldn’t even squeeze tap water through, so I sent it back to MSR and they replaced it with a new one.  I should note, too, that many people have complained that the backflushing procedure is too complicated; it may be the fact that I’m in biology and am used to fiddly procedures, but I thought that backflushing was quick and simple.

So, I’m a bit mixed – I’m still waiting to hear from MSR what the issue was with my filter; in truth, though, if I were a normal user I’d take care to backflush regularly and according to the procedure.  I pushed the HyperFlow harder than a normal user because, well, I’m a gear tester.  It pumped water for nine mountaineers for a week at one point and that, coupled with glacial silt, makes for a pretty abusive test.  I’m inclined to be lenient; after all, it’s only rational that its otherwise stellar performance would be coupled with natural drawbacks.  I’m confident that those drawbacks can be minimized with conscientious ownership.

Despite the failure of my first HyperFlow, I’m a supporter of the design.  In my ideal fast-and-light endeavours, I would carry the HyperFlow and a chloride bottle (or maybe some bromide) as a backup; the HyperFlow would guarantee delicious, fresh-tasting water just as fast as I can drink, and the backups would be an appropriate safeguard in the (realistically) unlikely event that the pump would plug again.  In my view, it’s time for the HyperFlow to step up and take its place as a leader amongst MSR’s already sterling filtration cohort.