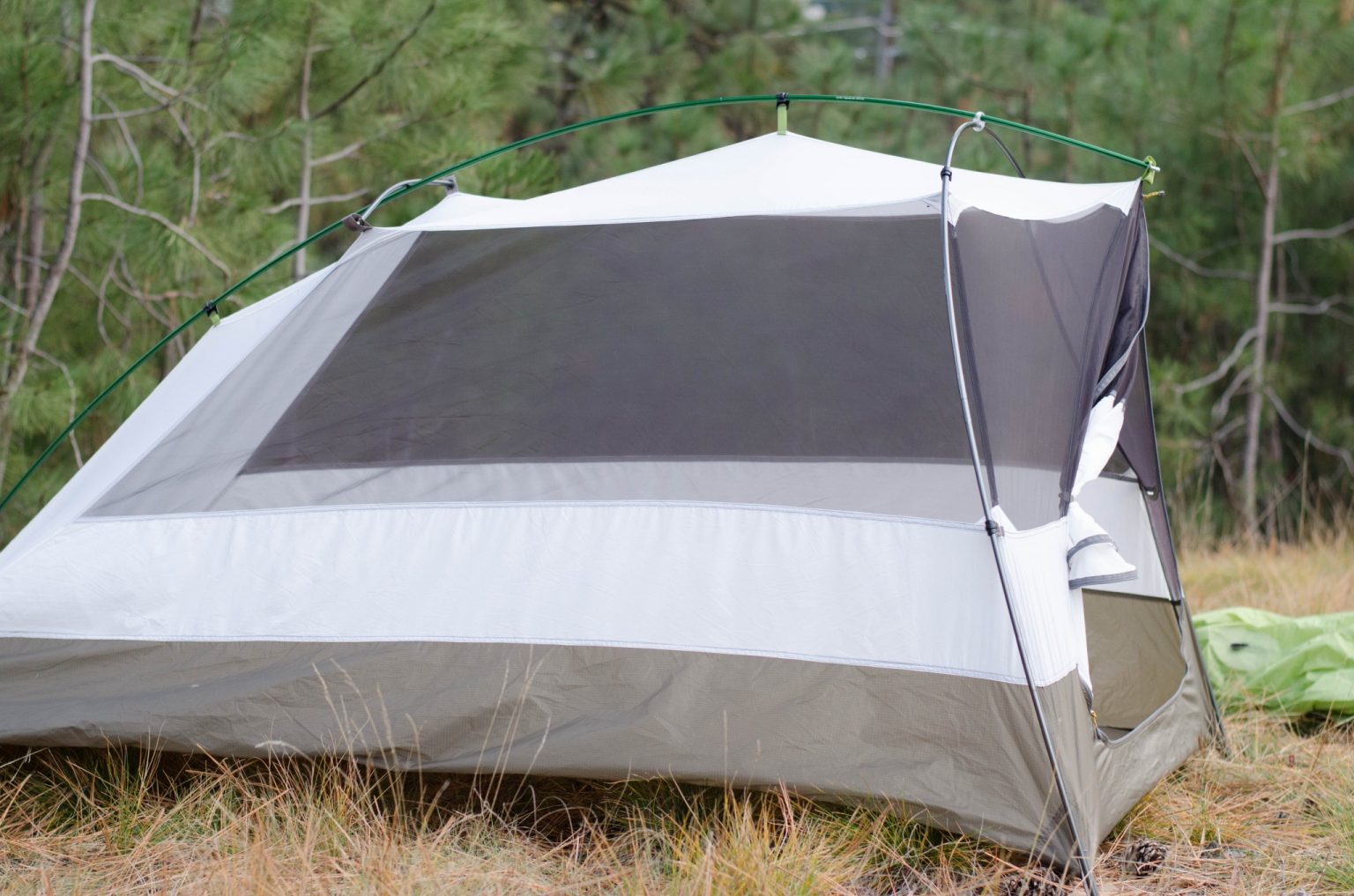 If there are any Harry Potter fans in our readership, you might remember Hermione’s expandable purse and the tremendous collection of junk that she carried around on their adventures; in many ways, the MSR Nook can be directly compared to this adaptable and stylish accessory: the Nook is designed to cram a whole lot of living space into a tiny floor plan. 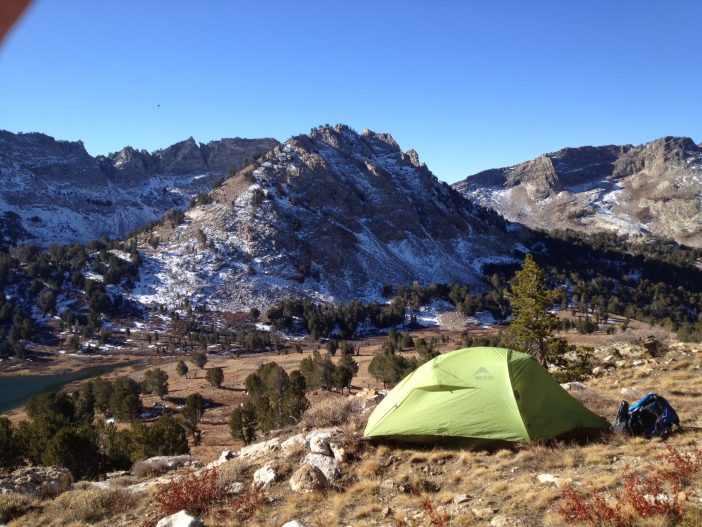 The idea behind the MSR Nook is that it’s designed to slot into tiny spaces while preserving good livability.  It’s a front-entrance tent featuring two of DAC’s brilliant poles, high wind resistance and all of MSR’s design know-how.  I put the tent through a wide variety of tests, including a drizzly nights in Washington and high-altitude excursions in the Nevada backcountry.

A few weeks ago I got into the hills and headed off-trail to some of the unnamed lakes in Nevada’s Ruby Mountains.  Roundabouts of 5:20 that evening, the sun had just set from my vantage point at 10,200 feet and it was definitely time to settle down at a campsite.  I was strung out along a broad ridge and I needed a place that fit LNT standards for a night in the backcountry.  At that elevation, the growing season is incredibly short and even a brief encampment can drastically hinder alpine vegetation, so I needed a place where my stay would leave the country as pristine as I found it.  Searching by headlight at this point (I frequently make this mistake – I gawk too much as I hike) I found a rocky outcropping where some sand had built up in the scrub brush.  It was fairly flat, but the space was narrow and not terribly long – I hadn’t used the Nook much at this point and I had my doubts.

I pulled the tent off of my pack and got to work setting it up.  The Nook includes five MSR Groundhog Mini stakes.  These little aluminum wonders dig in well and weight next to nothing – they’re easy to drive but hold well in decent soil.  Unrolling the tent finds you looking at the main body, fly and two DAC NSL poles; one of these is a tiny 18-inch strut designed that sits on the ridge of the tent, and the other is really two poles merged into one thanks to one of DAC’s nifty gadgets, the DAC Swivel Hub.  I spread out the tent under my headlight and began fumbling with the poles; after a bit of experimenting, I discovered that the easiest way to get the Nook up is to insert both sides of the door pole (the greyish one) into the grommets on the body and then connect the ridge pole fore and aft from there; lastly, slap the short pole onto the ridgeline to spread out the inside of the tent.  Stake out the Nook nice and tight because this baby is built to resist some fierce weather.

Spreading the fly out on the tent can be a little confusing because the MSR logo is very subtle — instead, look for the circular patches of reinforcement at the tie-on points inside of the fly and make sure those go down.  The fly attaches via grommets at the front of the tent and plastic clips at the foot of the tend which can be tightened after setup.  The hardest bit of setup is stretching the rainfly’s grommets over the ends of the short crosspiece pole on the ridgeline – the tolerance here is obnoxiously tight and getting it on and off left me swearing quietly to myself on several occasions.  Alright, you’re ready unless you want to make use of MSR’s plentiful guy-out points – otherwise, ratchet down the fly front and rear for a nice, quiet night and don’t forget to prop open the twin fly vents and velcro them in place.  By the way, I highly recommend using reflective guylines because the Nook itself doesn’t have a single reflective feature, making it very easy to lose at night.

Slipping into the tent, you’re liable to notice a few different things.  For one, the vestibule isn’t very roomy but it offers great protection from the elements.  Inside of the tent, you’ll find one of the Nook’s main selling points: its nearly-vertical walls, which work hard to offset the modest floorplan and peak height.  The Nook offers 26.2 square feet of room, which looks pretty slim next to the REI Half Dome’s 31.8 square feet, the Black Diamond Mesa’s 32.5 square feet, or even the Sierra Designs’ Mojo 2 26.5 square feet.  The vestibule is equally diminutive when compared to these tents – the Nook’s six square feet of exterior covered storage is definitely on the small end of the scale.  And again, the Nook’s 38 inch peak interior height comes in unremarkably average when stacked up to comparable tents.

So, what makes the Nook special?  Well, let’s remember that the small footprint is specifically designed so that the Nook can slide onto backcountry ledges and pockets of durable surface.  The comfort side of things is handled by the nearly-vertical walls, aided by the aggressively arched door pole and the spreader pole further down the ridgeline.  The Nook feels like it has a higher ceiling than its 38 inches would suggest, and it definitely feels like that when my 5’11” frame is sitting up comfortably in the tent.

MSR was very careful with the way they maximized interior space in the Nook and we’re going to talk about two of the methods they used to accomplish this: a ‘perimeter-cut’ floor and nearly-vertical walls.  Nearly vertical walls aren’t all that interesting because many tents nowadays advertise these; MSR’s design is particularly effective, though, and the pole design (especially the spreader bar on the ridge of the tend) really widen the interior of the tent.  The perimeter-cut floor is a little more interesting to talk about; a traditional bathtub-style floor is essential for those who camp in particularly wet weather or are inexperienced at selecting campsites.  These bathtub floors will rise far up the side of the tent, swathing it in waterproof goodness; the problem with this design is that the single piece of floor fabric gets awfully billowy and encroaches on interior space.

In light of this, MSR chose a perimeter-cut floor which makes use of specifically sized panels of 40D PU-coated nylon which are stitched together with taped seams.  The upshot is that you now have a nice, flat floor instead of a billowy mess; the downside is that you have extra seams in high-abrasion areas. 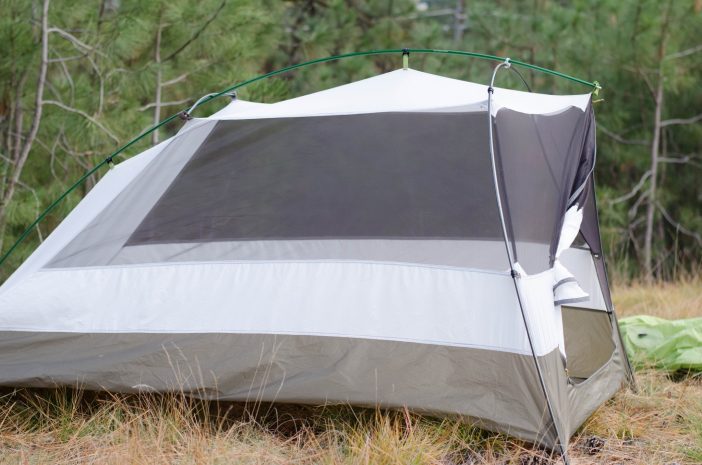 Most of the fabric on the Nook is 20D nylon; the lower tent body and foot is done in 20D nylon and the upper is all-mesh; this is an elegant solution to promote airflow while denying the debris that inevitably blows into a fully-meshed tent.  I don’t think it was wise of MSR to make the entire foot of the tent in solid nylon as condensation down there is definitely a problem.  There’s virtually no airflow down there when your sleeping bag is taking up space and I experienced condensation at the foot of the tent, even in the bone-dry Nevada high desert.  This was the one trouble spot: otherwise, the Nook manages condensation quite well.

When We Say Liveability…

There are quite a few factors that come into play when we talk about how ‘liveable’ a tent is – that is, how positive can the tent make an experience like having to wait out a storm for a whole day?  We’ve talked about some of the aspects such as peak height and interior space, but there’s way more to it than that.

One of my favorite things about tent camping is waking up to sunlight coming in through the tent; in some of my most favorite tents, the sun slopes in through the fabric and makes me think that everything outside is bright and filled with daisies.  The Nook has a lovely, earth-tone rainfly which looks politely subdued in the hills, but it makes the interior light a fairly drab color.  Even thought the Nook is a very strong three-season tent, I can’t say that waiting out a storm in the sickly green light inside of the tent would be a fun experience.  That being said, earth-tone rainflies are often preferred because they’re less obnoxious to other campers and they look more at peace with their surroundings.  What’s my preference?  I still love my Sierra Designs Mojo’s blue/white tent walls – they’re stunning to wake up to.

The Nook has a few quirks that affected my time in the tent.  The single door is on the small side and, since it’s asymmetrical, it’s difficult for the person sleeping on the left side of the tent to get outside.  Additionally, the pockets are absolutely miniscule: these pockets, stitched into the front of the tent alongside the door, offer just enough space for a few bars, a headlight and maybe a pet squirrel, providing it wasn’t too chubby.  MSR’s vestibule design is excellent and offers a lot of protection from the elements – a single, sealed zipper running up the front of the vestibule eliminates the need for a baffle to get caught in the zipper.  More importantly, you can open up either side of the vestibule to account for the prevailing winds.  MSR’s design hutzpah is written all over this simple yet very clever vestibule. 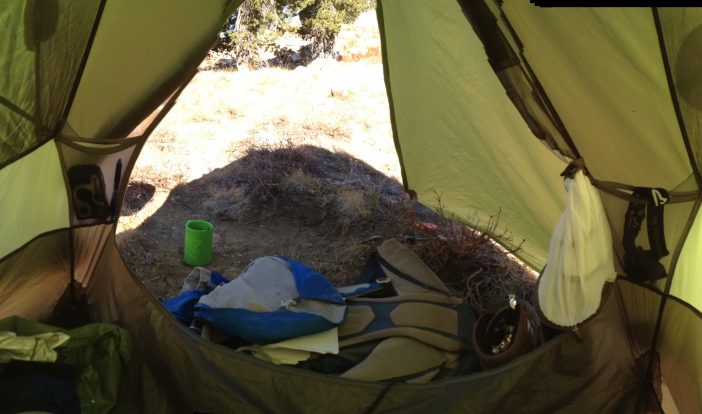 The Nook is average when it comes to weight and vestibule size, but we’re going to rattle off a few tents to compare it with.  First of all, it’s important to remember that the Nook is still a superlight tent, so its 3.8lbs is a heck of a lot lighter than a whole class of 5lb tents, but there are still lighter ultralight tents available for the money.  The Nook offers MSR’s famed engineering, so bomber strength and everything balances out.  For example, the Black Diamond Mesa is a also very strong, liveable tent that offers more interior and vestibule space than the Nook, but it comes in at 5lb. 2oz.  On the other side of things, the Tarptent Double Rainbow is an ultralight structure which has more interior space and more vestibule space, yet it only clocks in at 2lb. 10oz.  Lastly, the Nook’s specs are very similar to the Sierra Designs Mojo 2 and costs exactly the same – $400 MSRP.  The Nook is stronger than the Mojo, but the Mojo pitches faster and has an integrated fly.  There’s always a tradeoff. 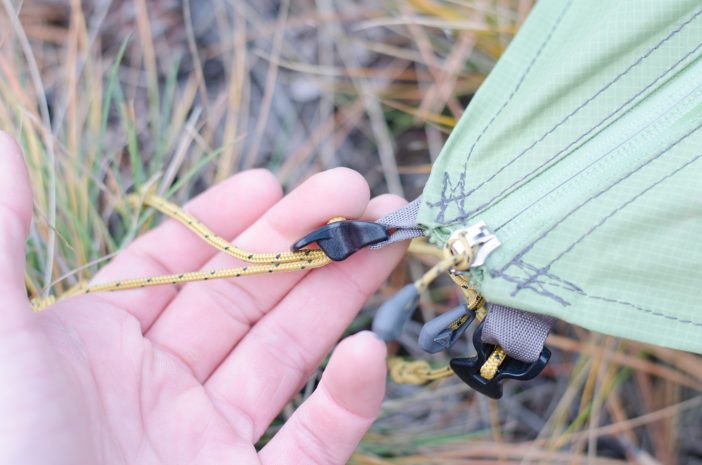 The MSR Nook crams as much liveability into the smallest floorplan that it possibly can and, frankly, it accomplishes that pretty well.  It sets up quickly and, when guyed out, is among the strongest three-season tents.  The Nook has no standout spec’s (average weight, peak height, floor and vestibule space) and might even be on the small side for some of these, but it offers a very well-rounded package.  Buyers can expect great durability and outstanding performance in inclement weather, though I wouldn’t want to wait out a storm inside of the Nook’s green fly.  A host of clever features complements the tents overall good construction and design, especially the solid/mesh combination body.

The MSR Nook is the type of tent that you can buy and enjoy for years – it’s strong, well designed and built from good materials.  Admittedly it’s pretty average when it comes to most of the specs that we traditionally look at, but it’s important to remember that MSR designed the Nook to maximize that limited space and that’s just not something you can understand from a spec sheet.  I recommend the Nook for solo backcountry adventurers who need a strong yet light tent for mountain squalls.