You want your shelter to be lightweight, but not too cramped.  Convenient, but not too complicated.  NEMO’s Hornet 2P targets those two sweet spots for those looking to travel fast and light on the trail.

Yosemite National Park isn’t a bad place to be a gear tester.

Before we start, a disclaimer of sorts: I rarely test 2-person tents with two people.  Rather, since I’m a fairly large guy who tends to be a restless sleeper, I look for sleek 2-person tents that are lightweight enough to travel minimalist, and roomy enough to give me comfortable shelter and a good night’s sleep.

Such was the case with NEMO’s Hornet 2P tent, ostensibly designed for two people to co-habitate, but generally tested by one space-hogging gear reviewer.  It is also available in a 1P version that weighs in about 5 ounces lighter and sells for fifty-dollars cheaper.  For my purposes, choosing the 2P proved to be a good call, because one of the differences of the Hornet in comparison to other tents we’ve tested is that interior space is on the tight side; in the event that I did have someone else I there with me, I’d be afraid of bumping elbows and knees all night.

Full-coverage fly with enough space under the vestibule.

The Hornet series is fundamentally a scaled-down version of NEMO’s popular Blaze series, which are billed as providing the most livable space per weight in their class.  By comparison, the Hornet tents come with slightly lighter weights and significantly lower price points, but the compromise is a downsizing of interior space.  For points of reference, the 2P Blaze has an interior floor area of 30 square feet, and the 2P Hornet has 28.  Most of the lost floor space is at the foot end, where the Hornet tapers into a narrower footprint than at the head. 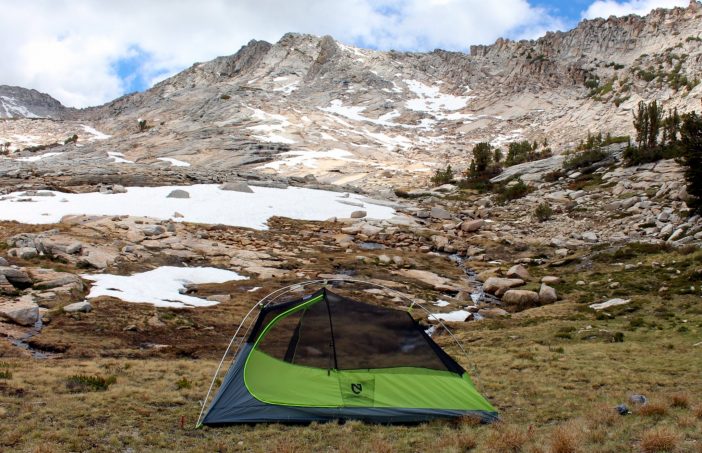 If you did have two people occupying the tent – presuming they aren’t active sleepers – one great feature of the Hornet 2P is the dual side doors, which open very widely in a circular fashion to allow easy access in and out from either side.  Triangulated guyouts provide dual vestibule areas so it’s easy to keep track of whose stuff is who’s, or which occupant of the tent is the messiest.   Dual doors are still somewhat unusual in ultralightweight tents, but NEMO does a great job of incorporating them on the Hornet 2P as well as the Blaze 2P. 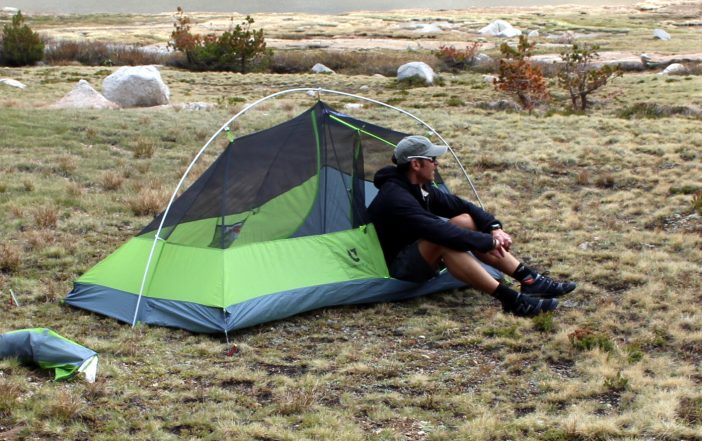 Morning in the High Sierra

Vertical headroom inside the Hornet is just enough to sit up, but is a bit low for moving around away from the center of the tent.  There isn’t a brow pole on the Hornet, so the side walls tend to lean slightly inward toward towards the center ridge pole.   The pole hub is positioned between the side doors, which allows good height in at the entry area, but you’ll feel a bit cramped when sitting up further back in the tent. 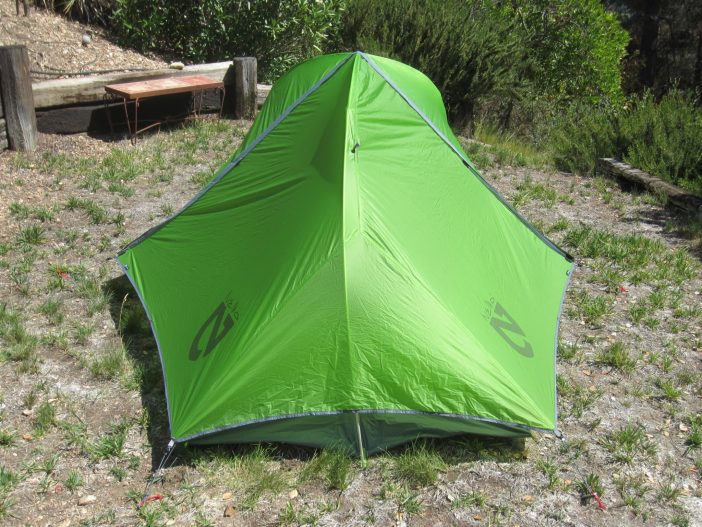 A big contributor to the Hornet’s lightweight specs is the use of 7 denier nylon on the flies, which is less than half the thickness of typical 15D fly covers.  The lighter weight material might shrink the typical three-season window for what temperatures and conditions you’d be comfortable using the Hornet as shelter, but during our testing (exclusively in California and Arizona between April and July) this wasn’t a significant factor.  In fact, much of our time was spent without the using the fly cover at all.

During our testing this summer, the Hornet has proven to be quite convenient to carry in a small overnight pack – it fits easily into a 35L backpack – and ultimately proved to be easy to assemble after a few practice rounds.  Proper positioning of the fly cover isn’t easily intuitive without the instruction sheet, but stays securely in place when correctly aligned.

Throughout the year, we’ve tested three pieces of gear from NEMO Equipment.  For an overall sleep system, we were able to carry the Hornet 2P tent along with the Nocturne sleeping bag and Cosmo Lite pad in a single pack with less than 6lbs of total weight – which makes exploring the backcountry highly convenient without compromising very much comfort at all.  Ultimately for most of us, that’s what makes outdoor exploration so enjoyable.