A quick stop at the Yakima booth yielded a couple of sweet new products that will be introduced in early 2009–something to look forward to.  The battle for bike-carrying supremacy is one of the sweet spots of the roof rack market. Between Yakima and Thule, you’ve got a variety of options to suit your personal tastes and vehicle type.

Hefting a bike on your roof is never an easy task–unless you drive a Mini Cooper–however, sometimes it’s the quickest and easiest way to get your bike from your garage to the trailhead. I’ve been pretty vocal about my love/hate relationship with roof racks. In my 15 years of using roof-mounted bike racks, I’ve done the inevitable bike-garage collision one time. Yes, it happens to the best of us. Still, the roof remains one of the best ways to transport bikes. 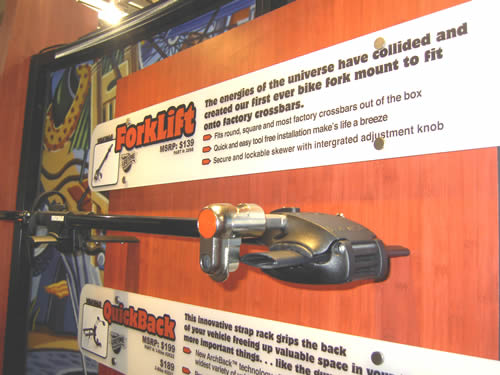 As factory roof racks have gotten burlier and burlier, we have all wondered why you still have to attach aftermarket crossbars in order to attach a sturdy bike rack. Well, Yakima has been questioning the same thing and appears to have cracked that nut with the introduction of the new Yakima ForkLift bike rack.

This new fork-mount rack employs the proven one-handed skewer lever with an innovative new dual-channel tray design. But, the best feature of the ForkLift is its ability to mount to nearly any factory crossbar on the market without adapters, etc.  The hart of the design is the hinged front and rear mount that is flexible enough to attach securely to oval or round crossbars–even the burly crossbars found on vehicles like the Nissan XTerra.

Not only is this rack flexible in its design, it also effectively drops the price of entry for bike racks by several hundred bucks since you no longer need to buy crossbars, mounting feet and locks just to get a bike rack. At $139, it represents a solid price for this type of off-the-shelf compatibility.

The only downside is that it’s only compatible with 9mm QR front forks. So, if you’re planning on moving with the rest of the mountain bike industry and switching to the 15mm or lightweight 20mm front axle, you’ll have to look elsewhere. Still, roadies will enjoy this rack for the foreseeable future. 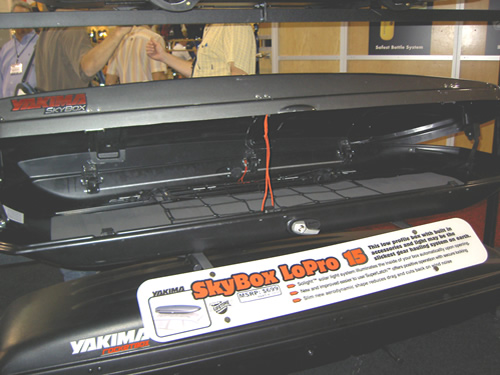 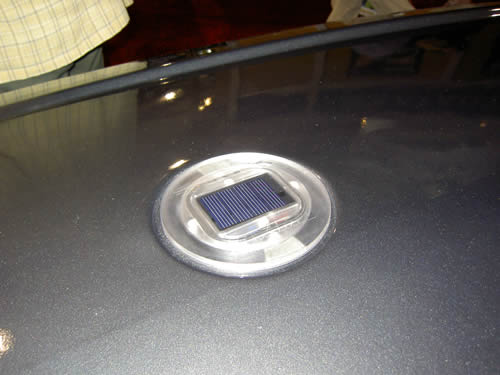 Cargo boxes are an absolute necessity. With gas prices where they are and will continue to be, it makes sense to use smaller vehicles and expand their carrying capacity by using a cargo box. Not only are they lifesavers when hauling the family’s gear, they come in handy in the winter when transporting skis, snowboards, poles or wet, sloppy gear.

Once again, Yakima and Thule battle things out for rooftop box superiority. The new SkyBox LoPro 15 raises the bar once more and tips the scales in Yakima’s favor. With a cool-looking and gas-saving low profile design, the LoPro will look sexy on top of just about any high-end vehicle.

Also cool is the solar-powered interior LED light, which will certainly come in handy once the sun goes down or on early-morning dawn patrols when searching for that elusive second pole.  The new lid latch is as intuitive and easy-to-use as they come.