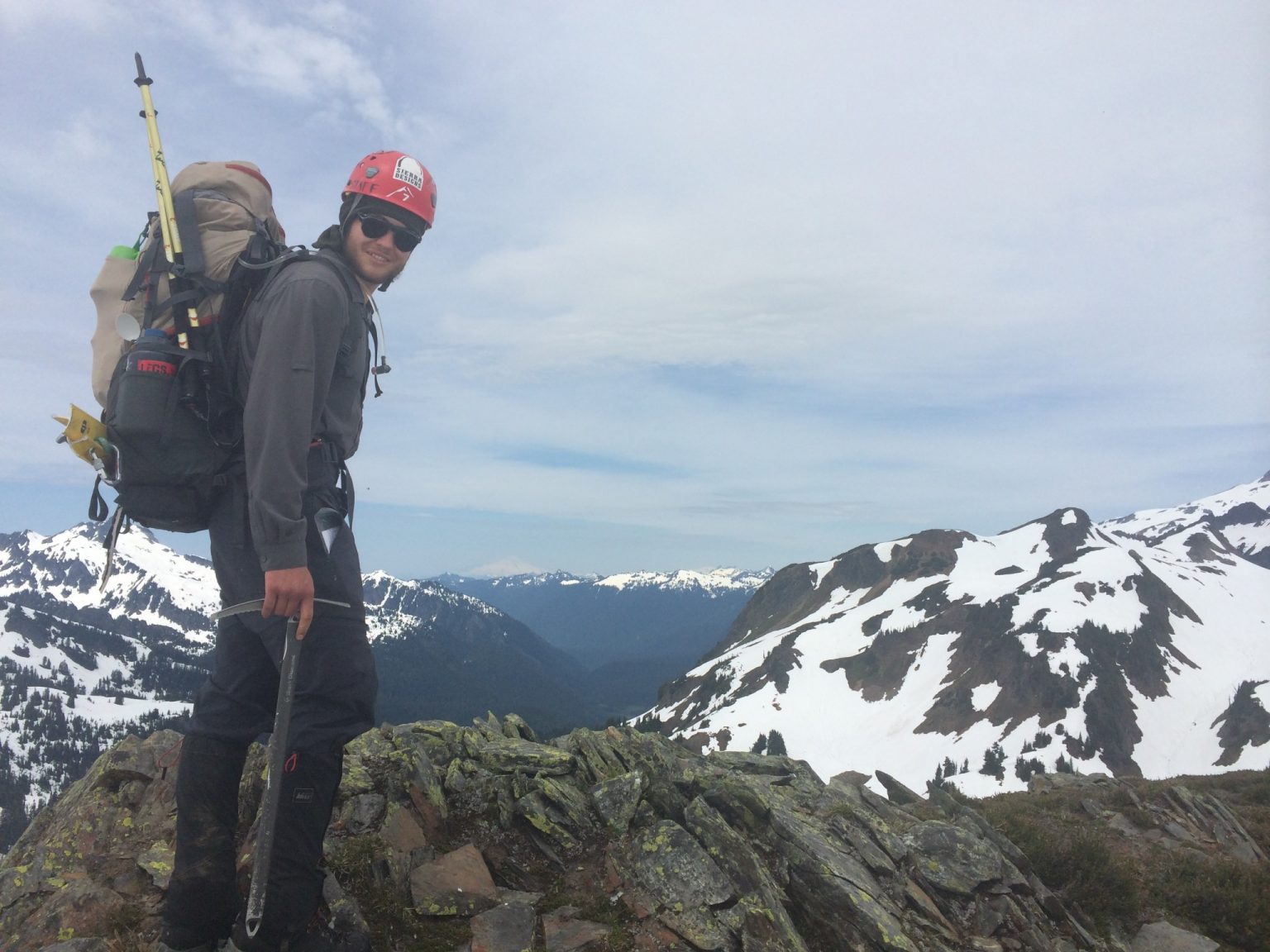 High Country News recently published an article on the death of backpacking.  Backpacking, they say, is on the way out – kids aren’t interested and, what’s more, the one-day-conquest is becoming the preferred outdoor experience.  With a future like that, what’s the point of making an 82 liter pack like the Conness from The North Face?  Over the last three months I’ve headed out into the Northwest to answer that very question. 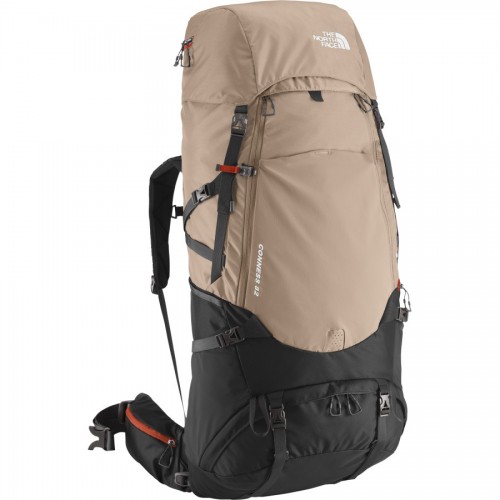 The Conness 82 was built with fairly simple parameters in mind: comfort, hauling capacity and technical performance.  My test period took me everywhere from the Alpine Lakes wilderness to the top of Mount Baker – The North Face promises a comfy haul no matter what the terrain, so the Conness definitely has been pushed hard over the last few months.

Though there’s plenty to talk about with a pack like this, we might as well jump in with the foundation itself – the frame design.  The North Face has branded its frame ‘X Radial,’ so you’d imagine that the frame features a nice ‘x’ of aluminum support beams.  Well, the truth is, you don’t really want to have the crux of an ‘x’ sticking into your back.  The North Face’s solution is straightforward yet effective: there are two round aluminum poles coming down from the center of the back radiating out towards the hips.  The function of these two poles is to help support the load while still allowing the backpack to move with the motions of your hips.  The second set of poles picks up near the center of the back where the lower poles leave off, but these poles are flattened and they just run straight up the back behind the shoulder harness.  These are the real meat-and-potatos when it comes to keeping the load distributed well along the frame.  Backing all of this up is a tough sheet of plastic that has a slight flex to it for support and load distribution. 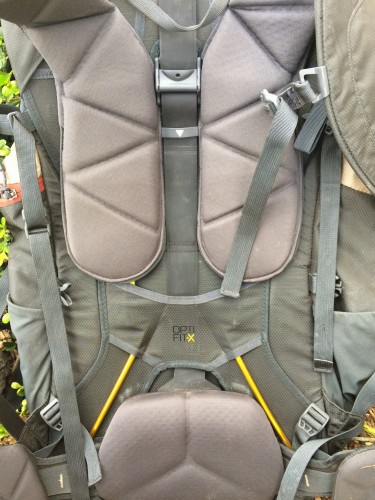 Just as important as the back panel is the design of the waist belt.  The North Face installed a wide, flat hip belt with a moderate-density foam.  Initially I was a little concerned that the hip belt wouldn’t fit well.  After all, it’s not pre-curved like most modern heavy-hauling packs are; the wings just flop out to the sides when not in use.  Fortunately, my fears were groundless – the hip belt is so wide that it’s easy to cinch it tight without causing any undue irritation or discomfort.  Extra kudos to The North Face for picking such an excellent foam density for the hip belt padding.   It really strikes the balance between support and comfort.

The shoulder harnesses are one area that The North Face tried to cut out a few ounces.  They’re not very heavily padded but they mold over the shoulders and chest very comfortably.  The North Face really relies on having an excellent waist belt to carry virtually all of the load as these shoulder straps would probably shirk at carrying even 20% of the load.  That said, I’ve had some very heavy days with this backpack and they’ve never bothered me. 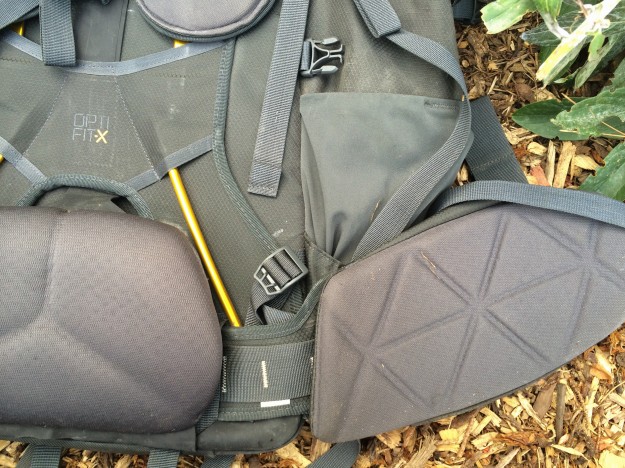 Having a well-designed backpack frame doesn’t mean a thing if it doesn’t fit well.  Realizing this, The North Face took pains to make the backpack fit a wide range of users with what they call the ‘Opti-Fit X’ system.  I don’t make up these names.  However, as the name implies, you can manipulate the suspension to give you the optimum fit tailored exactly to your body’s shape.  The shoulder harness slides up and down a belt and locks into place with a simple friction device.  I can imagine that, over years of use, this friction device would begin to slip on the belt but for now it’s not an issue.  Similarly, the hip belt can be expanded by undoing the Velcro on the main lumbar pad, and then wiggling the belts out to the desired length.

While it’s easy to get lost or confused by the intricate construction that goes into modern internal frame pack design, things can always be simplified by looking at their real-world performance.  The Conness has been with me through just about everything over the last few months – it’s scrambled with me to rocky peaks in Okanogan and it’s also bore the load of my young clients’ pack contents when they got too tired to continue.  All told, I’ve spent plenty of days with the pack loaded into the 50 pound range and let me tell you, they’ve been long and hot days.  The bottom line is simple: the Conness strikes the right balance between supporting heavy loads and still moving with you during technical stuff.  No, it’s not as versatile as something like the Gregory Contour we covered last year (with its pivoting hip belt wings) but it can still keep up with you if you have to pull out the odd class V move. 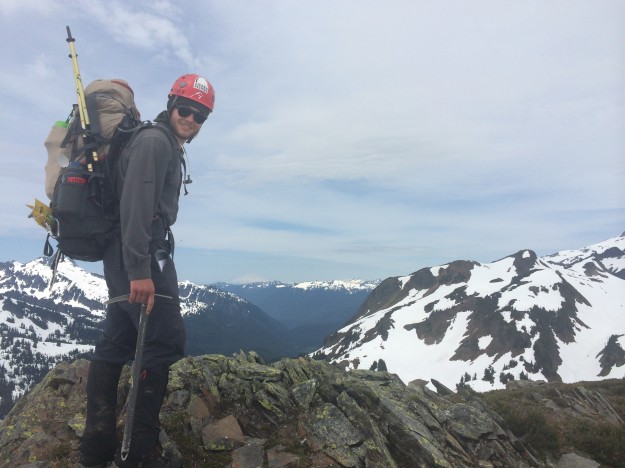 Lastly, airflow – all of that great load carrying ability doesn’t really lend itself to great heights of air movement between your back an the pack.  I’d call the Conness’s overall airflow just average – it’s not an oppressive design and the big cushy lumbar pad does add some space for air to move, but overall I’d saythat airflow was lower on the list of priorities behind load support.

Phew.  That’s all of the techy stuff out of the way – now for the rest of the pack.  The Conness is fundamentally a very simple backpack: a sleeping bag compartment, detachable brain lid, one exterior zippered pocket, one exterior stuff pocket, two front-access zippers, a 2L hydration sleeve and a nice mesh pocket on the inside of the pack.  That’s pretty much it!  Organization is always very important in a backpack and, naturally, some designs are better than others.

This is another place that the Conness comes in as simply average – the zippered security pocket in the lid is a nice touch but it’s the type of thing that’s tough to access quickly on the trail.  Similarly, the generous zippered mesh pocket on the inside of the front access panel is very handy indeed, but it’s limited to simple things like basic toiletries or emergency supplies.  For my part, I only kept my Gold Bond, Tenacious Tape, contact lens equipment and a bit of paracord in that pocket.  The stuff pocket on the outside is much more generous, but I was usually forced to keep a pack cover in there since The North Face failed to include a separate pocket for that. 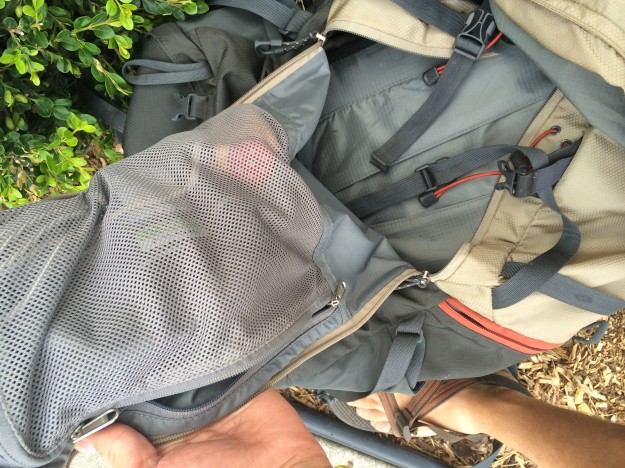 The zippered side pocket above the right water bottle hold is a nice touch, but it’s tough to slide anything in there when the backpack is fully loaded – I was usually limited to my camp spoon and some ibuprofen.  Come to think of it, though, you could easily slide some wands in here and secure them with the compression straps.  The water bottle pockets themselves are elasticized and do a great job at swallowing a Nalgene when the pack is fully loaded.  They’re the right balance between being secure but not being impossible to load up.  You’ll still probably be asking a buddy to get your bottle in and out for you, but at least he won’t sprain his arm trying to do it.

The North Face’s decision to include those large access zippers is an absolute life saver – since they’re on both sides, you can easily access gear that’s tucked away deep in the pack on either side and you can also open up that huge front flap to get at bigger things.  The Conness’ strap design is very good – the side straps are in a Z pattern that tightens evenly and easily, and of course the straps on the brain are easy to horse down on for a really good, snug fit.  This is definitely a backpack than you can cinch down tight and now expect to have any trouble from during the day.  While I’m on the subject, the gear straps on the bottom of the backpack are fantastic – I regularly carried snow pickets and a tent down there and the straps do a really good job of tightening up easily without unnecessary finagling. 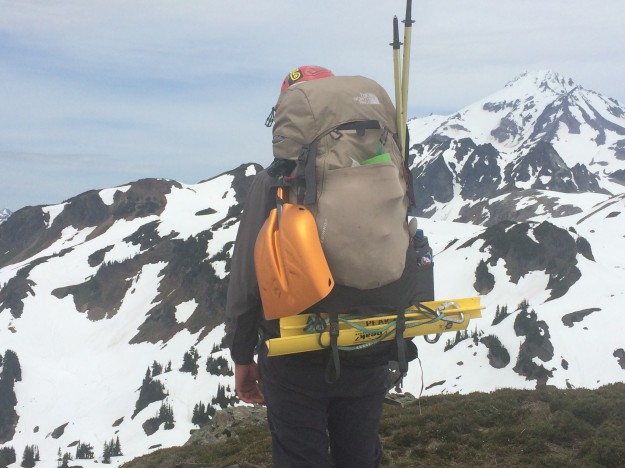 I do have a few complaints to make about the Conness, both in regards to design and construction.  For one thing, simple quality control was lacking on my particular model: the sternum strap is attached to the rail backwards when I received the pack – a quick fix for me, but definitely something that should have been caught if the pack is going to sell at this price point.

Throughout the course of my testing, I managed to break one buckle and I can’t say that that’s normal for a backpack like this. The Conness’ buckles are, as a whole, more concerned with shaving ounces than offering bomber strength.  Lastly, strap creep has been a big issue throughout testing.  The shoulder harness straps are the worst offenders and they were chronically loosening throughout the day.  The hip belt wasn’t as bad, but the load tensioner straps and sternum strap seemed to give way almost without a fight.  Frequently this sort of thing gets better with time as the pack straps get broken in (and dirty), but not so with the Conness.  This is something The North Face needs to fix.  Lastly, the Conness’s relatively slim profile leaves it with a very small footprint and it can’t stand up on its own – it always needs to be leaned on something.

Like any good hero, the Conness 82 is a wonderful character that manages to have a few flaws to balance out its admirable traits.  It performs its main duties very well — namely hauling heavy loads, being stable and comfortable — but it has a few niggles that keep me from going all-in.  The strap creep is beyond what I’d normally call acceptable and I wasn’t impressed by that broken buckle halfway through testing.  That said, it’s just so awfully comfortable to wear.  I’d recommend other backpacks for people who are looking to stay on maintained trail, but if you’re going over some sketchy stuff that involves all four limbs, the Conness is a great fit for technical trips where lots of gear is necessary.