Lots of great trail runners at the show this year… oodles in fact. An entirely new trail running shoe is coming this Spring from La Sportiva. Not to be lumped with the crowd, La Sportiva has actually defined their own category that they dubbed Mountain Running®. That said, La Sportiva has a wide array of shoes for trail… err… mountain running.

La Sportiva has been around the block and knows a thing or two about making great hiking boots, mountaineering boots, trail shoes and climbing shoes. That experience heavily influences their mountain running line and provides an awesome array of products for loyal La Sportiva customers.

The Wildcat is new for Spring 2009 with a Gore-tex version to follow for Fall 2009. This new platform is built for cushioning while providing neutral support. Some of the nice features include a one-piece mesh upper for ventilation, lacing system to adapt to the contours of a myriad of foot types and a built-in scree-guard to keep rocks out of the shoes. Tipping the scales at a respectable 12.7 oz each, they aren’t featherweights, but a great weight for everyday running. I should have my hands on a pair for review in the Spring. 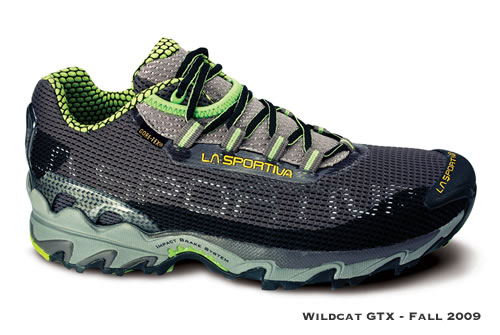