Though I was bummed that my appointment with Salomon’s PR crew didn’t work out (apparently they had a last-minute change), I still wandered through the booth to see what was new in the trail running shoe world. I was able to snap a few photos of a couple of great new or newer shoes in the lineup.

One was a softshell version of the awesome XT Wings shoe and the other a show that I wasn’t familiar with called the XT Hawk. I snapped a couple of pictures of the shoes, but that’s about all the info I’ve got. Once the PR situation gets sorted out at Salomon, hopefully I’ll post an update with more information, but for now… enjoy the pictures.

The refinement of the XT Wings line now includes a softshell Gore-tex version. Now a total of three flavors will be offered: mesh, Gore-tex and Gore-tex softshell. There are plenty of softshell-type trail running shoes on the market today and I really like how they perform in cool or wet weather.

Honestly, I’m a little surprised that they feel there’s a market for two varieties of Gore-tex shoes. It seems like they could go sans Gore in the softshell version to provide a more breathable, yet weather-proof trail runner that would be perfect for Rocky Mountain weather conditions (dry, cool, dry snow, light rain)  Whatever your running conditions are, there’s bound to be an XT Wings style to suit them. 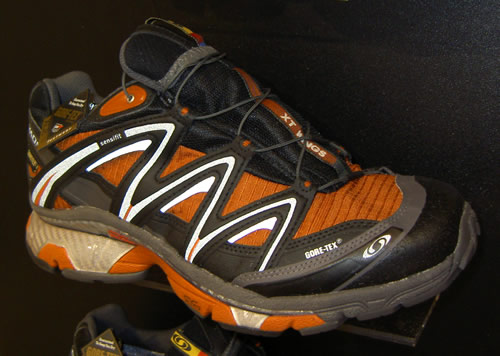 A recent introduction to the line, the Salomon XT Hawk  features a lighter version of the outsole chassis system called ACS Lite (Agile Chassis System) and feels like it’s a tad lighter than the XT Wings. It appears that the little Quicklace garage has been removed and potentially the laces shortened. Looks like a great trail runner that’s not quite as supportive as the XT Wings, but should be a little swifter on-trail.

ShareTweet
outdoor retailer salomon
Previous ArticleSkiing Mt. Superior: A Video by Piton Productions
Next Article Getting Your Fix with the Powderwhores: The Pact