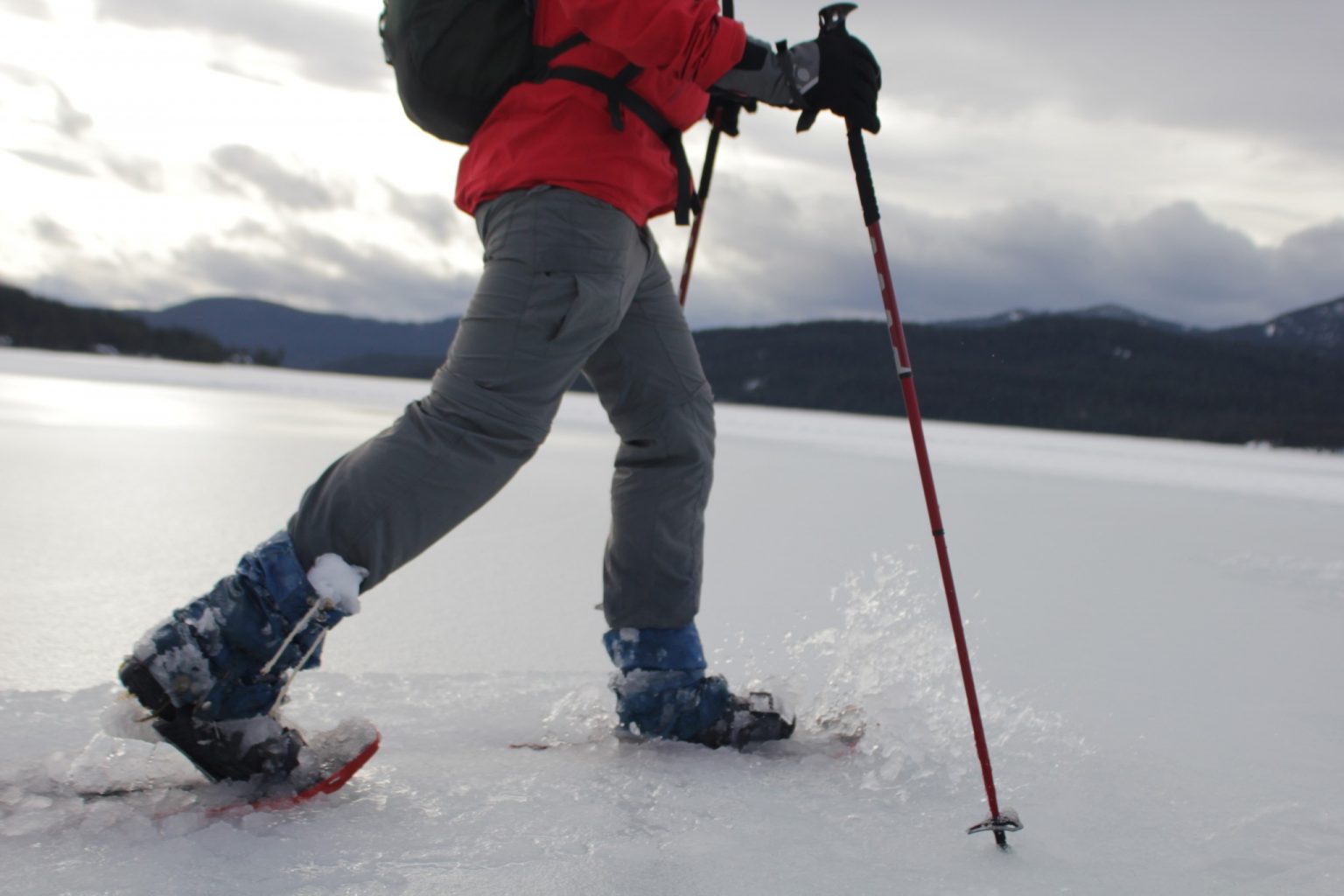 It seems that just about every snowshoe review you read nowadays starts off by talking about how snowshoes are ancient technology that mankind has been using for thousands of years.  I’m not going to bother doing that – MSR‘s Lightning Axis snowshoes are modern marvels with more bells and whistles than you can shake a mukluk at.

Lightning Axis is Made-in-America, with Love

As everyone is well aware, MSR is a pillar of the gear world.  Their name reaches to the most remote wilderness and their snowshoes will be happy to take you there.  I’m covering the Lightning Axis model, which is a new take on their older Lightning Ascents.  The Axis is built around a one piece aluminum frame, a PU-coated nylon deck and, the star of the show, MSR’s new Speedlock Comfort binding system.  I’ve been testing the shoes throughout the Inland Northwest and, while it’s been a rough year for snow, I was still able to find some epic powder in isolated North Idaho’s backcountry.

We might as well jump right in with MSR’s unique binding system, which they hail as ‘a giant leap forward in showshoeing performance, ease and comfort.’  No one really trusts advertising fluff, but there’s definitely truth behind the hyperbole: the Speedlock system solves an age-old snowshoe quandary.  If your step is slightly toed inward or outward, normal snowshoes will exaggerate that angle until it becomes a problem for maintaining a normal gait.

MSR’s solution is refreshingly simple but it cuts right to the quick of the issue.  The entire binding is mounted upon a plate that can swivel a few degrees left or right. It does this by using a simple sprung peg that pulls via a cord which stows away in a slot beneath your foot.  It’s exceptionally simple to operate and provides an essential fix to an issue that’s especially relevant on longer snowshoes.  There is one small problem, though – after two months of pretty heavy use, I can no longer adjust the bindings due to either rust or grit between the binding and the plate upon which they rotate.  So, the take-home message is this – within the first trip or so, make sure that you figure out where you need the angle adjusted to.

While the ‘Comfort’ part of ‘Speedlock Comfort’ is a great feature, there’s a whole lot more here to talk about than the bindings.  Much of the industry uses a nylon webbing/ratchet/friction lock system that, when done well, will tighten quickly with one hand.  MSR’s solution is more utilitarian and, while not perfect, I’d call it one of the more reliable systems for the backcountry. My friends have snowshoes with nylon bindings and, on days with tougher conditions, the bindings begin to suffer as nylon is prone to picking up moisture; additionally, the MSR system doesn’t make use of complicated ratchets which can drop screws or rivets.

The toe binding is unique in the industry and it’s designed to be fitted at home and then simply kicked into on the trail; basically, you fit the binding to the toe of your boots at home and then tighten them up just a tad more.  Once they’re set right they never slip or give unexpectedly.  My only quarrel with the system is that the big, fat toe strap tends to catch on the decking when you step on steep terrain, and it’s exaggerated the fraying in matching areas on my snowshoes.  There’s also an optional instep strap which I usually opted to use due to the extra security and efficiency.  The final strap is, of course, the heel strap – I was lucky to be using boots that have a built-in bale for the strap to rest on but, regardless, it’s easy to horse the strap down hard for a tight fit.  Overall, I was happy with the binding performance: the straps stay pliable and aren’t affected by moisture, though they do tend to creep off of their settings unless they’re fastened very tightly.  There’s plenty of strap, so it’s easy to pull it tight with gloves on; ultralighters may opt to trim off some of the excess strap.

The bindings are a big part of the Lightning Axis’ design, but there’s a lot more going on here than that.  MSR makes the snowhoe frame out of a single piece of riveted aircraft-grade aluminum imbued with with epic teeth and buttressed by two aggressively-toothed crossmembers.  Moreover, MSR’s crampons are made out of steel that, so far, has yet to dull significantly or show much wear beyond removing the protective coating.  On that note, the bottom of the binding where the crampon plate is located is prone to rust because it’s a contact area between the plate and the frame.  This isn’t  performance issue at all, but it’s a bit disconcerting to see rust on your snowshoes after the first day of use.

Rounding off the Lightning Axis’ design features, we find MSR’s special Televators, which are shaped so that they’re easy to flip up with poles or a gloved finger.  The PU-coated nylon deck is riveted to the frame at twenty locations to reduce the likelihood of stress failures.  Finally, the decking has a reinforced patch on the heel strike area. 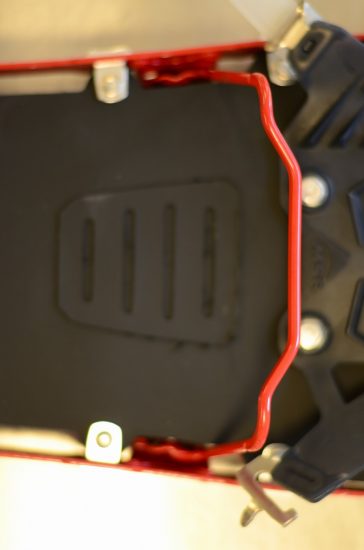 Alrighty, we’ve covered all of our bases – now it’s time to talk about how the Lightning Axis actually performs in the hills.  I weigh 180 pounds and my winter pack weight is usually around 35 pounds for an overnighter.  The 25 inch models that I tested are rated to support 225 lbs of weight, so in theory I was set for just about any adventure.  My testing ranged from the packed snowshoe trail up Mt. Spokane to alpine assaults of solitary backcountry stashes in Northern Idaho.  It’s been a rough year for snow which has hindered my testing somewhat, but it’s just another excuse to travel out of Spokane to find great new country.

One of my first testing trips was an epic powder day near Priest Lake; talk about a slog.  We gained around 2,000 vertical feet in deep, deep powder to be rewarded with an amazing view of the lake; the trip showed off the MSR’s flotation, but didn’t do a whole lot for traction.  I was able to see how grippy these shoes another day on a thin, icy surface that really tested the 360 traction surface; the Lightning Axis is covered in traction from just about every angle, so you can put your feet down on funky surface with a lot of confidence that your foot will hold.  The steel crampons provide epic traction  on steep climbs and, on the whole, these snowshoes are remarkably capable on slippery terrain.  I felt very comfortable (that’s a relative term) ascending steep, icy chutes with the Lightning Axis underfoot – the two crossmembers really add a lot to climbing traction as well.  MSR’s Televators are some of the best heel bails to be found – they pop up easily yet stay in place and are indispensable on long climbs.  This design is, by nature, many times more capable of tackling steep, icy terrain than tubular-frame shoes.

Lastly, a word about weight – the MSR Lightning Axis 25 inch is right in the middle of the pack at 4 pounds 3 ounces.  A few shoes, like the Crescent Moon Silver 10, weigh a few ounces less while several other models, like the Tubbs Xpedition and the Faber Mountain Expert all clock in a few ounces heavier.

There are tons of options for people looking to get outside and onto the snow – MSR’s option just happens to be one of the best.  Their traction is impossible to argue with and, for their weight and size, they provide very respectable flotation.  I’m a fan of the binding system since my own gait benefited from a small adjustment and I love that these snowshoes are made in the USA.

Buy now: Available from Backcountry.com (On sale now for $179)